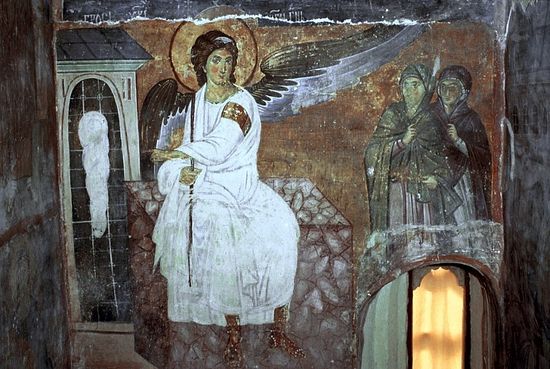 
The word ‘angel’ comes from the Greek ‘angelos’, which means ‘a messenger’. As far as we are concerned, in the way in which we are related to the angels, they enter into our life as messengers of God. This does not mean that there is not in the angels an essence of their own, their own essential being, and that they are nothing but messengers. They are related as messengers to us; they are related to God as his own creatures which have already attained a measure of perfection and which grow eternally, endlessly into a deeper and more perfect communion with their Maker. Anyhow tonight my intention is not to speak of the angels in their essential being, but to speak of them as they appear in the scriptures and in the liturgical texts in relation to the world in which we live, to mankind and its destinies.

There are several ways in which one can be a messenger. One can receive a message in which one does not participate, which remains a thought, a will, which is different from that of the messenger and conveyed to him who is to receive it and capable of receiving it. There is a way of being a messenger by being entrusted with the thought, the will, the intention of God and commanded creatively, that is, with the full and complete participation of all one’s being, to convey it. There is also a way in which the message and the person can become so perfectly identified that the person and the message coincide and that the revelation is as much in the messenger as it is in the words proclaimed by him <…>

A message may be brought, declared, left, as it were, with the recipient. Something which is an experience of life may be interpreted, explained, unfolded before him who is already in possession of this inner knowledge. An angel may also act and not only speak. But whichever way the messenger appears, one can see in the Old Testament as well as in the New, that a message is an act of God about to happen. A message is a warning, a declaration of something that will occur soon. You remember the angel that appears to Zacharias at the beginning of St Luke’s Gospel and to the Mother of God with the promise of the birth of St John the Baptist to the one and of the Incarnation of the Son of God to the other. You may remember also in the Book of Job the passage in the 33rd chapter in which Job longs for a mediator, an interpreter of the will of God. He is confronted with this mystery. He cannot understand the ways of God, and, apart from the intercessor who is mentioned in the 9th chapter of this book, he also longs for an interpreter: one who would make sense of the mystery which confronts him, challenges him, crushes him indeed and remains unrevealed.

In the Old and New Testaments the word ‘angel’ may be used with the definite article or with the indefinite article, and some writers – and this is the opinion nowadays of a great many of the students of the Bible – see a difference in what is being conveyed. ‘An angel’ in all the various passages speaks of a concrete being, someone who appears in the form of man, someone who can be seen, someone who can be spoken to and heard, someone who can be touched and can touch. In other passages the expression ‘the angel of the Lord’ may (not always) signify a message coming from the Lord with such directness and certainty that there is no doubt that it is a divine message, and yet no description is given of a celestial being bringing and conveying the message.

In the beginning of St Matthew's Gospel we are confronted with a dream of Josephus. We are not told of a concrete vision of an angel in the same plastic terms. It seems that the expression is used to convey a certainty, the certainty of a message that comes from God.

St Gregory Palamas spoke of angels in one of his works. He calls them ‘second lights’. By this he means – and my translation is very unsatisfactory – that God is light, the only true Light, the light which is the origin of all light, which enlightens every man that comes into the world, and that the creatures of God, in order to become children of light, must lose, indeed must free themselves from their opacity in order to become translucent and transparent so that the light which is God himself should flow into them, pervade them to the core, and that they should become such that this light divine received by them unadulterated should be transmitted to others. 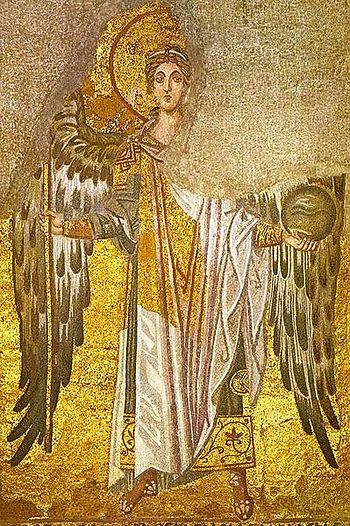 He sees the angels as secondary sources of light because they are of perfect transparency, they receive all divine gifts without appropriating any of them to themselves; they live by this flow of divine grace, divine light, divine presence without trying to retain it, and handing it on from hand to hand, as it were. There is an ancient vision of things that teaches us that this light flows from its original and unique source, which is God, through the ranks of angels down from one step to another in a cascade to the earthly created world in which it is also received to the extent to which we are or become less opaque, more translucent, more transparent, capable first of receiving the light, participating in it, and freely giving it farther and farther.

The experience of the Christians, the faith of the Church has spoken also – and this can be referred to the book of Revelation – of angels guardians of human lives and souls, of angels that stand as the guardians of human communities and places, temples, cities. The term has evolved also to speak not only of the messengers but also of him who stands in God’s own name as a mediator, an intercessor, an interpreter of the truth of God, one who proclaims that none is like God, one who proclaims that God is strong, one who proclaims that God heals, who proclaims the greatness of God, who calls to prayer, who praises God in the name of his Church, who brings down in sacraments and blessing the divine gifts upon men. This is the link between the use of the word angel, angelos, applied to the heavenly powers and the use which St John the Divine makes of it in the Book of Revelation when he calls the angels of the seven churches the bishops that stand at the head of the human community. 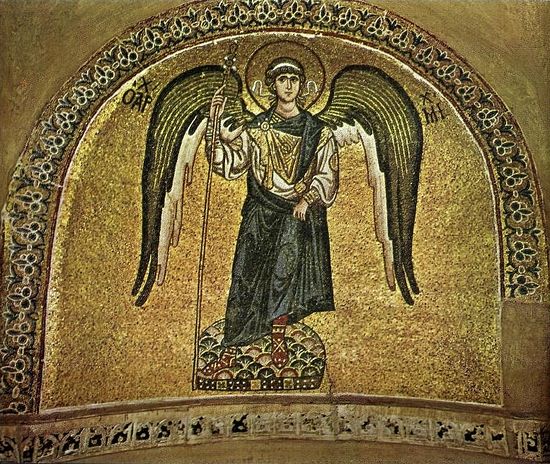 Archangel Michael. Mosaic of the Monastery of Daphni. Greece

As you see, there is a vast range of notions and experience which is held both by the Old and the New Testament on the one hand and on the other hand by the tradition of pre-Christian and post-Christian Israel concerning the angels. The expression speaks of a concrete, intense, palpable, tangible experience of the Living God, the Holy Trinity, the Son of God, the Spirit of God, of the concreteness and undoubted certainty of the message received: the dream of Joseph and several dreams of the Old Testament, of concrete, active, personal messengers, in word or in deed, sent by God, Gabriel, the angels that saved Peter and Paul from prison, and also these heavenly powers whom God has appointed to teach, to guide us, to help us to find our way. The names matter. The reality matters. And when we celebrate services for their feasts, we are not speaking of symbols; we are entering into a deep relationship with real and concrete realities but realities which perhaps with more challenging violence, with a claim more powerful than human sanctity, confront us with our vocation to be God’s own. More than the human saints they compel us to stand face to face with a message of God which in them is fully realised, with a call of God to receive from him a fulfillment which we can see in them and of which they are the certainty and the guarantee.

The Archangels
The Archangel Michael is the outstanding figure in the eyes of the Greek Orthodox Church and is depicted in the many houses of worship in an icon always on the extreme left where he is pictured as a guardian of Paradise from whence Adam and Eve were evicted. In some icons he is seen with a flaming sword as a symbol of the righteousness that called for the casting out of the Garden of Eden of Adam and Eve after they had fallen victim to Satan in the form of a serpent.