Holy Hierarch Birinus, Bishop of Dorchester-on-Thames and Apostle of Wessex 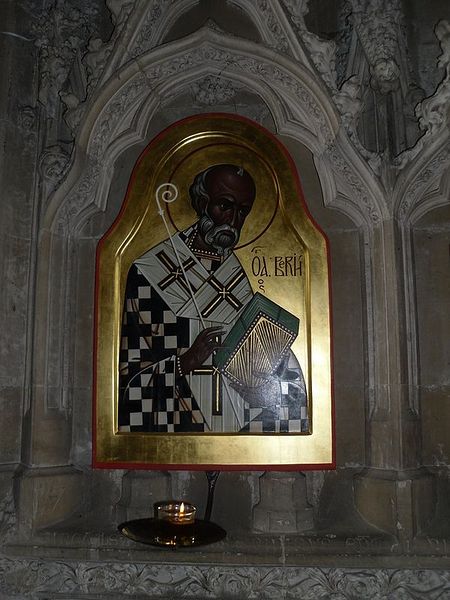 Icon of St. Birinus in the Winchester Cathedral. Photo: I. Lapa.

As a result of the invasion of eastern Britain by pagan Angles, Saxons and Jutes, by the 7th century seven small kingdoms had formed on its territory. These were the kingdoms of Kent, Northumbria, East Anglia, Mercia, Essex, Wessex, and Sussex. During the 7th century all of them accepted Christianity one after another. Wessex (the Kingdom of the West Saxons) was founded in the south and south-west of England. It gradually took lands from other kingdoms and by the 10th century it had become so powerful that it had formed the one large Kingdom of England. St Birinus is venerated as the Apostle of the Kingdom of the West Saxons.

The future hierarch was probably born in Lombardy in c. 600. Unfortunately, nothing is known about his childhood and early years, but he lived as a monk in Rome some time before becoming a bishop. In the year 634 in Genoa, Archbishop Asterius consecrated him bishop and in the same year Pope Honorius sent him to Britain, which was then still mostly pagan. In 635 the bishop successfully reached the shores of Albion and landed in the port of Southampton on the south coast of Britain, in the Kingdom of Wessex. He intended to go further inland where there were no missionaries, but since he met only pagans in Wessex, he realized that he must remain there. Moving from settlement to settlement, he preached the Word of God, healing the sick, working numerous miracles and converting many pagans to the Christian faith. 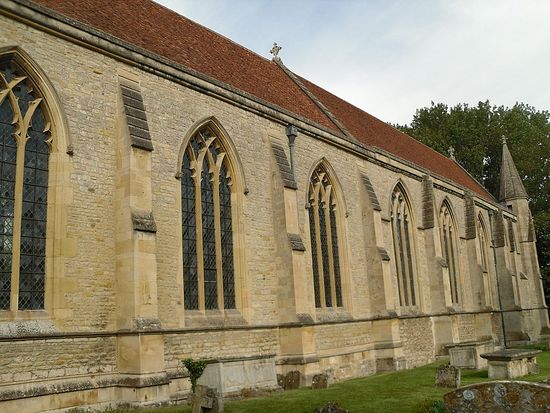 At that time Wessex was ruled by King Cynegils, who was still a pagan. Bishop Birinus made for the royal estates of Wessex, which were situated in the region of the Berkshire Downs. The king allowed him to stay on his lands and even agreed to meet him in a place called Churn Knob—now by the small town of Blewbury in Berkshire. During the meeting Bishop Birinus told the king about Christ for the first time. Soon after this Cynegils, enlightened by the grace of God, decided to embrace Christianity and was baptised; he also gave Bishop Birinus the Roman town of Dorcis (the present-day Dorchester-on-Thames) to found his See there. This town, now in the county of Oxfordshire, became the centre of Bishop Birinus’ mission. Over the 15 years of his active missionary labours in Wessex, Bishop Birinus baptised many people of the kingdom. The hierarch was energetically supported by King Cynegils, whom the saint had converted to Christ. Thanks to the fruitful works of Bishop Birinus the Christian faith spread very quickly all over Wessex and was even taken to other parts of southern and western England.

Among the churches founded by the Apostle of Wessex we should mention the church of the Holy Virgin in Reading (Berkshire), St. Helen’s church in Abingdon (Oxfordshire) as well as the church in the village of Taplow (Buckinghamshire), where the saint performed a mass baptism in Bapsey Pool. (All these churches, though rebuilt during the following centuries, exist to this day, and Bapsey Pool has survived as well). In 648, the successor of Cynegils, King Cenwalh, invited Bishop Birinus to found and consecrate the new cathedral in Winchester. As Winchester was an important political centre, it later became the major spiritual centre of Wessex as well. 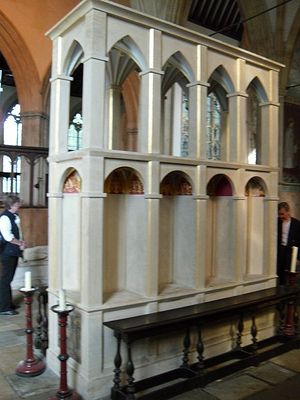 Restored Shrine of St. Birinus in the Dorchester Abbey.
Bishop Birinus reposed on 3 December 649 (or 650) and was buried in Dorchester.

After his repose he was at once venerated as a saint. Late in the 7th century, the future St. Hedda of Winchester translated part of St. Birinus’ relics to Winchester. Numerous miracles occurred at his relics and pilgrims flocked to them. In 1140, on the site of the first early English foundation of St. Birinus, a new, Augustinian monastery appeared. This monastery existed until the Reformation. In the 1530s Henry VIII dissolved the Abbey, but the former Abbey church, purchased by the town’s residents, survived. The medieval shrine of St. Birinus was restored as late as 1964. Today this shrine can be found in the south aisle of the Abbey church. And relics of the holy enlightener of Wessex are most likely concealed under the floor of the church. This church also contains some of the oldest stained glass windows in the country. St. Birinus is venerated as the patron-saint of Berkshire and Dorchester-on-Thames to this day. 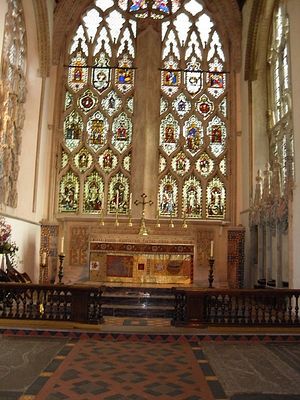 Stained glass above the Altar in the Dorchester.
The holy places associated with St. Birinus preserve his memory to this day. First of all, there is the ancient former monastic church of Sts. Peter and Paul in Dorchester-on-Thames, near Oxford. During the year this large, beautiful and richly decorated church is visited by thousands of pilgrims, and late in June and early in July groups of Orthodox Christians and Christians of other denominations make a pilgrimage here. The church dates from the 12th century with additions from the 14th century. Near the church you can visit the Abbey museum, the Abbey gardens and also the small Roman Catholic church of St. Birinus.

Pilgrimages go to the tiny town of Blewbury as well. The faithful climb Churn Hill on which the Iron Age Churn Knob barrow is situated. This is the very place where St. Birinus first preached Christ to the people of Wessex, after which many came to believe in Christ. Christians also make pilgrimages to the pretty town of Abingdon in Oxfordshire, which claims to be the oldest English town. In this town you can visit St. Helen's church, dating from c. 1100. It is considered to be the second widest church in the country. According to tradition, the first church here was built by St. Birinus, and according to one more ancient tradition, the original church here was founded by the holy Empress Helen herself, who may have visited Britain early in the 4th century with her son, who was proclaimed Emperor in York in 306. Among the treasures of this Church: a medieval statue of St. Birinus, an old stained glass of St. Helen, and unique ancient painting of the “Jesse Tree” on the ceiling of the Lady Chapel.

It should be added that St. Birinus is still specially commemorated at the Winchester Cathedral. This really magnificent and the longest Cathedral of England preserves a memorial Cross of St. Birinus with small fragments of his Shrine; and, in front of it, there is a row of nine Orthodox icons, painted by the Russian iconographer Sergei Fyodorov in the 1990s—the icon of St. Birinus is first on the left. These icons can be found on the west screen of the Cathedral’s retrochoir.

Holy Hierarch Birinus, pray to God for us! Orthodoxy Seems to be Closer and More Comprehensible to Many English People
Interview with Archpriest Mikhail Dudko
Metropolitan Anthony (Bloom) of Sourozh passed away exactly seven years ago August 4, 2003. He founded a unique Russian Orthodox diocese in Great Britain and united not only Russian natives, but thousands of English believers. Even Prince Charles came to his church services. The number of parishioners is still growing as new Russian immigrants are joining them.

Editor10/12/2019 11:57 am
Bro Tablante! Thank you for the suggestion. We will try to find articles on pre-schism Spanish saints. God bless you!

Bro. Tablante10/12/2019 11:20 am
Indeed truly amazing,please feature pre schism Spanish saints. As a Filipino Orthodox with Latino culture it will be beneficial for us spiritually

I am a Spanish professor very interested in the tombs of the Saints.
I spend great part of my time to the investigation of this theme and I possess a great bibliographical documentation and a collection of photos of the tombs and reliquaries of the Saints and Blesseds.

I beg you to provide me by e-mail some photos of the graves of some Brithis and Irish saints. I am very interested in this theme. I beg you to help me.

I thank you for your kindness. I am at your complete disposal.
Yours in Christ Jesus, our Saviour and Lord.
Antonio Barrero (Spain)