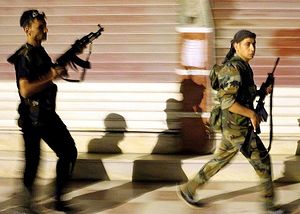 About 20% of 10,000 foreigners, who are fighting on the side of islamist militants in Syria, came there from Western countries, and their number in percentage terms is increasing, reports Strategy Page—an American website, specializing on military themes—with the reference to the information of the Israeli intelligence service.

Besides that, according to estimates of the Israeli secret services, this year no fewer than 15,000 militants of Hezbollah have participated in the fighting in Syria. The majority of them arrived there for several months, as many supporters of Hezbollah in Lebanon have a negative attitude to the fact that fighters from this movement are joining one of the sides of the Syrian conflict.

Strategy Page reports that Britain's reaction to the information on its subjects fighting in Syria was to revoke the passports of 20 of the 240 British Muslims, who, according to information of the Israeli intelligence services, are warring in Syria. This step has provoked protest from British Muslims, but the British government has stated in response that the British citizenship is a privilege and not a right, especially for those who legally hold passports of two states.