Running from assault, abduction, and assassination at the hands of jihadists and FSA rebels, Syria’s ancient Christian community fears a religious pogrom is set to erupt. 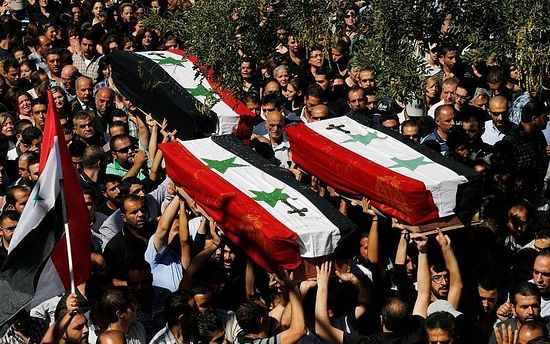 Traumatized by what they have endured inside Syria and fearful for their future, Christians fleeing the 32-month-long civil war say the persecution of Christians is worsening in rebel-held territories in the country’s north—and that the kidnapping, rape and executions of Christians aren’t just being carried out by jihadist groups, but also by other Sunni Muslim rebels, including those affiliated with the Western-backed Free Syrian Army (FSA).

Christian refugees who have recently arrived in southeast Turkey—many of whom are retreading the steps of their forebears, who fled persecution in southern Turkey during the last century—say Christians are being seen as fair game by an assortment of jihadists and Islamist rebels, including FSA-affiliated fighters and others with the Army of Islam. Most of the targeting of Syrian Christians has been blamed on al Qaeda affiliates Jabhat al-Nusra and the Islamic State of Syria and Sham (ISIS), but refugees like 45-year-old school director Rahel say the picture inside is more confused.

She says jihadists weren’t in her predominantly Christian hamlet of al-Yakubiye in Syria’s northwest province of Idlib. FSA fighters from neighboring Sunni Muslim villages were the problem.

Back in February, the news agency AFP wrote about al-Yakubiye, noting that although one of the three churches had been looted, relations between Syrian Sunni Muslims and local Christians were cordial. But in the intervening months, nearly all Christians have fled after half a dozen were executed with their heads chopped off and about 20 more were kidnapped. The evacuation of al-Yakubiye has added to a Christian exodus which is prompting fears that the civil war could spell the doom of Syrian Christianity.

“Al Nusra didn’t come to our village; the people who came were from villages close by, and they were Free Syrian Army,” Rahel says. Christians were targeted because they were seen as being pro-Assad, although she added some of the persecution was motivated also by greed, with the better-off being picked off first and their property divided by powerful local Sunni Muslim families.

Sitting on the terrace of a restored stone house in the small Turkish town of Midyat, where she lives for free along with her husband and four children thanks to a local Christian charity, Rahel says she can see no future for Christians in Syria. She says that the last few months have taught her one thing: “It is not possible for Christians to live there anymore.”

Her 53-year-old husband remained silent during the interview. According to Rahel he is suffering from shock. “He hardly sleeps and when he does he’s plagued by nightmares. Last week we heard about a relative being kidnapped.”

From the earliest days of Christianity, Christians have lived and worshipped in Syria. But the civil war has seen half-a-million flee—nearly a quarter of Syria’s Christians—with more arriving in Turkey and Lebanon each day.

Nearly 300 have sought sanctuary in the small town of Midyat and surrounding villages in the Tur Abdin region, less than 30 miles from the border. Tur Abdin is the historic heartland of the Syriac Orthodox church and the area is dotted with ancient churches and monasteries; one was founded in 397 AD.

The Christians’ biggest concern when it comes to Syria is an eventual rebel victory. They point to what happened in neighboring Iraq after the fall of Saddam Hussein, where sectarian killings, persecution of Christians and an increasingly Islamist political culture more than half of the Iraqi Christian population to flee.

Before the civil war, Syria had an estimated Christian population of 2.5 million. The largest denomination is the Greek Orthodox Church, but there are also Catholics and Syriac Christians as well as Protestants and adherents of the Assyrian Church of the East. The Western-backed political opposition group, the Syrian National Coalition, has sought to allay Christian fears, although to little avail as more Christian villages and towns are affected and massacres are reported.

Many of the Christian refugees arriving in Lebanon are traumatized, says Najla Chahda of Caritas, the Catholic relief agency. “A lot of them are sharing with us some really horrible stories that some fundamentalists approached them, forced them to pay some rent, or amount of money that they don’t have,” Chahda said. “So they are just afraid and left.”

Stories have included forced conversion to Islam and churches being desecrated in this vicious sectarian conflict. Several clergy have been abducted, including two bishops, and in villages in Homs province, large numbers of Christians have been forced from their homes and farms. One of the worst atrocities was reported earlier this month with the Syriac Orthodox Archbishop of Homs, Selwanos Boutros Alnemeh, accusing al Qaeda-backed jihadists of killing more than 40 Christians during their occupation of the town of Sadad, north of Damascus.

“All the houses of Sadad were robbed and property looted,” Archbishop Alnemeh said in a statement. “The churches are damaged and desecrated, deprived of old books and precious furniture. Schools, government buildings, municipal buildings have been destroyed.”

Some Christian leaders in the West and in neighboring Lebanon have criticized the Middle East’s Christian patriarchs for appearing to side with Assad in the civil war, saying they are partly responsible for what is befalling their adherents.

“Unfortunately, the Christians have tied their fate not only to the regime but to Bashar al-Assad—and what I am afraid of is like what happened in Iraq,” says Basem Shabb, a Lebanese lawmaker and the only Protestant in Lebanon’s Parliament. He argues, “The Christians in Iraq were persecuted not because they were Christians but because they supported the regime.”

Heyfa, a 50-year-old mother of three girls and a boy, from a small village south of the Kurdish-controlled town of Al-Qamishli, doesn’t accept that criticism. She says that most of her neighbors weren’t Assad supporters; some were pro-rebellion, while others stayed neutral. Even so, that didn’t stop jihadists harassing Christians and preying on the women. “We left because I was afraid for the girls—I didn’t want any bad things to happen to them. I was worried the girls would be raped. I kept them inside.”

Her eldest daughter, Dima, aged 22, stayed for much of the war in Aleppo, where she tried to continue with her English studies at the university. But she says it got more dangerous there and not just because of the battles between Assad forces and the rebels over Syria’s onetime commercial hub. She left Aleppo a year ago to join her family at home after one of her friends was kidnapped, gang-raped and then killed. “We don’t know who did this or why,” says Dima. Some rapes and killings of Christians are opportunistic, she says, while others are clearly targeted by jihadist and Islamists. (She adds that Muslim girls are also at risk.)

A pretty girl with brunette hair, Dima sits curled up in an apartment in Midyat with her mother and her 16-year-old sister, Marie. Her father and two siblings are in a camp in Germany after the family got separated. The apartment is unheated and Dima seems to have the weight of the world on her shoulders—she’s the only one working as her mother is sick and her sister doesn’t understand either Kurdish or Turkish and can’t find work.

Dima’s isn’t the only all-female household of Christian refugees in Midyat. Oarda Saliba, aged 40, has with her five daughters ranging from five years old to 20. A son and husband are also in Germany. “For Christians it is very difficult to stay in Syria and there are many bad things happening to women,” she says.“ For jihadists Christian women are seen as their right. I didn’t want to take the risk with my daughters. In the streets they would touch and harass them. I don’t know if they were al-Nusra or not, although some were Libyans and Tunisian. But either way, they were terrorists.” Saudi Arabia financing Army of Islam in Syria
The formation that interests Riyadh is the "Army of Islam", created late in September on the basis of 43 Syrian groups. According to some assessments, it will number from 5,000 to 50,000 soldiers. It is expected that they will be provided with the best weapons including Portable Anti-Aircraft Rocket Systems and antitank guided missiles. Christians hold demo in Damascus
Christians in Damascus have held a demonstration to call for the release of relatives from the ‘hands of the armed groups.’
Comments
×