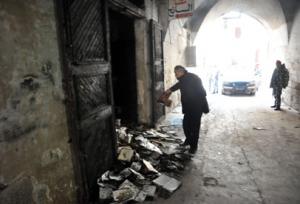 A decades-old library owned by a Greek Orthodox priest in north Lebanon's majority Sunni city of Tripoli was torched late Friday, a day after a sectarian scuffle, a security source said.

"Unknown assailants torched the Saeh Library in Tripoli, destroying two thirds of some 80,000 books and manuscripts housed there," said the source, who spoke on condition of anonymity.

Civil defence teams were deployed to put out the fire, "but there are fears that more books were damaged by the water used to try and put out the flames," he added.

The attack came a day after "a pamphlet was discovered inside one of the books at the library that was insulting to Islam and the prophet Mohammad," said the source.

"After that, the library owner, Father Ibrahim Surouj, met with Islamic leaders in Tripoli. It became clear the priest had nothing to do with the pamphlet, and a demonstration that had been planned in protest over the incident was called off," said the source.

"Then on Friday night, the library was torched," he added.

The library is located in the historic heart of Tripoli, Lebanon's second city and scene of frequent Syria-related violence pitting Sunnis against members of the minority Alawite community, to which Syria's President Bashar al-Assad belongs.

Sectarian violence involving the city's Christians has been extremely rare in recent years.

But Friday's incident comes amid a backdrop of growing religious radicalism in Lebanon related to the war in neighbouring Syria. In the capital of Crete, churches vandalized and icons burned
Cases of vandalism in churches of Heraklion and graffiti in Arabic left by criminals, which have become more frequent, are causing the authorities and the Archdiocese of Crete serious concern.
×