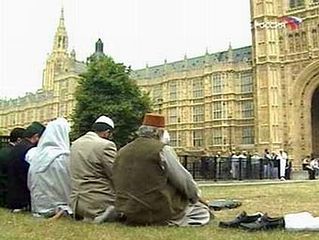 Islam is rapidly forcing out Christianity in the UK, reports Sedmitza.ru. As Christian churches in the United Kingdom are quickly losing parishioners, the Muslim community is growing with unprecedented speed. And though the society sometimes sees a threat in Islam, British Muslims lay claim to an active role in the country's life.

Analysis of results of the population census has shown that Islam may become the dominant religion in the country as early as in ten years. Over the last decade the number of British Muslims has doubled, and the name "Muhammad" has become the most popular name in London.

The average age of a British Muslim is about 26 years old. The Muslim population in the UK is extremely young; it is full of energy, life and dynamics. Great Britain is an innovator in many areas. It will become the first non-Muslim country to introduce financial bonds, available for purchase by Muslim investors.

The English Law Society has recently issued a manual on will making according to sharia laws since there is a great demand for such documents. A new analysis of the latest census, carried out by the Office for National Statistics (ONS), has shown that the Church of England is losing its importance half as fast again as it was supposed earlier. Increase of the average age of parishioners means that the official religion of Great Britain has lost over four million of its followers since 2001.

"The decline that churches in Great Britain have been experiencing for a long time, has now apparently reached its critical point. 95% of the people do not go to the church on Sundays. Christian services are attended by a minority of the population," comments the chief executive of the British Humanist Association Andrew Copson. These figures have prompted the British prime-minister David Cameron to attempt to support the fundamentals of the Church of England institution. He has called upon Christians to be more ardent in preaching their faith and noted "the healing power of the Church". There is a tradition among Christian communities all over Great Britain to perform a "Passion Play" on Great Friday before Easter.

This once again proves that even individuals invested with power are not always aware of what Christians all over the world in fact celebrate. In Yemen a woman is sentenced to psychiatric treatment for conversion from Islam to Christianity
A formerly Muslim woman who embraced Christianity has been sentenced by the Yemeni court to compulsory confinement and medication in the psychiatric hospital of the town of Al Hadidah. Author’s Theory on What Causes Violence in Islamic Cultures
Author and journalist William Tucker believes that polygamy is a dangerous social structure at the center of violence and strife in contemporary Islamic cultures — one of the many themes he covers in his new book “Marriage and Civilization: How Monogamy Made Us Human.” Supreme court of Greece delivers a judgment referring to sharia law
This precedent may affect the whole traditional judicial practice in Greece and, thus, relatives of Muslims will probably be able to dispute the official order of distribution of fortunes.
Comments

I do not want to pour water over your enthusiasm, but any increase in the size of Elim and Assembly of God congregations, are as nothing compared to the increase in the Islamic community. My Grand daughter goes to a Charismatic church where we live and it has grown from a handful to about 40 worshipers each week. A new mosque opens up nearly every month cause they cant keep up.

Dale Jones4/29/2014 12:31 am
I do not totally agree with this article. Because although the official Church of England or the Catholic Church may be declining. The Pentecostal movement of Elim and Assembly of God are on the increase and you can see The Holy Spirit moving as miraculous things are happening as our church spreads into and across the community.
×