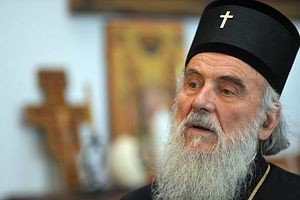 “Unrest and violence rule in Kosovo-Metohija. For decades and centuries, they have been robbing us of that province, of the historical Old Serbia,” said Patriarch Irinej in the epistle read at the Patriarchate, which he addressed on behalf of all bishops of the Serbian Orthodox Church.

“To our brothers and sisters in Kosovo-Metohija we say: be aware that you are not alone and forgotten, the entire Serbian nation and the justice-loving people of the world are with you,” Patriarch Irinej said, calling on the Serbs in KiM to live in peace, harmony and love, both with each other and everyone else.

The Patriarch also touched on the position of Serbs in former Yugoslav republics, noting that the exile of the Cyrillic script is “used as a cover to continue the exile of Serbs from Croatia, to intimidate them and prevent them from coming back”.

Patriarch Irinej appealed to the Macedonian authorities to immediately release Archbishop Jovan, head of the Ohrid Archdiocese of the Serbian Orthodox Church, who is “unjustly held captive, and his flock is denied the freedom of faith and conscience”. He also urged the international community to prevent further discrimination.

Patriarch Irinej also protested over incessant “attacks of the regime in power in Montenegro on the identity, status and freedom of the Serbian Orthodox Church, and attempts to interfere with its internal affairs and canonical structure”.

In his epistle, Patriarch wonders why the ideologists of independent Montenegrin Orthodox Church do not require a similar thing from the Roman Catholic Church as well, and ask it to move its seat from Vatican to Montenegro. 21st Century. A Story of Kosovo.
This film was shot clandestinely in Kosovo. It tells the story of six elderly Serbian women who chose to remain in Kosovo—to live, to pray, and to make their silent appeal to the world.
×