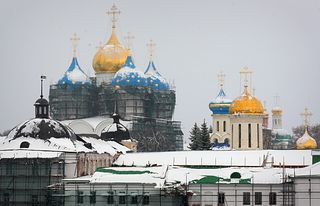 In July this year, near the walls of Holy Trinity-St. Sergius Lavra in the Moscow region, a tent camp measuring 44 hectares will be built; it will accommodate 100,000 participants of the All-Russian Cross procession, dedicated to the 700th birth anniversary of St. Sergius of Radonezh, reports ITAR-TASS.

This was reported on January 9 by the vice-chairman of the Moscow region government Sergei Perov at the meeting in the Sergiyev Posad administration, devoted to the oncoming celebrations.

"The Cross procession will begin near the walls of the Varnitsky Stavropegic Monastery (of the Holy Trinity and St. Sergius) in the Yaroslavl region, and on July 15-17 it will proceed to the territory of the Moscow region. About 100,000 people are expected to take part in this event," he said.

"A tent camp for pilgrims with the total area of 44 hectares is to be set up on the territory, adjacent to Holy Trinity and St. Sergius Lavra... The leader of 700th anniversary celebrations workgroup of the President of the Russian Federation, the plenipotentiary representative of Vladimir Putin in the Central federal district Alexander Beglov will hold a special meeting on this issue late in January," said Perov.

According to the Moscow region government's vice-chairman, a huge park and ride will be arranged near the Lavra as well. Procession of the cross in honor of St. Tikhon of Zadonsk begins
Several hundreds of residents from Lipetsk, a town in central-south Russia, have set out as part of the cross procession in honor of Holy Hierarch Tikhon, Bishop of Voronezh and Zadonsk, Wonder-Worker of All Russia. Unique cross procession by sea started in Sevastopol
The international procession of the cross with visits to the Crimean Churches of Holy Right-Believing Prince Alexander Nevsky is being held as part of the “Alexander Nevsky – the name of Russia” program, carried out with the blessing of His Holiness Patriarch Kirill of Moscow and All Russia. Procession of the Cross with the Icon “Look with Favor at Humility” Takes Place in the Remotest District of Kolyma
The icon, miraculously reflected on the glass at the Monastery of the Presentation (Entry) of the Holy Virgin in Kiev on the 90th anniversary since the canonization of St. Seraphim of Sarov (to whom the church in Evensk is dedicated), has amazingly connected residents of the remotest district of Magadan Region with the long-suffering Ukrainian land.