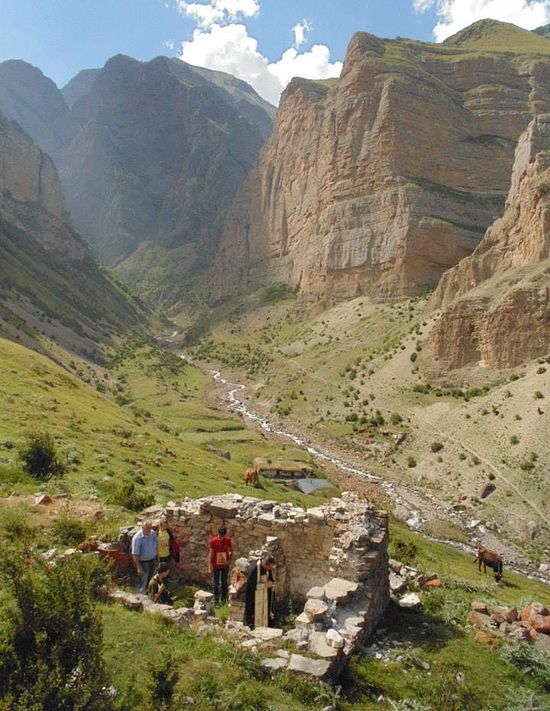 “The Lord granted the Caucasus some of the most beautiful mountains in the world. Mountain forests and deep gorges adorn our blessed land. The light of Orthodoxy was brought here more than 1000 years ago,” reports the Blagoslovenny Kavkaz portal. “And regardless of how difficult the history of the Caucasus may be, Orthodox people have always been and still remain among the most important makers of its history. This is indicated by the remains of ancient Christian churches in very remote mountain areas far from big cities. 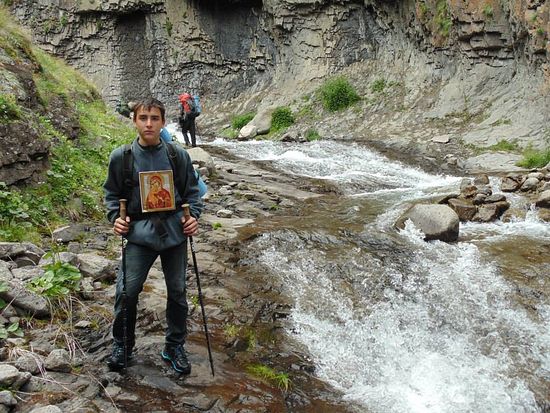 Orthodox people from Tyrnyauz, headed by Rector of St. George’s Church Hieromonk Igor (Vasiliev), arranged a cross procession to one of such places. The guide was Evgeny Kruten who has rich experience of walking tours in the Caucasus Mountains. 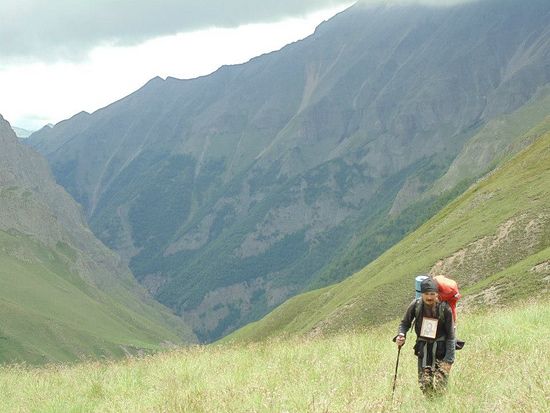 They have forsaken the hustle and bustle of the world for the divine beauty of creation as it was before the Fall in order to serve God and take pleasure in the fragrant mountain grass and flowers, in order to feel the support of a friendly shoulder and be at one with the austere beauty of unspoiled, wild nature. And first of all, they came to pray to the Creator for peace in the world and for reconciliation of the hostilities. 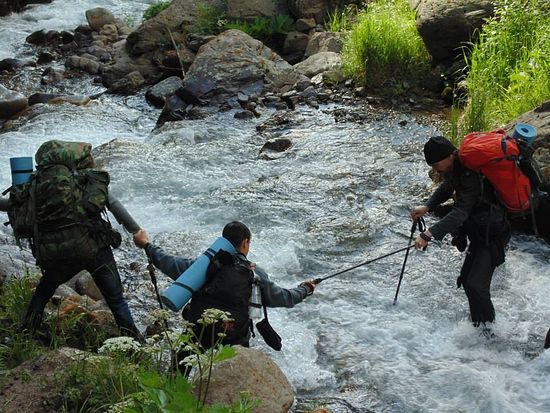 The cross procession started with a prayer service at St. George’s Church of Tyrnyauz and continued among the ruins of the ancient Orthodox church in the village of Eltyubyu in the Chegemsk district, where a Divine Liturgy already had been served last year. 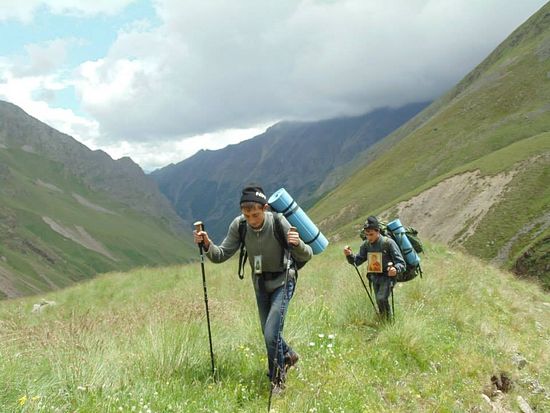 Then the expedition route ran up the gorge of the River Jilga-su (this place-name probably has a Mongolian and not Turkic origin), towards the Caucasian peaks that prop up the sky, and towards the huge crater mouth of the extinct Kum-Tyube volcano. Dozens of times wading the small stormy river and surmounting gorges and canyons, using a climber’s rope, the cross procession participants moved forward. 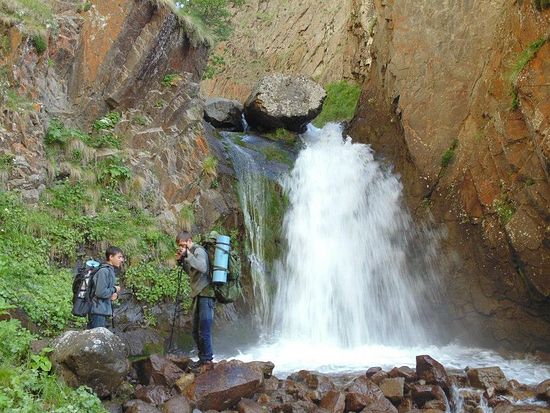 In these difficult conditions, 15-year-old Igor, a permanent participant of cross processions and Orthodox expeditions of Elbrus region, did justice to himself. 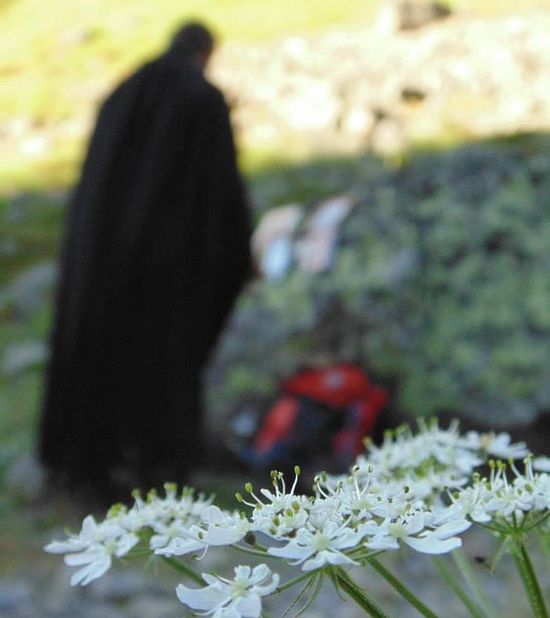 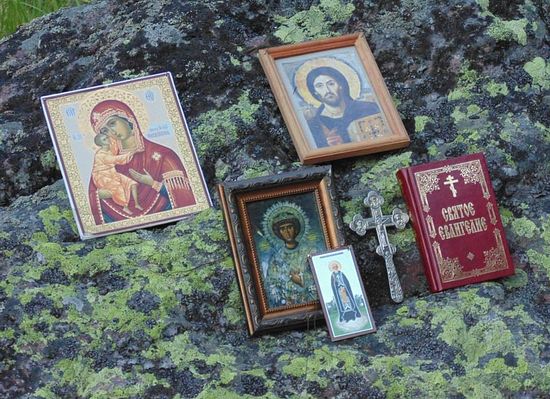 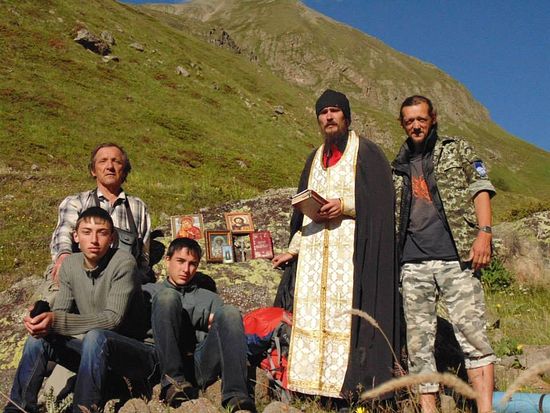 On the third day, on the upper streams of the Jilga-su gorge, on a beautiful glade in bloom a supplicatory prayer service was performed with reading of an Akathist to St. Sergius, Abbot of Radonezh, in order to thank God for all His good deeds, for the beauty He created, to praise the Most Holy Theotokos and to ask the Abbot of the Russian lands (that is, St. Sergius) for his special intercession: for peace and accord in our land, for cessation of fratricidal war and bloodshed.

The expedition was held as part of the St. Sergius’ diocesan cross procession dedicated to the 700th anniversary since birth of St. Sergius of Radonezh (1314-1392). Camp for pilgrims expected at the 700th anniversary service of St. Sergius to be built near Moscow
In July this year, near the walls of Holy Trinity-St. Sergius Lavra in the Moscow region, a tent camp measuring 44 hectares will be built; it will accommodate 100,000 participants of the All-Russian Cross procession, dedicated to the 700th birth anniversary of St. Sergius of Radonezh.
Comments
×