Epiphany: The Celebration of Life

How shall I describe this great mystery ?
For the Incorporal hath become incarnate;
the Word took unto himself the density of flesh.
The Unseen is seen, the Untouchable is touched,
the Beginningless beginneth, and the Son of God
becomes the Son of Man; yes Jesus Christ, himself
who is the same yesterday, today and unto all ages.

When Thou, O Lord, was baptized in the Jordan,
The Worship of the Trinity was made manifest.
For the Voice of the Father bore witness unto Thee,
calling Thee the Beloved Son,
And the Spirit in the Form of a Dove
confirmed His word as sure and steadfast.
O Christ our God, who has appeared and enlightened the world,
Glory to Thee. 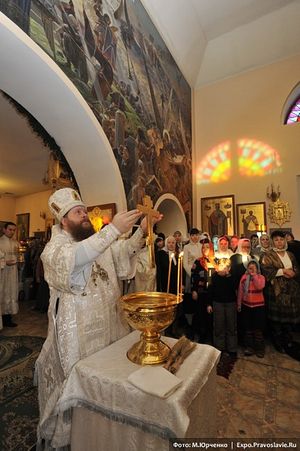 Photo: M. Yurchenko / Expo.Pravoslavie.Ru
These two Orthodox hymns differ quite radically from the popular carols "Silent Night" and "We Three Kings," that we heard during this past season. The Orthodox hymns represent a proclamation of the central mystery of the Incarnation in an unique semitic and poetic form, according to the Eastern traditions.

For Orthodoxy, the Feasts of the Nativity and Epiphany are a part of the same rhythm. In fact, they belong together in the same cycle and form one liturgical unit.

The Magi are already mentioned at Christmas Liturgy. And Epiphany speaks about the manifestation of God. In the East, Theophany or Epiphany is in reality the Celebration of the coming of God to meet man in the texture of human history.

It is also called the Feast of Lights. Epiphany already has paschal implications.

I am reminded that it is in the West that we can recover our common Christian heritage; and at the same time speak about the richness of the Orthodox tradition that has so much relevancy for contemporary society.

The historian Toynbee lamented the ecological damage done to the environment by the Christians who have heeded the Biblical injunction, "to subdue the earth." What Toynbee misunderstood was not that Christianity itself was to blame - but rather a Christianity severed from its roots and seduced by secularism.

Primitive man's perception of nature's divinity was not annihilated by monotheism or Christianity's vision of the Holy Trinity. In fact, the reverse is true. Nature is restored to its pristine beauty as we announce the Saving Deeds of God. Salvation is a cosmological happening.

The upheavals caused by technological misadventures and the subsequent human alienations are quite simply not Christianity's mea culpa. A critical detour in the history of Christianity however has been taken by certain dualistic philosophical trends.

What has occurred in my opinion, is that Western man in particular; and society in general, have lost their reverence for life. A transformation has gradually taken place within this world of ours that has swept away any semblance of a real consciousness or awareness that the created order still somehow belongs to God. Ideally, we were once taught that we are consecrated stewards of His gifts to us. However, this insight has been unfortunately misappropriated.

Of course some will very definitely disagree with me. They will think of their gardens, fishing trips, country retreats and excursions into nature and say, "I behold the beauty of God's creation and appreciate its splendor."

This may be true for a few. I dare say, for most, the World/Nature/this cosmos, is but like a passing scene in the theatre of life. We're just too preoccupied to notice. . . And we have abrogated our responsibility to change things when they go amiss.

The Church of the East employs the symbols of life in her liturgical life such as water at Epiphany to constantly reaffirm the evangelical insight that all of creation is transfigured by God, in God and for God.

Epiphany helps to reaffirm our baptismal vows that we are kings and priests over God's creation. "Bless the Lord, O my Soul; Bless His Holy Name. . ." It is in our "use" of the stuff of this world that fulfills for us the ultimate destiny of creation.

It is all summed up in the following perspective: Is our starting point God or man?, a Christian humanism or secular humanism. . .? 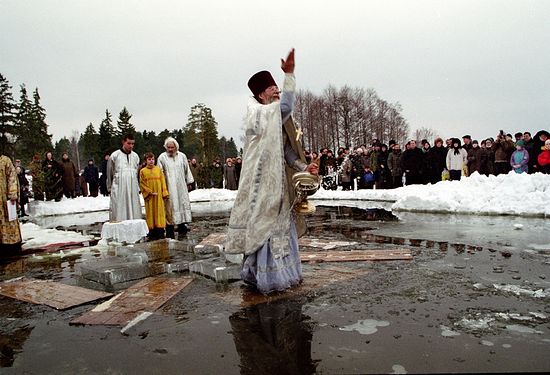 As students of theology, I am quite sure that I do not have to tell you about all the signs and symbols behind the use of water. Maybe the difference between the Eastern and Western liturgical tradition is that the Byzantines use "matter" so freely and easily. The Orthodox are quite comfortable among icons and incense; in fact, all the senses of the worshipper are "assaulted" by colors, sounds, smells, etc. The whole man is "graped" in the liturgy of the Church.

This particular feast is a revelation of the Trinity; so too, the feasts of Transfiguration and Pentecost are prefigured: God acting in Christ by the power of the Holy Spirit. An eschatological event! The Kingdom is being announced. . . the Parousia inaugurated.

His love is poured out in Creation and Creation responds by lifting itself to Him, the Source and Ground of all Being. The intervention of God, like a massive earthquake shakes us out of our religious, moral and stupor; there is a call to action. Dare mankind place itself in jeopardy by standing alone on the edge of the abyss of apathy?

The task of theology today I believe is to "quicken" the convergence of Traditions; to recover its lost Catholicity; its wholeness in which man fulfills the Biblical injunction by offering himself, the stuff of this world, as its Priest and King. Our "hosanna" to God must ultimately be the restoration of faith, of ultimate values as we stand face to face to a hostile world. Whether we admit it or not, Christianity is in a similar position as the first Christian era.

We are not and must not be slaves to the machinery of this age or succumb to a minority status. Man is called always to the realization of his mission to transform the world by lovingly offering it in Holy Service to the Divine Master.

Epiphany reminds us, makes present for us, the process of the Sanctification of Life. Yes all of it. You and me! And all of our structures and institutions. It begins with the person and extends outwards. For, God became man, so man can become God, said one Alexandrian; and another,

"My book is the whole visible creation, and it lies open before me whenever I wish to read in it the words of God." Economics, the Environment and the Orthodox Church’s Eucharistic Vision
Rev. Gregory Jensen
As he has done in the past, Ecumenical Patriarch Bartholomew in his encyclical for the beginning of the Orthodox Christian ecclesiastical year (September 1) meditates on “the ongoing and daily destruction of the natural environment.” Environmental damage is the poisoned fruit of “human greed” and the pursuit of “vain profit,” the patriarch writes. The Baptism of Our Lord
Archpriest A. Narushevich

The Baptism of Our Lord
Archpriest A. Narushevich
Pride was the source of the sin of our forefathers, for they desired to become like their Creator, “like God, knowing good and evil” (Gen. 3:5). Our Lord Jesus Christ, accepting baptism from His creature, shows an example of great humility. Feast of the Holy Theophany of our Lord God and Savior Jesus Christ
Christ’s baptism in the Jordan was “theophany,” a manifestation of God to the world, because it was the beginning of our Lord’s public ministry. It was also a “theophany” in that the world was granted a revelation of the Holy Trinity. All three Persons were made manifest together: the Father testified from on high to the divine Sonship of Jesus; the Son received His Father’s testimony; and the Spirit was seen in the form of a dove, descending from the Father and resting upon the Son.
Comments
×