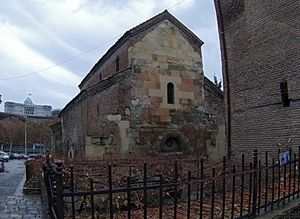 The Anchiskhati Basilica of St Mary is the oldest surviving church in Tbilisi, Georgia.
Georgia has announced plans to extend 4.5 million lari (upwards of $2.5 million) to four religious minorities to compensate for the repression of their religious rights under Soviet rule. The payment, planned as a one-time disbursement, will mark the first time that religions or Christian denominations other than the dominant Georgian Orthodox Church have received state financing and, to some, suggests a step toward shaking up the country's religious pecking order.

The 4.5 million lari will be divided “proportionally” between the Roman Catholic Church, the Armenian Apostolic Church and Muslim and Jewish groups, elaborated State Minister for Reconciliation and Civil Equality Paata Zakareishvili. The government is still working on a concrete formula for the handout, he added.

“The Georgian government has long been compensating the damages to the Georgian Patriarchy and the Orthodox Church, but there were other religious groups that suffered no less,” Zakareishvili said.

The Patriarchy, one of Georgia's key power centers, has welcomed the planned payments, saying that the initiative shows a desire to restore justice.

Zakareishvili claims that the payments will apply to 90 percent of Georgia’s religious faithful, but other religious minorities have expressed disappointment for not being included in the arrangement.

Overall, religious minorities and rights groups have long complained of discrimination in favor of the Georgian Orthodox Church, Georgia's dominant religious institution, which receives state financing under a 2002 agreement with the government. The government often has taken flak from human-rights groups for failing to ensure that other religious groups have the same opportunities for the expression of their faiths.

With that, no doubt, in mind, Prime Minister Gharibashvili used his January 27 announcement about the payments to religious minorities as an opportunity to correct the critics. The funding serves as "proof" that “We equally respect different religions," he said on January 27. Patriarch Ilia II asking Turkish authorities to resume services at Georgian churches
On Friday, September 12, Catholicos-Patriarch Ilia II of All Georgia received at the Patriarchate in Tbilisi the head of the Presidency for Religious Affairs in Turkey Mehmet G&#246;rmez and asked him to afford an opportunity to perform services at Georgian churches on the territory of Turkey, reports Gruzia Online. To Legalize Lawlessness is a Great Sin!
Andrew (Gvazava), Metropolitan of Gori and Ateni, John (Gamrekeli), Metropolitan of Rustavi and Marneuli, Mariam Gagua
Hierarchs continue to speak out about the Antidiscrimination Law in their addresses to the flock, and priests in their sermons; public figures in Georgia publish articles in the press… This law is discussed in the private conversations of ordinary citizens. All this testifies to the fact that Georgian society will not accept the Antidiscrimination Law and this topic remains very pressing to this day. Poll shows population of Georgia most confident in the Church
According to the Imedi television company, the research carried out by the International Republican Institute (IRI), showed that the Georgian Orthodox Church enjoyed the highest level of confidence among state, political and public institutions in Georgia: 94% of respondents trust it.