To Seek that which was Lost: A Sermon on Zacchaeus Sunday 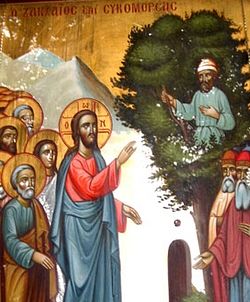 Zacchaeus Sunday signfies the approach of Great Lent. So, it's coming. We heard today from the Gospel of St. Luke the story of Zacchaeus—the little, short guy. He was so short he couldn't see above peoples’ heads. He lived in Jericho, and when he heard that Jesus was coming through the town, he decided he needed to see Him. But why did he all of the sudden decide he needed to see Him? That's the real question.

You see, Zacchaeus was a publican, he was a tax collector. Moreover, he wasn't just a tax collector—he was chief of the tax collectors! It meant that no matter who collected taxes, Zacchaeus got a portion of what they collected. And as things go in the world, they always collected more taxes than they were supposed to collect. The love of money creates in men the desire to do whatever is neccesary to get more. Zacchaeus was not exempt from that. But at the name of Jesus, when he heard that He was coming, something clicked inside of Zacchaeus. Something clicked, which would induce this chief of the publicans to make a fool of himself by climbing into a tree—a man who, though looked upon by other Jews as a criminal and unclean, nevertheless had a social status in the city. Because of his money and status, he was an important person.

He himself would climb into a sycamore-fig tree to get a glimpise of this man called Jesus. So something was already happening in Zacchaeus' heart. You notice in the Gospel that Zacchaeus was looking for Christ, but it was Christ who saw him first! He caused this to happen in Zacchaeus' heart; and Zacchaeus would even make a fool of himself to see Him.

So, Jesus comes, looks up, and says "Zacchaeus! Come down, for tonight I'm going to dine in your house." Jesus has never met this man before, much less could he have known his name, as far as Zaccheus was aware. Can you imagine Zacchaeus' shock? So, he stumbles down, and he races to his house to get all the servants going and everything prepared for this frantic welcome of the man he's been anticipating. But something is happening in his heart as this is going on.

As the other "righteous people" of Jericho see that Jesus is going to the house of Zacchaeus—a sinner, a tax collector, they begin murmuring and grumbling. "This surely can't be the Messiah. If he were the Messiah he defintely wouldn't go into this man's house. He can't be anyone important, he must be a sinner like them." Christ doesn't say anything to them. We see this same silence from Christ as Pilate asks Him, "What is Truth?" and again at His trial. Here, He just goes and has dinner with Zacchaeus.

They are still grumbling while Christ has dinner with them, when all of a sudden Zacchaeus stands up and says, in so many words, "I repent!" How does he repent? “Behold, Lord, the half of my goods I give to the poor; and if I have taken any thing from any man by false accusation, I restore him fourfold.” The law only required him to restore one and a fifth more. But Zacchaeus says he's going to restore four times the amount. And then Jesus says, "Truly you are a son of Abraham. Today salvation has come to this house. For the Son of man is come to seek and to save that which was lost." Zacchaeus' heart was filled with so much joy for the Lord that he changed his life drastically. Can you imagine going from having everything as a rich man to giving it all away in one day?

Church Tradition says that Zacchaeus followed the Apostle Peter. Peter ordained him Bishop of Caesarea; he was Bishop of Caesarea until a ripe old age and died peacefully. So an encounter with Christ changes us. It can lead us to repetence as it did to Zacchaeus. But the other thing that an encounter with Christ can do, if we are not open to repetence, is to harden our hearts. The grumblers and complainers walked away saying, "Well, he ate in the house of a sinner. I don't care what Zacchaeus said or did. I won't believe it." They were lost. We find in our own lives—even though we be baptized Orthodox Christians—that God reveals more and more in our hearts of what we actually are. And we begin to see ourselves as really, truly, sinners. Not just imagine it, not just say it with words, but to actually see ourselves as being very far from God, very far from the mark of that to which Christ has called us in our baptism. Christ said He came to seek and to save that which is lost.

Thus, the time before Great Lent is a time for repetence. As we go through these Sundays of prepartion for Great Lent and enter Great Lent, we start building a sense of forgiveness in our hearts for other people—for people we don't even know, for people we will encounter this coming week and the weeks to come, strangers, drivers who irritate us on the highway, co-workers, and all the other people that God has put before us to give us a test—to see if we can truly love like He does. Because that is what we are supposed to be: imitators of Christ. May God give us the wisdom and strength to be so.

The blessing of the Lord be upon you through His grace and love for mankind, always, now and ever, and unto the ages of ages! Amen. Sunday of Zacchaeus
Who was Zacchaeus? He was a leader of the publicans—"the chief among publicans." The customary comparison between the humble publican and the proud Pharisee often blocks the true meaning of these two images in our minds. However, to understand the Gospel correctly, one must picture them clearly. The Pharisees were truly righteous men. If on our lips the name "Pharisee" sounds as condemnation, in the days of Christ and during the first decades of Christianity this was not so. On the contrary, the Apostle Paul triumphantly confesses before the Jews, "I am a Pharisee, the son of a Pharisee" Sermon on the Gospel of the Sunday of Zacchaeus
Fr. Panagiotes Carras

Sermon on the Gospel of the Sunday of Zacchaeus
Fr. Panagiotes Carras
Who knows what was going on in his heart. Maybe he had reached a point in his life where all of a sudden he had become tired of exploiting people, tired of taking advantage of them, tired of listening to poor women cry as he took their money or food. Because this was what he had done. He went into people's homes and took their flour, oil, or whatever else they had. Many times he literally took food out of the mouths of children who were fatherless. Zacchaeus Of Little Stature
St. Nikolai Velimirovich
"Today, salvation has come to this house" said the Lord upon entering the house of Zacchaeus the sinner. Christ was the salvation that came and Zacchaeus was the house into which He entered. Brethren, each one of us is a house in which sin dwells as long as Christ is distant and to which salvation comes when Christ approaches it.
Comments
×