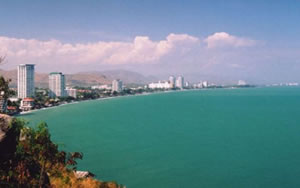 Head of Moscow Patriarchate Secretariat for Foreign Institutions Archbishop Mark of Yegoryevsk has laid a foundation stone for a church in honor of the holy royal martyrs in the city of Hua Hin, Thailand.

Currently, there is an almost 300-strong Russian community in Hua Hin. About a year ago its representatives asked Archimandrite Oleg (Cherepanin) to build a church in the town because the nearest church where they could pray was in a Ratchaburi monastery and not everyone could travel there. Funds were raised and a small land plot was bought.

The hierarch also performed a prayer service at the Trinity Church on the island of Phuket and consecrated a new belfry. He also visited the Samui Island where he performed the rite of great consecration of the Ascension Day Church and a liturgy, Moscow Patriarchate said on its website.

Currently, there are active Christian Orthodox churches in Bangkok, Pattaya and on the islands of Phuket and Samui in Thailand. During his trip, which will last until February 17, Archbishop Mark will lay the foundation stone for new churches on the Thai island of Ko Chang, as well as in Sihanoukville and Siem Reap in Cambodia. Orthodox Clergy in Thailand to start learning Thai
Archimandrite Oleg (Cherepanin), the representative of the Russian Orthodox Church (the Patriarchate of Moscow) in the kingdom of Thailand, has signed a direction that urges the Clergy and staffers of all Orthodox parishes in Thailand to complete a course of oral and written Thai for the current year.

The Law of God for Thailand
In January, 2012, an almost three-year-long effort came to a successful conclusion. Protopriest Seraphim Slobodskoy’s The Law of God was translated into the Thai language. This was done by Priest Danai (Daniel) Vanna, the first Thai Orthodox priest, a graduate of St Petersburg Theological Seminary; Mrs Naparta Aphichataphong, former official translator of English for the Parliament of Thailand, now studying at SPTS; and Mr Yingsak Samsen, a specialist in the Russian language.
×