Tourists Must Leave Egypt By Feb. 20 or Face Attack: Militants 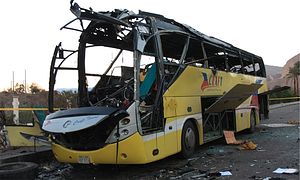 A militant Islamist group has warned tourists to leave Egypt and threatened to attack any who stay in the country after February 20, raising the prospect of a new front in a fast-growing insurgency.

The Sinai-based Ansar Bayt al-Maqdis group, which claimed responsibility for a suicide bombing that killed two South Korean tourists and an Egyptian on Sunday, made the statement on an affiliated Twitter account.

"We recommend tourists to get out safely before the expiry of the deadline," read the tweet, written in English.

Ansar Bayt al-Maqdis has said in the past that it does not post statements on social media sites but statements that appeared on the Twitter account in the past have afterwards surfaced on jihadi websites the group does say it uses.

Islamist militants have killed hundreds of policemen and soldiers since the army deposed Islamist president Mohamed Mursi in July, but Sunday's attack on a tourist bus marks a strategic shift to soft targets that could devastate an economy already reeling from political turmoil.

"What Ansar Bayt al-Maqdis has announced, threatening to target tourists in the coming period, puts new challenges in front of the Egyptian security apparatus and the state in general," said Interior Ministry spokesman Hany Abdel Latif.

The uprising that toppled Hosni Mubarak in 2011 scared off many tourists, dealing a major blow to an industry that was a major employer and accounted for more than 10 percent of gross domestic product before the anti-Mubarak revolt.

Visitors are down to a trickle since army chief Abdel Fattah al-Sisi deposed Mursi, triggering a bloody political crisis.

"This is not only reflected in the attack on the tourist bus in Taba last weekend, but also in the series of bombings in the Nile Valley and Nile Delta regions."

In one of the boldest attacks claimed by Ansar, a car bomb killed 16 people at security headquarters in the city of Mansoura on December 24. The attack was claimed on the same Twitter account before jihadi sites carried the official statement.

The group has extended its reach beyond the Sinai to cities including Cairo, where they claimed responsibility for an assassination attempt on the interior minister.

"This statement, if genuine, would add tourism quite explicitly to the target set already outlined by Ansar, which includes security forces and economic interests of the state and the army," said Anna Boyd, an analyst at London-based IHS Jane's.

An army source told Reuters that the latest militant attacks were a reaction to a military offensive which was hurting militants. "They are breathing their last breath," he said. The winter of Christian discontent in the Arab world
Too many "well-meaning" individuals and groups have swallowed the fallacious Palestinian Narrative of Victimhood in the Middle East and fail to recognize that the Christians living there are the real victims. But in one MidEast country Christians thrive
Comments
×