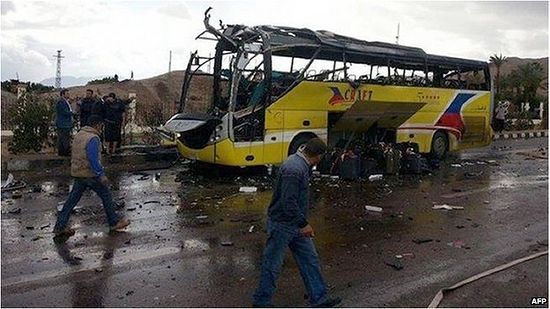 Islamist militant group Ansar Beit al-Maqdis has said it carried out a deadly bomb attack on a tourist bus in Egypt's Sinai peninsula on Sunday.

The group warned it was part of its "economic war" against the current Egyptian authorities, which it described as "traitors".

Three South Koreans and an Egyptian were killed in the attack.

The Sinai peninsula has become increasingly lawless since President Hosni Mubarak was overthrown in 2011.

Militants further stepped up their attacks after President Mohamed Morsi was ousted by the army last year.

Egypt map
In a statement, Ansar Beit al-Maqdis said one its members carried out the bombing.

"With God's will we will be watching this treacherous gang of infiltrators and we will target their economic interests," it said.

This was the first attack on tourists in nearly a decade, raising fears that the militants have renewed a campaign to wreck the flagging tourism industry.

The bus was reported to be heading into Israel from St Catherine's monastery, a popular tourist destination near Mount Sinai, when it was attacked.

South Korea's foreign ministry said on Monday that the bus was carrying 31 tourists, plus three tour guides - two Korean and one Egyptian.

Those who died were the two South Korean tour guides, a Korean tourist and the Egyptian driver, Yonhap news agency reported, citing the ministry.

Fourteen other South Koreans were taken to hospital.

The passengers were members of a church group on a 12-day tour of religious sites in Turkey, Egypt and Israel, the South Korean news agency said.

The exact cause of the blast is not clear. One report describes a young man throwing a device into the vehicle, another - citing South Korea's ambassador to Egypt - says the man boarded the bus. Kidnapped Christian girl freed by special services of Egypt
The security service of Egypt succeeded in freeing a Christian girl who had been kidnapped by a terrorist group.

Egypt: Fears Replace Christians' High Expectations
There is no sign of the hundreds of thousands of Christian pilgrims who flock here every November. The only noise disturbing the quiet of the Monastery of Mar Girgis these days is the call for prayers blaring from the nearby mosque.