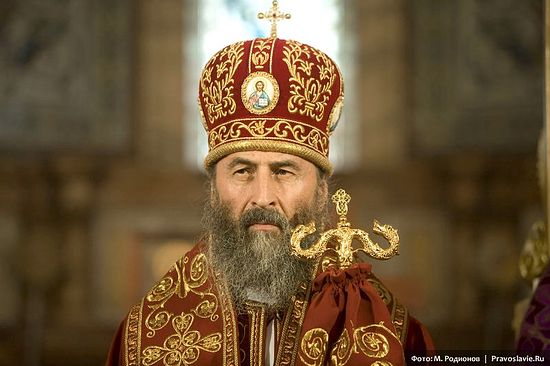 In connection with the medically certified impossibility of His Beatitude Metropolitan Vladimir of Kiev and All the Ukraine to execute his duties as primate of the Ukrainian Orthodox Church, of which the Synod members were convinced after visiting His Beatitude in the hospital, the Synod made a decision to elect the Locum Tenens of the Metropolitanate of Kiev. In accordance with the statutes of the Ukrainian Orthodox Church, by secret vote Metropolitan Onufry of Chernovtsy and Bukovina was elected Locum Tenens.

Following the election, His Holiness Patriarch Kirill of Moscow and All Russia, during a phone conversation wished Metropolitan Onufry help of God in his responsible ministry in this difficult period for the Church, which is now being experienced by the Ukrainian people.

Biography of Metropolitan Onufry of Chernovtsy and Bukovina

A permanent member of the Holy Synod of the Ukrainian Orthodox Church, Metropolitan Onufry of Chernovtsy and Bukovina (Berezovsky Orest Vladimirovich) was born on November 5, 1944, in the village of Korytnoye of the Vashkovtsy district of the Chernovtsy region in the Ukraine, to a priest's family.

In 1964 he graduated from the technical school of Chernovtsy, began work in a construction organization, and in 1966 he entered the technology department of the Chernovtsy State University. In 1969 he left the university and entered the Moscow Theological Seminary.

In 1970 he was accepted into the Holy Trinity St. Sergius Lavra. On March 18, 1971 he took the monastic vows, on June 20 he was ordained hierodeacon, and on May 29, 1972, a hieromonk. In 1980 he became an igumen (a rank of honor among priest-monks). On August 28, 1984, he was appointed Rector of the Transfiguration Church of the Athonite dependency in the village of Lukino, Moscow region. On June 28, 1985, he was appointed Rural Dean of the Holy Trinity St. Sergius Lavra. On December 15, 1986, he was raised to the rank of archimandrite.

In 1988 he graduated from the Moscow Theological Academy as a doctoral candidate in theology. On July 20, 1988, he was appointed Father-Superior of the Dormition Pochayiv Lavra. On December 9, 1990, he was consecrated Bishop of Chernovtsy and Bukovina at the St. Vladimir (Volodimir) Cathedral in Kiev.

On January 22, 1992, he refused to sign an appeal of the hierarchs' meeting of UOC to His Holiness Patriarch Alexy II for granting of autocephaly to the church in the Ukraine; on January 23 he was moved to the Ivano-Frankivsk diocese by then Metropolitan Philaret ([Denisenko] later anathematized by the church for forming an unsanctioned “Ukrainian Patriarch, with himself at the head).

On April 7, 1992, he was restored to the diocese of Chernovtsy. On July 28, 1994, he became archbishop and was appointed a permanent member of the Holy Synod of UOC. On November 22, 2000, he was raised to the rank of Metropolitan. On November 23, 2013, he was awarded the right to wear two panagias (the pectoral icon worn by bishops) by His Beatitude Metropolitan Vladimir of Kiev and All the Ukraine.

On February 24, 2014, at the meeting of the Holy Synod of the Ukrainian Orthodox Church he was elected Locum Tenens of the Metropolitan See of Kiev.