On November 4, 2014, the feast-day of the Kazan Icon of the Mother of God, head of the Ukrainian Orthodox Church of the Moscow Patriarchate (UOC MP), His Beatitude Metropolitan Onufry of Kiev and All the Ukraine arrived at the Russian St. Panteleimon Monastery on Mt. Athos, reports Russky Afon. 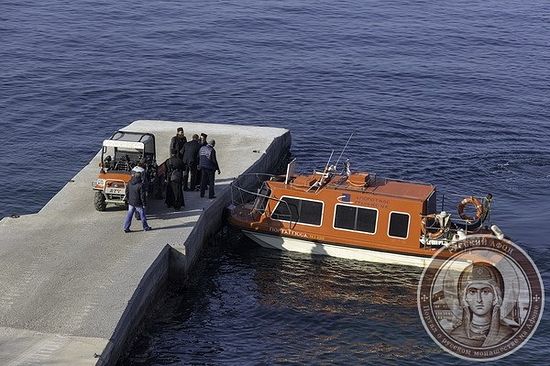 This is the first visit of Metropolitan Onufry to Holy Mount Athos as head of UOC MP. The Russian Athonite monastery received him solemnly, with ringing of church bells, not only as primate, but also as an old benefactor of the monastery. For the past 20 years he was annually come to the Holy Mountain and visited the Russian Athonite monastery, by tradition supporting it and its brethren. 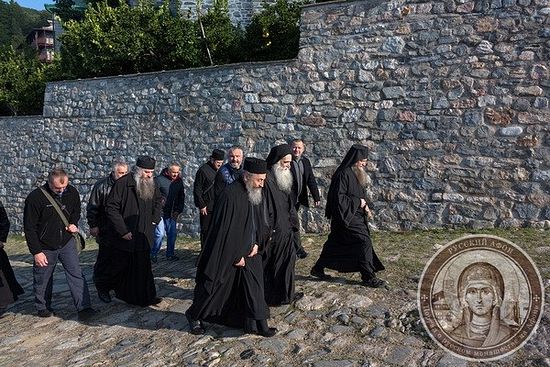 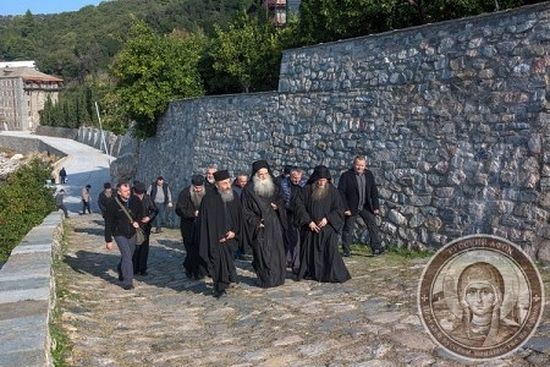 After a solemn welcome at the monastery gate head of the UOC MP proceeded to the monastery’s main Cathedral of Holy Great Martyr Panteleimon and venerated there relics of numerous saints as well as the priceless, Venerable Head of Holy Healer Panteleimon. 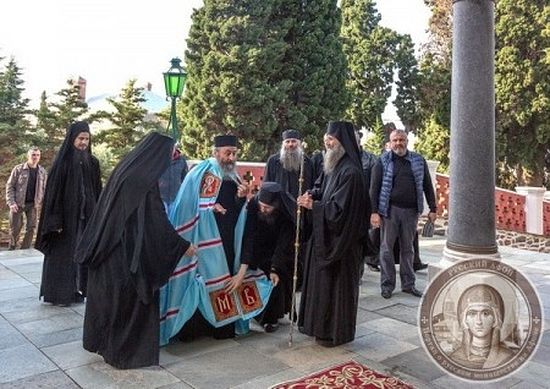 Then, at the cathedral, Metropolitan Onufry greeted Archimandrite Jeremiah (Alekhin), Abbot of the Russian Monastery on Mt. Athos, and conveyed the blessing from His Holiness Patriarch Kirill. The hierarch also asked the Athonite brethren to pray for the suffering Ukrainian people.

His Beatitude greeted Father-Superior Jeremiah on his 99th birthday that he had celebrated on October 9/22, and on behalf of the UOC MP presented him with the order of Holy Apostle Andrew the First-Called.

“We praise God,” His Beatitude Metropolitan Onufry said, while greeting the elder-abbot, “that He granted us, weak as we are, such a spiritual mentor, a living example of monastic piety. With our sincere love we are giving you this earthly award for your monastic and pastoral labors of many years, and may you receive from the Lord the spiritual reward, which is inside ourselves.” 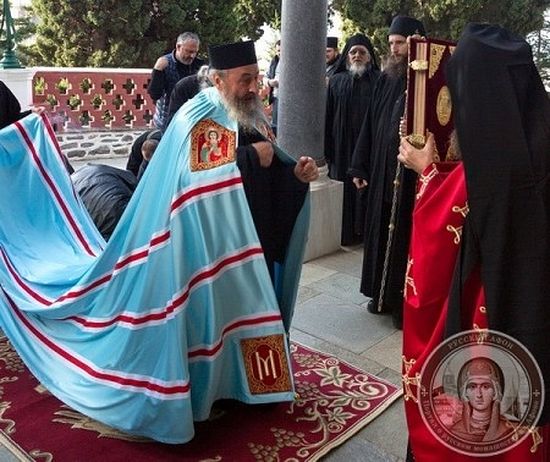 At Compline the same day at the Russian Athonite monastery, the archpastor served an Akathist before the most ancient copy of the Miracle-Working Icon of the Mother of God kept there, offering up special prayers for cessation of the ongoing bloodshed and restoration of peace in the Ukraine. 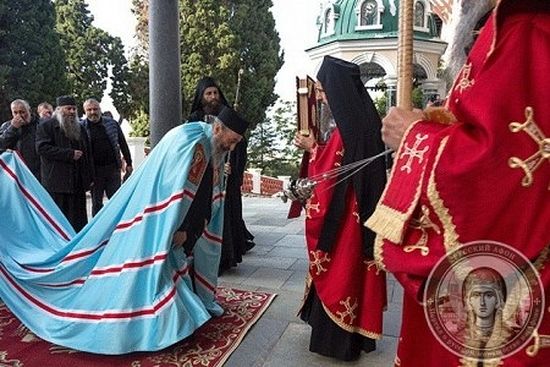 On November 5, on his birthday, His Beatitude Metropolitan Onufry of Kiev and All the Ukraine headed the Divine Liturgy at the St. Panteleimon’s Monastery on Mt. Athos. Thus on the Holy Mountain, by fasting and prayer, head of the UOC MP celebrated his 70th birthday. 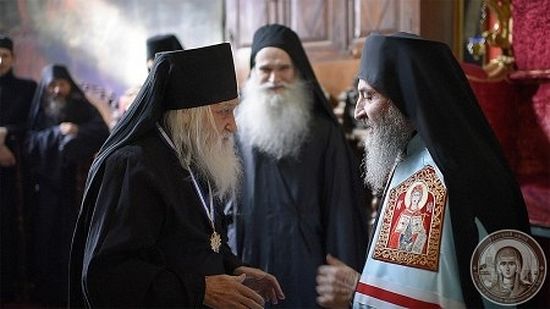 After the service there was a traditional brethren’s meal at the monastery, during which the monks and numerous pilgrims prayerfully greeted His Beatitude on his 70th birthday. 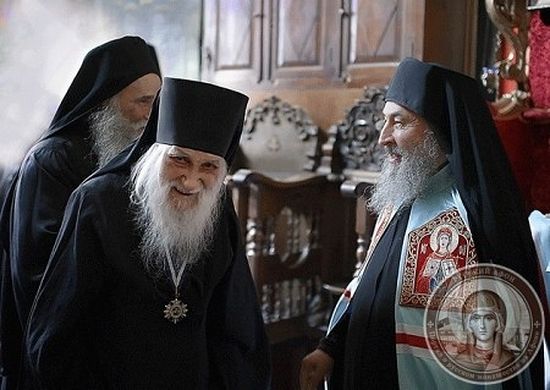 Metropolitan Onufry has timed his visit on Mt. Athos to coincide with October 26/November 8, for the purpose of the traditional participation in the local feast of Holy Righteous Eubula – mother of St. Panteleimon, and Holy Bishop-Martyr Hermolaus – his mentor: he had consecrated the Church in honor of both of them at the Athonite St. Panteleimon’s Monastery in 2003.

As is generally known, Metropolitan Onufry is a frequent guest and a friend of the Russian St. Panteleimon’s Monastery on Mt. Athos. He is also linked with Mt. Athos by the fact that in 1984 he served as Rector of the Holy Transfiguration’s Church of the Athonite Dependency of the St. Panteleimon’s Monastery in Lukino village of the Moscow region. Metropolitan Onuphry asks the Ukrainian president to prevent seizure of monasteries and churches
“We are especially concerned about the fact that on June 22, 2014, a large number of armed people with aggressive behavior gathered near the Kiev Caves Lavra. All this looked like an attempt of seizure of the Lavra,” reads the address of His Eminence.
Comments
×