300th birth anniversary of St. Cosmas of Aetalia, Equal-to-the-Apostles, being celebrated in Greece 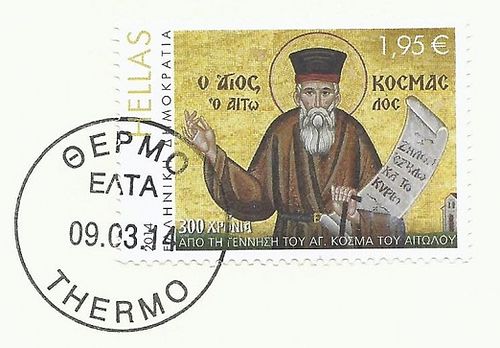 In the year of the 300th anniversary of the birth, and 235th anniversary of the martyrdom of St. Cosmas of Aetalia, Equal-to-the-Apostles, academic conferences, exhibitions, concerts of spiritual music, and other events are taking place in Greece and some other countries.

On March 9 in the Aetolian town of Thermo a new postal stamp was launched. The stamp was issued by "the postal service of Greece" on the occasion of the 300th anniversary of the saint's birth. The hall where the event was held was full, reports AgionOros.Ru.

The mayor of Thermo said, addressing those gathered: "Our region is proud of the fact that St. Cosmas of Aetolia was born, raised, and began his activities here... It cannot be described in words, what great services he performed: St. Cosmas, Equal-to-the-Apostles, saved our people from islamization and the total loss of our identity".

Metropolitan Cosmas of Aetolia stressed: "All of us feel gratitude to the holy man. St. Cosmas restored our motherland spiritually, and saved us from death. He continues to give us ideals and values today. St. Cosmas of Aetolia is bringing the light of Christ to society, families, and young people. His heritage is especially relevant now, when contemporary Greek rulers are acting contrary to his precepts".

The chairman of the "Post of Greece's" public council related why it was decided to commemorate the saint by issuing the postal stamp: "The heritage of Cosmas of Aetolia is still relevant nowadays. He was a genuine patriot who did not lose heart even under pressure from enemies both internal and alien, and thus "laid down his life for his friends" (John 15:13)".

In November and December 2014 an international academic conference dedicated to St. Cosmas of Aetolia will take place in Moscow. All reports will be published by the "Svyataya Gora" ("Holy Mountain") publishing house. Applications for speaking at the conference can be sent to the e-mail address: zoaf@yandex.ru.

Equal of the Apostles Great Prince Vladimir, in Holy Baptism Basil, the Enlightener of the Russian Land Life and Labors of St. Cosmas of Aetolia. Part 2
Athanasius Zoitakis
The contribution of St. Cosmas of Aetolia to the spiritual and national renaissance of the Balkans was not only in his own sermons, which covered practically every level of the population, but also in the foundation of a large number of free schools. "He founded schools everywhere through his teaching," writes St. Nikodimos the Hagiorite. The Life and Labors of St. Cosmas of Aetolia. Part 1
Athanasios Zoetakis

The Life and Labors of St. Cosmas of Aetolia. Part 1
Athanasius Zoitakis
Cosmas was a true Christian—he could not be concerned with his own salvation alone; his pain for his countrymen and love of neighbor caused him to dedicate himself to the service of enlightenment, which would later become the very meaning of life for him. Venerable Zabulon and Sosana, Parents of the Equal-to-the-Apostles Nino (4th century)
Archpriest Zakaria Machitadze
According to Holy Tradition, St. Nino and Great-martyr George were blood relatives. At the same time as St. George’s martyrdom, a certain nobleman, the servant of God Zabulon, arrived in Rome from Cappadocia. Zabulon began to serve in the emperor’s army, and before long he was widely recognized as a courageous cavalryman and a fine soldier.
Comments
×