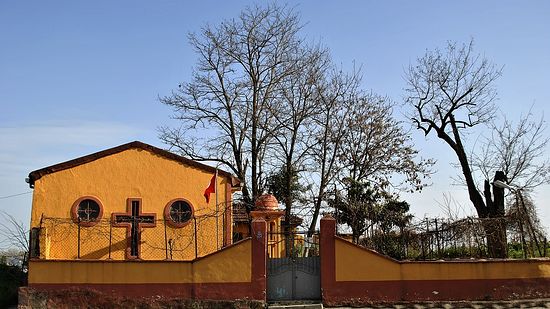 A group of young thugs, apparently from the pro-Kurdish Peoples' Democratic Party (HDP), vandalised an Orthodox Christian church in Istanbul. Although informed of the incident, the police refused to intervene.

The church is famous for its source of water, deemed holy according to Eastern Byzantine tradition.

Church custodian Athanasios Ozkaremihologlu said that a bunch of young men forced their way through the building's front door. After causing mayhem, they took several sacred objects and the bell of the historic church.

Eventually, he sought refuge at a nearby police station. However, the agents on duty at the time refused to intervene, saying that such action would make matters worse.

The regrettable act of vandalism took place a week before next Sunday's local elections, during celebrations marking Nowruz, the Iranian New Year, which falls on the first day of spring, and is widely celebrated across the region.

Before leaving the holy place, the vandals left two HDP flags. The party has many Kurdish members.

For some observers, incidents like this one are nothing new. Acts of provocation are commonplace at election time.

In fact, Turkish voters are getting ready to cast their ballots next Sunday, a vote that will determine the fate of the Justice and Development Party (AKP), which has ruled the country since 2002.

When informed of the incident, the Ecumenical Patriarch Bartholomew I expressed his regrets and indignation, calling on law enforcement agencies to shed light on what happened. In the capital of Crete, churches vandalized and icons burned
Cases of vandalism in churches of Heraklion and graffiti in Arabic left by criminals, which have become more frequent, are causing the authorities and the Archdiocese of Crete serious concern.
Comments
×