Archpriest Peter Sukhonosov
The newly founded Monastery "of New Sinai" was established at the parish Church of the Protecting Veil of the Mother of God of the Ordzhornikidzevskaya stanitsa (a stanitsa is a Cossack village. Its former name is Sleptsovskaya) in the Ingush Republic in March 2014.

The Ordzhonikidzevskaya stanitsa became famous owing to Archpriest Peter Sukhonosov, who served here for many years. He was kidnapped by bandits on March 28, 1999, and was martyred by them.

The church where Fr. Peter had served fell into decay and was torn down, and a new church has been built on its site.

There are not many monks in the monastery so far, but the monastic life has already been arranged here today, and the spiritual-educational work is carried on. The newly established monastery gives spiritual guidance not only to a small number of Orthodox residents of neighbouring stanitsas and towns of Ingushetia, but also to military men from the units, stationed in the republic, as well as Ministry of Foreign Affairs subdivisions and frontier posts. 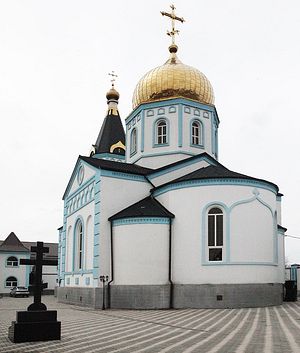 Novice Nikolai Kizimov, who is in charge of coordination with media and military structures, has reported to a correspondent of Military and Naval Clergy's Bulletin, that the monastery's brethren are frequent guests at the outposts, situated in the mountainous Jeirakh district and at the frontier directorate of Federal Security Service in the Ingush Republic, on whose territory a chapel is erected. There is a cooperation agreement with headquarters of the units of Defense Ministry and Interior Troops of the Ministry of Internal Affairs of Russia, stationed in the republic. A treaty was concluded with the republic's Ministry of Internal Affairs concerning a spiritual guidance to the detached law-enforcement officers on the territory of Ingushetia, sent from central regions of Russia.

Thanks to the support of Yunus-bek Yevkurov, head of the republic, the monastery's abbot delivers a pastoral speech once a week on local television to Ingush residents. This is met with a keen interest and response not only among Orthodox, but even among Muslims. The abbot plans to hold regular meetings with the republic's school and university students within the framework of study of the fundamentals of religions. Church attacked in Ingushetia for the second time

Church attacked in Ingushetia for the second time
At 12:40 pm on Sunday, November 21, 2010 unknown persons fired a grenade launcher at the Protection church in Ordzhonikidzevskaya, Ingushetia.
Comments
×