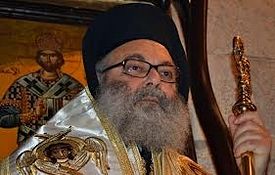 The Greek Orthodox Patriarch in Syria says Christians in the war-ravaged country "will not submit and yield" to extremists who attack "our people and holy places."

In comments to mark Easter, Patriarch John Yazigi called on the warring sides to end the practice of "intimidation, displacement, extremism and takfiri mentality," a term for Islamic extremists. Such radicals have become increasingly influential among rebels, attacking Christians who they see as infidels and partly as punishment for what they consider Christians' support for President Bashar Assad.

Christians represent about five per cent of Syria's population. Assad's forces and rebels trying to overthrow him are locked in a civil war in which more than 150,000 people have been killed. We must stand up for Middle East's persecuted Christians