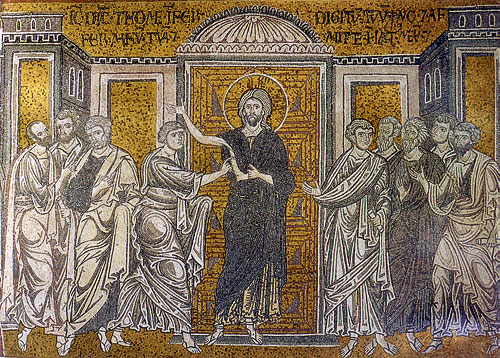 On this Sunday, the second Sunday of Pascha, we celebrate the Antipascha, that is to say the re-dedication of the Resurrection of Christ, and also commemorate the event of the Holy Apostle Thomas' touching the wounds of Christ.

This commemoration is due to the ancient custom of rededicating important events. As a year would pass and the date of such an event would arrive, a commemoration was made so that such great events would not be forgotten. This is why the Israelites celebrated the Passover at Gilgal, to commemorate the passing through the Red Sea. They also commemorated the consecration of the Tabernacle of Witness that was in the wilderness and many other holy events.

Since the Resurrection of the Lord is the greatest and most important event and beyond all thought, it is rededicated not only once a year, but also on every "eighth" day. The first rededication of the Resurrection is this present Sunday, for it is truly both the "eighth" day and the "first." It is the eighth day after Pascha, and the first day, because it is the beginning of the other days. Again, it is called the "eighth" day because it prefigures the unending day of the future age to come, which will be truly the "first" day and a day that is not divided by a single night. This is why this Sunday is called the Antipascha, which interpreted means "in the place of Pascha." We should also know that due to the honor given Sunday by the Lord's Resurrection, the Holy Apostles transferred the weekly day of rest from the Jewish Sabbath (Saturday) to this most honored day.

It is also called Thomas Sunday, the reason being as follows: On the day of the Resurrection, when Christ showed himself to the Disciples in the evening, Thomas was not present, because he had not yet joined the other Disciples for fear of the Jews. When he rejoined the others, not only did he not believe what they told him about the Resurrection of Christ and the fact that they had seen Him, but he absolutely refused to believe that Christ had risen, even though he himself was one of the Twelve. God the good Master, in His true economy, waited eight days to make His love more perfect, firmly willing to truthfully verify the Resurrection and also the events that had occurred after the Resurrection. Thus, Thomas did not believe so that he could more truthfully proclaim to all the belief in the Resurrection. Therefore, the Lord came to the Apostles again while Thomas was among them. Though the doors were shut as before, He entered and granted them peace according to the custom. He then turned toward Thomas and said, "Reach your finger here, and look at My hands; and reach your hand here, and put it into My side. Do not be unbelieving, but believing" (John 20:27). Then Thomas intentionally scrutinized the Lord's side more attentively, and receiving faith through the examination, he cried, "My Lord and my God!" (John 20:28). He said "Lord" in witnessing to the bodily form of Christ and "God" in witnessing to His Divinity. Then Christ said to him, "Thomas, because you have seen Me, you have believed. Blessed are those who have not seen and yet have believed" (John 20:29). This was the second appearance of Christ.

Thomas was called "The Twin" for one of several possible reasons: either he was born a twin - one of two children born at the same time; or because he was born doubtful of the Resurrection; or because by nature the middle finger and the index finger of his right hand were joined together. Since by Divine Providence he was allowed to doubt, it was with these certain two fingers that he would probe Christ's side. Yet, others say that it is more likely and more truthful that Thomas, being interpreted, means "twin."

The third appearance of Christ was at the Sea of Tiberias during the catching of the fish where He even ate a meal of broiled fish and honeycomb; this particular food, as He alone knew, was consumed by the Divine Fire. This event gave further proof of the Resurrection of the body - not only His, but ours in the Age to come. After this, He revealed himself on the road to Emmaus. The fifth time He appeared was in Galilee to the eleven, as it is written. From the Resurrection until His Ascension, He worked before His Disciples many signs that surpassed all nature. However, He did not reveal all these signs to very many, for it was impossible for men yet living in this world to hear such inexpressible wonders.

Through the prayers of Your Holy Apostle Thomas, O Lord Jesus Christ
our God, have mercy on us and save us.
Amen. St. Thomas Sunday
Fr. Sergei Sveshnikov
Although from the very early morning on the day of the resurrection the good news of the resurrection was carried throughout creation, and even though angels from heaven (Mark 16:6) and holy myrrhbearers on earth (Luke 24:9) and even the guards at the Sanhedrin (Matthew 28:11) had already told of the miracle, the apostles were still in a state of fear and doubt, hiding behind doors and locks “for the fear of the Jews” (John 20:19). In the Steps of the Apostle Thomas
Priest Paul Martin
It takes real courage to become a Christian in India — and it takes courage to remain Christian. Converts are often rejected by family and friends, but they know that to be rejected for love of Christ is cause for rejoicing. One man told me that, when he converted and his home became a center of Christian worship, the villagers threatened him and his family with bodily harm. He remained firm, however, and now years later many in his village are Orthodox. Unfortunately, this does not always happen. And even when it does, acceptance and peace come gradually and often with pain.
Comments
×