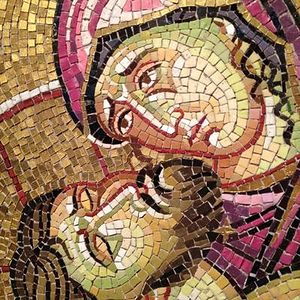 Visitors will see several original, large-scale pieces by the artist, both paintings and mosaics/marquetry, as well as a series of works on clear acrylic depicting Angels of Peace. Most of the acrylic pieces on display comprised an important presentation of Greek culture at the 2004 Olympic Games held in Athens, while others were created for use in chapels and at home. The exhibition includes video updates on Tsotsonis’ current efforts at the Basilica of St. Mary’s, and also explores the establishment and growth of Arab American Orthodox communities.

“This is sacred art even for people not of the same faith,” said the AANM’s researcher Matthew Stiffler. “It is a window into how other people believe.”

And that is part of why Stiffler says the exhibit touches so many people and explains why a “Christian” exhibit is on display in an Arab-American museum.

He said about 50 percent of Arab Americans are Christian, and about half of those people are Orthodox Christians.

The exhibit, which is open until June 1, features 30 different pieces, is also known for its colorfulness.

“It’s so vibrant, it just jumps right out at you visually,” Stiffler said.

Stiffler said it took Tsontsinos and his entourage about three days to assemble the artwork, which was shipped from Greece to Dearborn.

According to the guest book, visitors to the exhibit have been particularly fond of the mosaic work Tsontsonis included.

Thousands of visitors have come through already, and at least as many more are expected while the exhibit is in Dearborn.

Around the world, Tstosinos’ work can be found in many places, including Jerusalem’s Church of the Holy Sepulchre. Art of Byzantium from Greek Collections Premieres at National Gallery of Art, Washington

Art of Byzantium from Greek Collections Premieres at National Gallery of Art, Washington
In the first exhibition devoted to Byzantine art at the National Gallery of Art, Washington, some 170 rare and important works, drawn exclusively from Greek collections, will offer a fascinating glimpse of the soul and splendor of the mysterious Byzantine Empire.