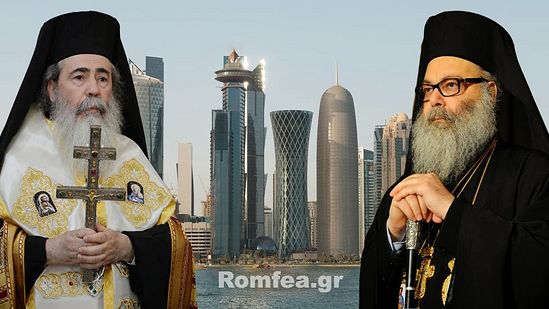 The reason of the break-off is the dispute on the canonical jurisdiction of Qatar territories, to which both Local Churches have claims.

"On April 29 this year, in the premises of the Balamand Institute of St. John the Damascene, the Holy Council of Antioch was urgently convened under the chairmanship of His Beatitude Patriarch John X. Their Eminences George (Jabal Lubnan), John (Latakia), Elias (Beirut), Ilia (Hamah), Saba (Hawran), George (Homs), Basil (Akkar), Ephraim (Tripoli), Ignatius (France), Isaac (Germany), and Their Eminences Musa (al-Huri), Ghattas (Hazim), Kosta (Kayal), Athanasius (Fahd), Demetrius (Sharik), Ilia (Tama), Nicolas (Baalbaki), press secretary of the Council and of His Beatitude Ephraim of Ma'loula and the Council's secretary Priest George (Dimas) were present at the meeting," reads the statement of the press-secretariat of the Holy Antiochian Council.

The Council discussed the development of the conflict between the Church of Antioch and the Patriarchate of Jerusalem:

"On March 4, 2013, the Patriarchate of Jerusalem elected Archimandrite Makarios as head of the newly-established (by Jerusalem itself) Archdiocese of Qatar, whose territory belongs to the jurisdiction of the Church of Antioch as a base unit of the Archdiocese of Baghdad, Kuwait and the Arabian Peninsula. On March 10 the same year, Archimandrite Makarios was consecrated a Bishop and raised to the rank of Metropolitan with the title "Metropolitan of Qatar" in spite of the active protest of the Patriarch of Antioch, who expressed his dissatisfaction to the Patriarchs of Jerusalem and Constantinople during telephone negotiations with them. After that, on March 6 and 8 the same year, His Beatitude Patriarch of Antioch strengthened his oral protest by his two messages, addressed to the Patriarchs of Jerusalem and Constantinople. There was no reaction on these letters.

On March 13, 2013, the Patriarch of Antioch urgently summoned the Holy Council, at which it was decided to consider the actions of Jerusalem as an encroachment on integrity of the Church of Antioch; the Council called upon the See of Jerusalem to settle the conflict (which might lead to break-off of the Eucharistic communion between the sister Churches) as soon as possible and to reconsider the Geneva agreements, worked out by the preparatory commissions to the Great, Holy, pan-Orthodox Council. At the earliest possible date delegations of the Patriarchate of Antioch held negotiations with other Local Orthodox Churches, which included the issue of above-mentioned actions of the Church of Jerusalem, which posed a threat to integrity of One, Holy, Catholic and Apostolic Universal Church.

The meeting of the Holy Council of Antioch in June 2013 again discussed the problem of the so-called "Archdiocese of Qatar". The fathers made the decision to respond to the initiative of the Ecumenical Patriarch and to be present at the negotiations with the delegation of the Church of Jerusalem at the Ministry of Foreign Affairs of Greece on June 21, 2013. The negotiations, held at the time appointed, led to signing of the agreement, which ordered abolition of the "Qatar Archdiocese" of Jerusalem as well as settlement of the presence of the Patriarchate of Jerusalem on the territory of Qatar according to the established Church tradition.

Nevertheless, the See of Jerusalem, in spite of all efforts of the Greek government and the Patriarchate of Constantinople, refused to implement the requirements of the signed agreement. Therefore, in accordance with the canon law of the Church, the Holy Council, assembled in October 2013, directed to make up a special commission, authorized to solve the emerged problem within two months; otherwise, the Church of Antioch, in its turn, promised to break off the Eucharistic communion with Jerusalem. Receiving the invitation to the Phanar assembly of heads of the Local Orthodox Churches (March 6-9 this year), the Patriarch of Antioch postponed the implementation of the decision of the Council of October last year. However, the above-mentioned problem was not discussed at the Phanar and was not included in its agenda, in spite of requests of the Antiochian delegation. The latter was given by the Ecumenical Patriarch the message of the Patriarch of Jerusalem of February 29 (sic.), in which he announced inclusion of "Syria and Arabia" into the jurisdiction of Jerusalem. Later, the Antiochian side refused to sign the resulting document of the assembly and to take part in the joint solemn service on the feast of Triumph of Orthodoxy.

Based on the above-mentioned facts, with hardheartedness of the hierarchy of the Church of Jerusalem and powerlessness of other Local Orthodox Churches somehow to settle the conflict in accordance with canon law, the Church of Antioch makes the decision to break off the Eucharistic communion with the See of Jerusalem.

Thus, reminding that the Archdiocese of Baghdad, Kuwait and the Arabian Peninsula, embracing Iran, Iraq, Kuwait, Bahrain, the Kingdom of Saudi Arabia, United Arab Emirates, Qatar, Oman and Yemen, is the jurisdiction of the Church of Antioch and any other Orthodox presence on this territory must be regulated by church traditions and canons, the Holy Council of Antioch has ruled:

—To annul the second clause of the resolution 2-5/2013, adopted at the meeting in October 2013 as useless, in full measure restoring the Antiochian Church presence in all countries of the jurisdiction of our Church;

—To ask His Beatitude to address heads of the Local Orthodox Churches to familiarize themselves with this resolution and with the request to settle the present conflict, which is posing a threat to the universal witnessing of unity of the Church;

—To authorize His Beatitude to take all necessary measures to implement the present resolutions or their abolition in case of a settlement of the conflict.

After discussing other matters, the fathers of the Council offered up prayers for peace in the region and all around the world, addressing all their brothers with Paschal greetings, asking them for their holy prayers for all Antiochian lands, so that Christ, Who died and risen from the dead, should fill them with the power of His Radiant and Glorious Resurrection. Fr Touma Bitar on the Situation in the Patriarchate of Jerusalem
Archimandrite Touma (Bitar)
Woe to anyone who causes one of these little ones to stumble! Woe to those who feed themselves but do not feed the sheep!The lambs of the See of Jerusalem do not have anyone who feeds them! Why? Because they are Arab! Church of Antioch may break off relations with Patriarchate of Jerusalem

Church of Antioch may break off relations with Patriarchate of Jerusalem
The Greek Church news agency Romphea has reported the decision of the Synod of the Church of Antioch regarding the issue of jurisdiction over the state of Qatar, stated by the Patriarch of Antioch. TRYFtheGREEK 7/19/2019 5:00 pm
why worry ? create a new Antiochien Diocese in Qatar, next door to the jerusalem Diocese and let the people choose which they 'd join, or let them join both if they can afford...or choose the cheapest membership

Philip Howard8/2/2016 1:49 am
This is incredibly a sad thing to see this division . Not making a statement as to who is right or wrong as I am only a catechumen. A Roman Catholic who has found the truth and beauty of Orthodoxy. I must say that locally here in Indiana, the local Greek Orthodox Church has welcomed me with Christian love. I have been welcomed by the priest and laity. May God protect the Orthodox Church and preserve her

Angela K Johnson6/7/2016 10:19 pm
Our patriarchs are allowing the evil one to tear our Holy Orthodox church apart! Lord Have Mercy on us all.

Rev. Nicholas Simpson7/17/2015 5:05 am
Wow!! How can we ever expect the Protestant Churches to come home when we see the same fights going on in the Orthodox Church..

Joseph Greenwood8/30/2014 5:06 am
It is indeed good to pray for one's enemies, as the Saviour commanded His disciples.

There is however a difference between this spiritual work and the commemorations of the Holy Anaphora. St. Maximos the Confessor would not enter into communion with the See of Constantinople at the time of the Monethelite heresy, so long as they were still commemorating in the Holy Anaphora the names of Sergius and Paul and others who had supported heretical and compromised positions, and had been explicitly condemned by other Synods of the Church (such as the First Later at Rome in 649, I believe).
The Anaphora includes only the faithful members of the Church (for example, the catechumens are dismissed beforehand), in the offering and receiving of the Body of Christ.

Perhaps it would be more sensible to keep in mind the Jerusalem Patriarchal Church at the petition of the Great Litany: "... For the holy Churches of God, and for the union of them all ... "

SLG7/14/2014 10:07 am
There is no reason for Jerusalem to be in Qatar. As we have all seen before, this seems like an ethnic problem. Jerusalem (which is run by Greeks, despite there being a larger presence of Palestinian Arabs and Russian Jews) is doing what the Greek Churches do: find new territory. Orthodoxy cannot keep claiming to be the One Holy Catholic and Apostolic Church and tolerate such arrogance and division. The Greeks separate themselves from everyone else. The Russians do it. The Serbians do it. Everyone of the so called Orthodox countries does it. They say we are one, and yet they will look after their own ethnicity, not the spiritual family members. I have experienced it time and time again, and I have seen it particularly in the Greek churches. It has already been said. Let's stop the hypocrisy. Let's stop this in fighting. Orthodoxy is growing in the west, but in many of the countries where Orthodoxy is protected it is shrinking. Protestantism is growing in the Middle East, and I dont blame people for moving to them. Why stay in a church that is mostly about being 'Ethnic' or is protected, while others are being persecuted. Let's be Orthodoxy Christians for a change.