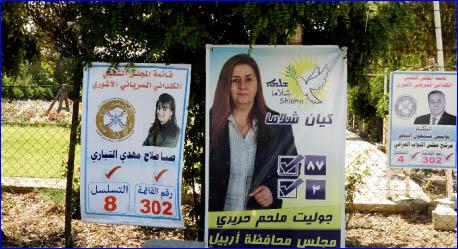 Christians of Kurdistan, including those who fled Bagdad to settle in Kurdistan, are enjoying a stable and secure life in the region.

They took part in the elections and voted for their candidates freely without any pressure.

A citizen said that the Christians cast their votes according to their personal convictions and they have high hopes to participate in the political process.

Khairy Askary, one of the activists in the Cultural Centre of Kild and Syriac in Ankawa, says that they make their own decisions freely in Kurdistan and they're vibrant participants of the society.

No political, ethnic or religious groups put pressure on them.

Christians here participated in the elections that are something quite significant for us. He says:" it's true that many lists and blocs inside Ankawa were competing with one another, but this is an inherent part of the democratic process."

Ano Jawhar Abdoka, who's one of the KDP's officials in Ankawa, told us that all the above mentioned lists took part in the election campaign and the elections successfully.

All the parties participated in the process without any hindrance. "We as Christians of Ankawa are lucky that our lives are secure and we're enjoying the freedom of taking part and selecting our candidates," Abdoka said.

In Ankawa, the civil society organizations, local and international observers and media played an active role to maintain the election process free and fair.

"The most important thing is that, in contrast to the rest of Iraq, we participated in the process with our own political will and chose our own candidates," Abdoca went on.

"We're lucky that our citizens can participate and influence the social and political life."

"Christians and Assyrians in the Kurdistan Region are free and do not have such grave problems like the Christians in the other parts of Iraq like Baghdad for example." This is what Romeo Hakari, Secretary of Baytunahreyn Democratic Party, said.

"There are no ethnic and religious discriminations between Kurds and Assyrians, or Muslims and Christians in Kurdistan, all are living in brotherhood," said Hakari. He remarked that they all celebrated the Easter and participated in the election campaign and the voting process.

When one looked at the election posters during the campaign in Ankawa, one would feel the diversity of the democratic process. Vicar of Baghdad: ISIS is beheading Christians, but nobody believes it

Vicar of Baghdad: ISIS is beheading Christians, but nobody believes it (interview)
Much of the media has said that the stories of atrocity are exaggerated, or at least unverifiable. I asked Rev. White if they were true. The kingdom of heaven
Today, we continually ask the question of radical Islam: “Why do you hate so violently? Why are you so intolerant?” Maybe, just maybe, we should have asked that question of European leaders long ago — historically speaking.
Comments
×