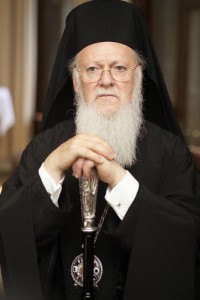 Patriarch Bartholomew I, who has been the leader of Orthodox Christians since 1991, has earned a reputation for being reform-minded. Just a few weeks ago, he was able to win over 11 national Orthodox churches for a pan-Orthodox council in 2016 - the first of its kind since the East-West Schism in 1054.

The intent of the 2016 meeting will be to strengthen Orthodox unity and discuss the future of the church. That goal could come into play during the patriarch's visit in Germany, when he meets with representatives of Orthodox branches that do not have Greek roots. It's possible that meeting with the members of Germany's association of Orthodox bishops could serve as a kind of test case for the broader congress in two years.

Recognition from the ecumenical movement 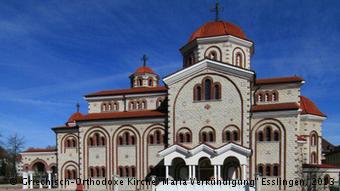 The Esslingen Greek-Orthodox Church
Might the Orthodox Church's planned synod have a positive impact on dialogue with Catholics and Protestants? Bartholomew I has shown a pro-ecumenical approach since assuming the role of patriarch, and that is reflected in the list of visits he will make in Germany. In Bonn, he will meet for discussions with the German Bishops' Conference, whose chairman, Reinhard Marx, will also receive the visiting patriarch twice in his function as archbishop of Munich and Freising in the Bavarian capital.

The Faculty of Catholic Theology at Munich's Ludwig Maximilian University, where the patriarch once studied, will award him an honorary doctorate. That could signal appreciation on behalf of Catholics for the Orthodox leader's work in favor of ecumenicism. Together with Pope Benedict XVI, Patriarch Bartholomew I pursued unification talks after centuries of silence between the two churches.

In March 2013, Bartholomew also became the first of his church's patriarchs to travel to Rome for the Roman Catholic papal inauguration since the division of the two churches 959 years prior. At the end of May, the patriarch will once again meet Pope Francis for discussions during the latter's trip to the Holy Land.

The 270th successor to Andrew the Apostle can also look forward to similar tributes when meeting with Protestant church leaders. His agenda includes encounters with various heads of churches at the state level in Germany and with Nikolaus Schneider, the chair of the Council of the Evangelical Church in Germany (EKD), as well as a public speech in the Berlin Cathedral. 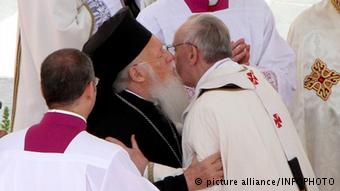 Patriarch Bartholomew I and Pope Francis. (Photo: Ravagli/Infophoto)
The Evangelical Academy Tutzing will honor the patriarch with its Lion of Tutzing award on May 17 for Bartholomew's engagement on behalf of "worldwide ecumenicism," representatives of the Protestant think tank said.

The head of the Orthodox Church will meet for separate conversations with the head of the German parliament, the German president and with Chancellor Angela Merkel - an honor that very few guests receive. They will have plenty of topics on the agenda, such as Christians being driven out of the Middle East and Northern Africa, the situation facing Christians and Christian refugees in light of the Syrian civil war as well as the conflict between Ukrainians and Russians, in which members of Orthodox churches are fighting against one another.

In the patriarch's Easter address, he wrote, "In our times, the drums of death and darkness beat frantically." 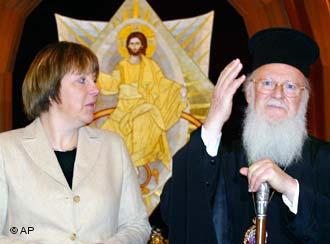 Angela Merkel and Patriarch Bartholomew I in Turkey, in 2004. (Photo: AP Photo/Osman Orsal)
The Patriarch of Constantinople has his seat in Istanbul, but the relationship between his church, officially known as the Ecumenical Patriarchate of Constantinople, and the Turkish state is deeply strained. The few thousand remaining Orthodox Christians in Turkey face discrimination and repression.

In 1971, the Turkish government at the time closed an Orthodox seminary at Halki, an organization essential to the patriarchate's continued existence. Since priests could no longer be trained there, believers and the church as a whole eventually lack the leaders they need. Patriarch Bartholomew has fought for the seminary's reopening - so far without success.

It's possible that he will discuss this and other issues of state repression with Turkey's ambassador to Germany, who is also among the many to receive the Orthodox Church's highest dignitary. Theological school on Chalki not to open

Theological school on Chalki not to open
The Turkish authorities have not included this issue into the so-called "democratization packet" that was promulgated several days ago.
Comments
×