On Orthodoxy and eating disorders 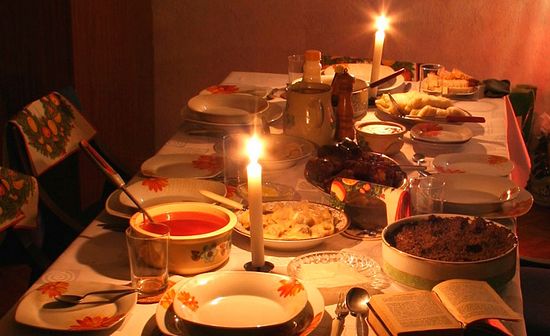 One cannot encounter Orthodoxy without also encountering food aplenty. People customarily do not eat their first meal until after receiving the Eucharist, so eating together comes to define the community. Along with the times of feasting, four fasting seasons collectively span sixteen to twenty-two weeks each calendar year, giving rise to popular Orthodox cookbooks featuring extensive “Lenten” sections with fast-friendly recipes.

While I rejoice in the way shared meals can unite believers, as an Orthodox Christian in recovery from bulimia, I also find the Orthodox stress on food challenging. Eating disorders are rarely discussed within Orthodox parishes. When this topic does arise, efforts to ensure doctrinal soundness inadvertently frame “the Orthodox response” to eating disorders in a manner that seems at odds with advice from medical and mental health professionals.

Especially notable is how the Orthodox Church and eating disorder treatment professionals have remarkably dissimilar understandings of the concepts of sin and control.

The word sin arises surprisingly often in the context of eating disorder treatment. Treatment professionals are accustomed to working with people across the entire religious spectrum who believe themselves to be bad, sinful, and at fault for developing eating disorders in the first place, labeling their eating disorder symptoms as concrete instances of sin in their lives. Some seek treatment after being shamed for their eating disorders by members of their religious communities who have oversimplified the solution to “Go and sin no more” rather than considering the myriad factors that can lead to an eating disorder.

This brings us to the concept of control. Within the Orthodox spiritual tradition, control is linked to a sense of mature self-mastery. However, eating disorder treatment professionals view control almost exclusively as a symptom of illness. Many people with eating disorders use control over food as a strategy for coping with chaotic experiences such as trauma, major depression, and changes occurring in the body.

Thus, Orthodox Christians recovering from eating disorders live at the intersection of the recovery community and the community of Orthodox believers, finding themselves constantly needing to discern the exact messages that each community intends in order to pursue healing, wholeness, and theosis.

When an Orthodox Christian in recovery tries to explain why members of the Orthodox Church fast, he is extremely careful to frame the issue appropriately within a treatment setting. Take, for instance, St. Basil who says, “Nothing subdues and controls the body as does the practice of temperance. It is this temperance that serves as a control to those youthful passions and desires.” Treatment professionals respond by emphasizing how surrendering control is absolutely necessary in order to recover from the eating disorder. With divergent meanings of control, the Orthodox Christian feels torn between faith and recovery.

Because another symptom of eating disorders can be seeking messages to glorify destructive behaviors such as restriction, a person struggling with anorexia or bulimia could understand certain advice from the Fathers on fasting as glorifying eating disorder behavior. Instead of continually exalting self-control, Orthodox Christians providing pastoral care might better refer to St. Seraphim of Sarov: “One should make use of food daily to the extent that the body, fortified, may be the friend and assistant of the soul in the practice of virtue. Otherwise, the soul may weaken because it is exhausted.”

Orthodox Christians in recovery can educate their treatment providers on fasting as a medicine for the soul, following St. John Chrysostom: “For the honor of fasting consists not in abstinence from food, but in withdrawing from sinful practices.” Should a person use the fast as an excuse to engage in eating disorder behaviors, spiritual directors might remind the individual that fasting alone is incomplete without feasting.

Orthodox spiritual directors should know how these concepts are understood within the eating disorder recovery community, and it is equally vital for treatment professionals to recognize that not all uses of terms such as sin and control match common Western definitions. As a hospital for souls, the Church can best assist people in recovery by interpreting both sets of messages rightly, with the hope that Orthodox Christians with eating disorders can find necessary support.