Orthodox Church of Cyprus Lashes Out Against Gay Pride 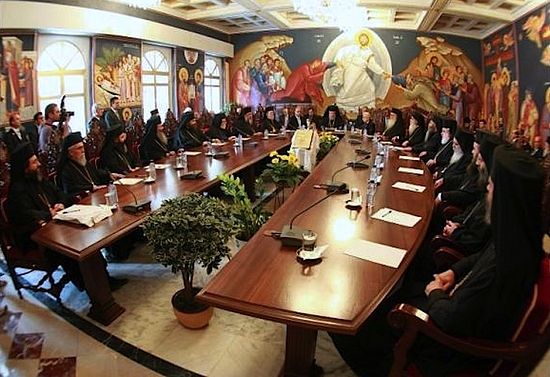 The Holy Synod, the highest decision-making body of the Christian-Orthodox Church in Cyprus, made a statement lashing out against homosexuality, after activists announced the country’s first gay pride festival set to take place May 31.

The Holy Synod said it looks at people trying to give homosexuality social and legal acceptance with “concern and grief.”

Here is the full statement by the Holy Synod:

“With concern and sorrow the Holy Synod is following what is happening and being announced in regards to the way of behavior and life of a portion of our fellowmen.

These men and women, incited and carried away by similar groups abroad and the confusion of their own conscience, argue and demonstrate that the relations of people of the same sex (homosexuality) is a natural way of behavior, which is why their choice must be received as legal evidence and socially accepted.

Indeed, in order to achieve their purpose, they have planned events of “pride”, as they call it.

However, they are contradicted and rebuked by Holy Scripture, which teaches that God “in the beginning made people male and female” (Matt. 18:14) and blessed with the mystery of marriage lawful coupling (Eph. 5:32).

At the same time, the word of God condemns homosexuality and warns its devotees of its grave consequences: “Do not be deceived: neither fornicators … nor adulterers, nor the soft (effeminate and womanish), nor homosexuals … will inherit the kingdom of God” (1 Cor. 6:9-10). This is why homosexual relationships are also a moral aberration and constitute a dishonor of the human person (Rom. 1:24-28).

The Church and Science consider homosexuality as a fall and illness of the human person, and not a natural way of life or choice.

This is why they recommend proper treatment and therapy and oppose institutional and social support and acceptance.

The tragic results of homosexuality at the local and global level, with the loosening of moral behavior, the increased incidence of pedophilia, the countless cases of victims of the incurable illness AIDS of homosexuals, the increase of divorce and family breakdown, the unnatural adoption of children, etc., consist of the strongest arguments of this atypical way of life.

As a Church we always stand with sympathy and understanding next to our fallen fellowmen and we see them as brethren “in the image” of God.

Of course we also condemn their actions, since they are in contradiction with the word of God.

These same, however, we love and help, as long as they want it, and we hope and pray for their recovery, to have a sense of their fall and to seek the mercy of God.

Moreover, in these critical times we are going through as a people in Cyprus, we invite the Christian fullness of our Church to stay true to the immutable and eternal truths of our faith, which gives honor to man before God and makes him honorable in the family and social environment.” Patriarch of Serbia calls gay parade a rally of perversions and vices
This year again in the Serbian capital a weeklong action, "Gay pride parade" is being prepared, rich in various events, exhibitions and concerts popularizing different manifestations of the LGTB community's activities. Christian rapper Bizzle challenges ‘Same Love,’ gets different hate
When Macklemore and Ryan Lewis performed their gay rights anthem “Same Love” at the Grammy Awards, it was the last straw for Christian rapper Bizzle, according to an interview with All Hip Hop. Soon afterwards, he released his own song “Same Love (A Response)” about the biblical view of homosexuality. The song has prompted hate mail and death threats from the very people crying for tolerance.
Comments
×