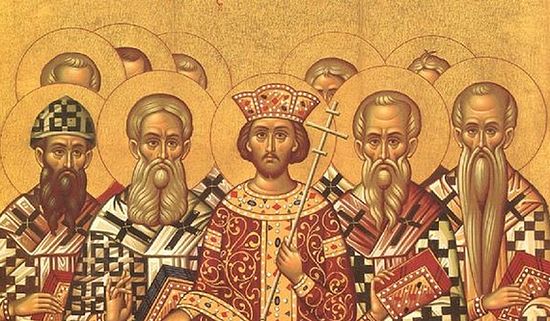 Mark your calendars: In 2025, Roman Catholics and Eastern Orthodox Christians may return to Nicaea, the spot in modern-day Turkey where Christianity was literally defined. In 325, early followers of Jesus came together to figure out what it means to be a Christian; the goal was to create theological consensus across all of Christendom. This was way before the faith sub-divided into East vs. West, Catholics vs. Protestants, Southern Baptists vs. Primitive Baptists—these were the early days of the religion, when it still seemed like it could be observed as one, united faith. The council's effect on Christianity was huge; for one thing, most Bible-school students still learn some version of the Nicene Creed, the profession of Christian faith.

On his way home from a meeting with Pope Francis in the Holy Land, Patriarch Bartholomew I, the primary leader of Eastern Orthodox Christians,gave an interview in which he said that he and Francis are planning a gathering in Nicaea 11 years from now "to celebrate together, after 17 centuries , the first truly ecumenical synod." That's a pretty big deal; in 1054, theological disagreements led to a schism in Christianity, which is how Roman Catholics and Eastern Orthodox Christians became separate faith traditions. This is a call back to a time before the schism, before the fundamental disagreements that kept popes and patriarchs from talking to each other for more than 900 years.

But the specifics are still pretty fuzzy. Will it be a formal ecumenical council, with leaders from the two faiths earnestly trying to reconcile their theological differences? Or will it be just what Bartholomew said—a celebration, full of meaningful dialogue but little actual change? Hard to tell, says Rocco Palmo, the author of the blog Whispers in the Loggia.

"It's 12 years away," he pointed out. Trying to predict what will happen in 2025 is like an extreme version of confidently declaring who will be president of the United States in 2016—there's just no way to know. Plus, Francis and Bartholomew are both in their 70s. Bartholomew said the pair wanted to leave this council "as a legacy to ourselves and our successors," which seems like an acknowledgment that they could both be dead—or retired—11 years from now.

There's also the challenge of getting Catholics and Orthodox Christians on board for whatever they want to do. "If the pope wants to do this, the Catholic side will be lined up, but if the ecumenical patriarch wants to, some will come and some will not," Palmo said. Bartholomew is the archbishop of Constantinople, meaning that he is "the first among equals" in the Eastern Orthodox churches, but he doesn't have power over other patriarchs.

And besides, Palmo said, Francis still has work to do at home—for example, his synod on day-to-day Catholic teaching on the family, to be held in October. "He's got to pull this synod off first—his successor can roll back anything, which is why he is taking his time," Palmo said.

But is there a possibility that this could be a serious attempt to reconcile the division between East and West? Yes. "It's a beautiful hope," Palmo said. "It's the prayer that Jesus had." Metropolitan Kallistos (Ware) to offer reflections on 50th Anniversary
His Excellency Metropolitan Kallistos (Ware) of Diokleia will be presenting a lecture, entitled, "Let Us Embrace Each Other: Reflections on the 50th Anniversary of the Meeting Between Pope Paul VI & Ecumenical Patriarch Athenagoras in Jerusalem," on June 28 - June 29, 2014. The lecture is presented by St. Herman of Alaska Orthodox Church in Gradyville, PA. Reveal Your Saints and You Reveal Your Church
Gabe Martini
For many, this event is little more than a well-leveraged commemoration of an extended olive branch between these two ancient, Christian faiths. For others, concern over the future of their respective churches takes center stage. Will this event be used as an impetus for doctrinal compromise? Will the future of either Eastern Orthodoxy or Roman catholicism hang in the balance as a result of this pending exchange of pleasantries?
Comments
×