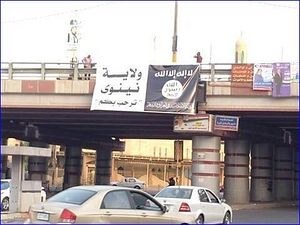 An ISIS flag hangs from a bridge in Mosul. On the left it says "Nineveh Governorate welcomes you" and on the right it says "There is no God but Allah."
The Islamic State of Iraq and Syria (ISIS, also known asDa'esh and ISIL) yesterday took control of Mosul, Iraq's second largest city. Various agencies are reporting that between 150,000 to 500,000 residents have fled Mosul. Two divisions of the the Iraqi army which were stationed in Mosul abandoned their posts and fled, offering no resistance to the invasion. According to reports, the army personnel donned civilian clothing and left Mosul by blending in with the fleeing residents. Some reports say the Iraqi commanders in Mosul said they were given orders not to fight but to flee, but this has not been confirmed.

AINA contacted a former member of the Iraqi Parliament, whose identity cannot be revealed for his safety, who said "The Mosul provincial government was in collusion with ISIS. The innocent citizens of Mosul are paying the price of the manipulations of Atheel and Osama al-Nujaifi."

Atheel al-Nujaifi is the current governor of the Nineveh Governorate and is a hard-line Sunni. It is reported that he fled Mosul ahead of the ISIS attack.

Today the city of Tikrit, a Sunni stronghold, also fell to ISIS. A source from Tikrit, which AINA contacted via email, said "We are now calling on all international organizations for help because we are terrified by what we are hearing from the street. I wish you could convey our voices to those who can help to end the farce. The people are currently in the hands of a conspiracy between the government and the militias." She added "In Tikrit today, the prisons were opened and looting and pillaging began." 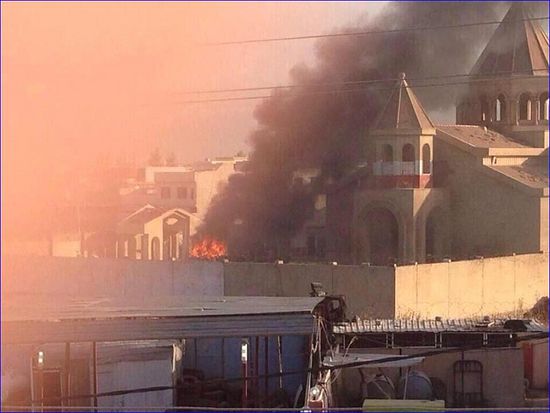 According to reports from Mosul, ISIS has gone on a rampage, looting and burning government buildings, raising its black flag throughout the city and burning churches. According to an AFP report, it stormed the Turkish consulate yesterday and kidnapped 48 people including the head of the diplomatic mission.

World Watch Monitor reported that ISIS have moved into Christian areas near Mosul, and have occupied the Assyrian (also known as Chaldean and Syriac) village of Qaraqosh and entered the St. Behnam Monastery.

ISIS has warned the Christian residents of Mosul, specifically women, to wear the Islamic veil. The warnings have come at checkpoints setup throughout the city by ISIS. The husband of an Assyrian woman was abducted at a checkpoint and threatened with death if his wife did not don the Islamic veil.

ISIS members bombed an Armenian church which was under construction in the Left Bank neighborhood, near al-Salaam hospital.

The Church of the Holy Spirit was looted by ISIS members, who removed most of its electrical equipment.

Patriarch Sako of the Chaldean Church issued a statement to Fides, saying "We believe that the best solution to all these problems is the creation of a government of national unity in order to strengthen the control of the State and the rule of law in order to protect the Country, its citizens and their property and preserve national unity." If war is not the answer, then what is?
We still get the occasional finger, catcall, obscenity or argument, however. And recently a person walked up to us and angrily shouted several times in our faces, “You are offensive” — giving us no opportunity to respond. Some who stop are veterans home from Iraq or Afghanistan, and most of these — having personally experienced the horror and insanity of war — voice agreement with us.

The Cleansing of Iraq's Christians Is Entering Its End Game
The government of Mosul, Iraq's second largest city, fell overnight to the jihadist Islamic State of Iraq and Levant, also called the Islamic State of Iraq and Syria (ISIS). Mosul's panic-stricken Christians, along with many others, are now fleeing en masse to the rural Nineveh Plain, according to the Vatican publication Fides. The border crossings into Kurdistan, too, are jammed with the cars of the estimated 150,000 desperate escapees.
Comments
×