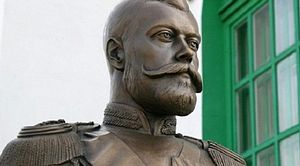 A monument to the Holy Russian Tsar and Passion-Bearer Nicolas II was to be unveiled in Bosnia and Herzegovina, reports Sedmitza.ru, citing the SRBIN INFO agency.

The author of the monument is the sculptor from Russia Zurab Tsereteli.

The monument was to be unveiled after the church service, and after the ceremony performances of the “Kazachsky Krug” Cossacks’ group, the choir of the Kostroma Ipatiev Monastery as well as a round table of Serbian and Russian historians were to take place. (The Ipatiev Monastery is historically connected with the first Tsar of the Romanov Dynasty.)

The opening of the monument is timed to coincide with the centenary since the beginning of the World War I. When in July 1914 Austria-Hungary with the support of Germany started a war against Serbia, the Serbian successor to the Throne Prince Alexander Karađorđević appealed to the Russian Emperor Nicolas II, who assured him that “Russia will not remain indifferent to the destiny of Serbia”. Soon after that Russia launched a war against Germany in order to defend their brothers, the Serbian people.

In the words of Holy Hierarch Nikolaj (Velimirovic): “Our debt to Russia is great. A person could owe a debt to another person, a nation – to another nation. But the debt the Serbian people owe to Russia for its actions in 1914 is so great that it won’t be repaid in generations and centuries. This is a debt of love, when one dies saving one’s neighbor. There is no greater love than to lay down one's life for one's friends, said Christ. The Russian Tsar and Russian people, who went to war in order to defend Serbia, entered it unprepared, knowing full well that they are facing death. But the love the Russians have for their brothers did not retreat in the face of danger and was not afraid of death”.