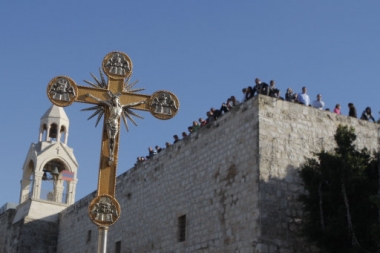 Persecution and violence have accompanied the church down through the ages
A new article series in Christian History magazine says a "global war" is being waged against Christians.

The reports are in the latest edition of the quarterly publication and co-authored by members of Voice of the Martyrs USA.

Although they particularly examine the persecution of Christians in the last 300 years, they also contains figures going back through Christian history.

The data, attributed to the late researcher David B Barrett, puts the number of Christians martyred since the time of Jesus at 70 million.

It puts the number of Christians systematically exterminated in Nazi Germany at a million, while the number of Orthodox Christians and others murdered in Russia between 1917 and 1950 at 15 million.

But that's still too many for Michael Austin, a Christian commentator and contributor to the report.

"Is there a global war on Christians?" he says. "That question is asked in this issue and judging from the number of deaths and torture in recent years, my conclusion is, yes – and the casualties are staggering.

"Sadly, the names of Christ's heroes and their inspired stories go largely unspoken today and their cause goes unreported in the popular press."

Voice of the Martyrs's Rou Stults adds that there is not enough awareness in the Western Church: "Many Christians in the West either deny or are ignorant of it, but persecution is part of present reality." New Martyrs of Sakhalin
Nun Cornelia (Rees)
As Orthodox Christians not only in Russia but around the globe attended services and sang the praises of these righteous ones of the comparatively recent past, little did they suspect that two more Russians Orthodox Christians in the Russian far east would die that day, in a way that can only be called martyric. Who were these two martyrs, and what motivated the young man who everyone described as an ordinary Russian guy, indistinguishable from anyone else in the church until he opened fire on the worshippers assembled there?

70,000 Christians killed for their faith in 2013
According to the statistics of the previous year, 100,000 Christians were killed in 2012. The situation in 2013 has not become less dramatic.
Comments

janice bauer4/17/2018 3:35 pm
just heard on EWTN Fr. Mitch Pacwa that there have now been over 75 million christians martyred for their faith. Please update this article. Thank you. Then I can give to my pastor and encourage him to talk about this topic.
×