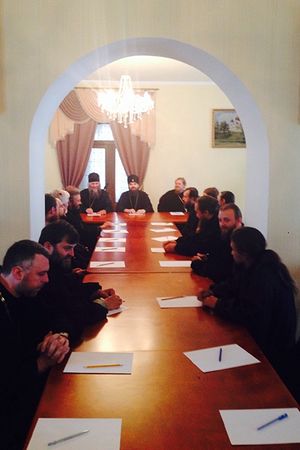 On June 26, Archbishop Mitrofan (Mitrophanes) of Horlivka and Sloviansk held an assembly of the clergy in Sloviansk, reports the diocese’s press service.

In the course of the discussion of the situation, established in the city and the region, it was decided to organize distribution of humanitarian aid in three parishes of Sloviansk: in St. Alexander Nevsky Cathedral (near the railway station), in the Churches of Resurrection of Christ (Solzavodskaya Street) and St. Seraphim (Cherevkovka village).

Sloviansk residents have not received any wages, pensions, or other social benefits for already two months. Counters of the city shops and chemists (pharmacies) are all but empty. City residents turn to the churches for the most necessary things: flour, salt, matches, pain relievers. Priests are doing their best to help all those in need, but their resources are limited.

Collection of foodstuff and medicaments for the residents of besieged Sloviansk is arranged in Horlivka churches. The collection coordinator is Krivonog Larisa Petrovna, tel.: +38 (095) 425-43-85.

Earlier the diocese already arranged the collection of medicaments and food for the city hospitals. The medical staff and patients express their enormous gratitude to all those who have opened their hearts to their trouble. Ukrainian soldiers shell another church in Sloviansk
The Church of St. Seraphim of Sarov in the Cherevkovka micro-district (area) of Sloviansk was shelled on the night of June 16. The chapel and the refectory are completely destroyed. A mortar explodes near church in Sloviansk, civilians killed

A mortar explodes near church in Sloviansk, civilians killed
The shelling started at about 19:30. Five mortars were fired towards the Artema micro-district, which damaged apartment houses and a hall of a residence where there were students.

Churches of the Diocese of Horlivka and Sloviansk praying for the dead
In Sloviansk, Kramatorsk and a number of other towns of the diocese the Ukrainian army is currently fighting against the people's militia, as a result of which civilian residents are being killed. The Church has more than once called and is now calling to stop the bloodshed and to sit down at the negotiating table.
Comments
×