Locum Tenens of the Metropolitanate of Kiev Metropolitan Onuphry of Chernovtsy and Bukovina has addressed the Ukrainian president Petro Poroshenko.

“We are especially concerned about the fact that on June 22, 2014, a large number of armed people with aggressive behavior gathered near the Kiev Caves Lavra. All this looked like an attempt of seizure of the Lavra,” reads the address of His Eminence. 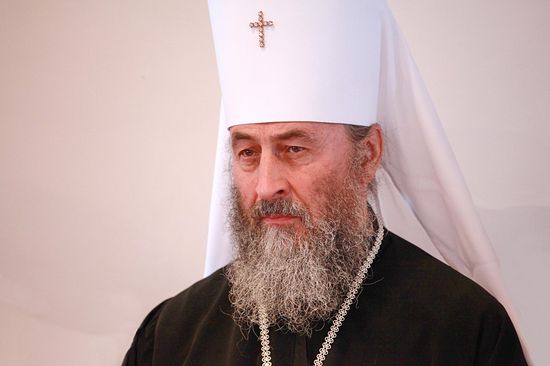 Showing our sincere respect, we are addressing ourselves to you with the following question.

The Ukrainian Orthodox Church is continuously exerting every effort to preserve peace and inter-faith accord between churches and religious organizations in the Ukraine. But, unfortunately, in spite of all these efforts, we have seen attempts to break the inter-faith (fragile as it is) peace in the state lately.

We are especially concerned about the fact that on June 22, 2014, a large number of armed people with aggressive behavior gathered near the Kiev Caves Lavra. All this looked like an attempt to seize the Lavra. By the mercy of God and thanks to the actions of the law-enforcement agencies, the situation was settled. However, events could have developed differently, which would have caused human victims and aggravated the split in society.

We are outraged by the fact that recently messages have more than once appeared in media, substantially misrepresenting our Church’s stance on the situation in the Ukraine. The news coverage around the Kiev Caves Lavra was no exception. We regard all this as attempts to contrast the Ukrainian Orthodox Church with society artificially. Such actions pose a threat to inter-faith relations and public peace.

In view of the above-mentioned facts, we apply to you for your personal intervention in the situation, and ask you to pursue all appropriate means in order to prevent attacks and seizures of churches and monasteries of the Ukrainian Orthodox Church.

Invoking God’s blessing upon you and your labors.

Metropolitan of Chernovtsy and Bukovina,

Locum Tenens of the Metropolitanate of Kiev Situation around the Kiev Caves Lavra being aggravated from all sides, according to the Lavra press service