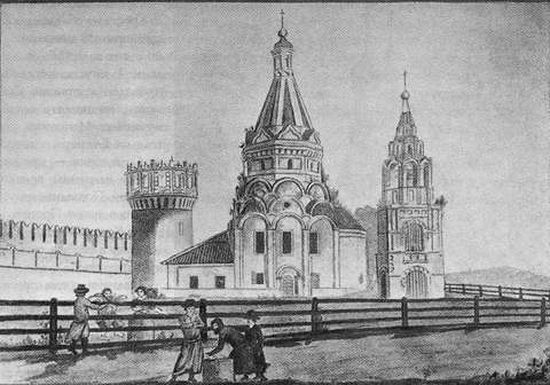 The Church of Beheading of St. John the Baptist, destroyed by the French at their retreat from Moscow in 1812, will be reconstructed near the walls of the Novodevichy Convent, reports Interfax-Religion with the reference to Vladimir Resin, State Duma deputy and adviser of Patriarch Kirill.

“The approximate, cost of the building will be 50 million rubles,” he said on Tuesday at a press conference in Moscow.

The chronicles date the foundation of this church to the year 1525 – the time of construction of the Novodevichy Convent. In September 1812, the convent was temporarily occupied by the French, who, could not destroy the whole convent as they left, but did destroy the Church of Beheading of St. John the Baptist.

As contemporary to the convent, this church was an integral part of its ensemble. One of the convent towers is called “Predtechenskaya” (“of the Forerunner”) to this day.

Architects for the reconstruction project of the lost church used 19th century engravings and drawings, but for want of detailed designs it is impossible to restore its authentic appearance. The Church was up to 30 meters in height.

Thanks to archaeological excavations, the precise location of the original church has been ascertained. At the present time this site is in the buffer zone of a UNESCO world heritage site, which dictates specific requirements: the new church must not change the existing town-planning situation radically and exceed the convent towers, which means it must not be higher than 18 meters.

The new church will be tent-roofed: firstly, because the destroyed church was tent-roofed, and secondly, it will be a memorial church in commemoration of the 200th anniversary of the expulsion of Napoleon’s troops. Memorial churches built in honor of victories of the Russian forces were traditionally crowned with a tent.

Construction of this church, which will hold up to 150 people, must be completed within a year. Moscow’s Christ the Saviour cathedral lovingly rebuilt
It was first built in the early 19th century, torn down by the Communists and lovingly recreated after the collapse of the Soviet Union. At 103 metres with its gilded dome, Moscow’s Cathedral of Christ the Saviour, the world’s tallest Orthodox Christian church, encapsulates Russia’s history through the 19th and 20th centuries. Four Armenian churches being reconstructed in Turkey
Turkey is beginning reconstruction work in the historic Armenian city of Ani, which includes four churches. The restoration works are funded by World Monuments Fund, Turkey’s Ministry of Culture and the UN Ambassadors Fund.

St. Nicholas Greek Orthodox Church To Be Rebuilt At Ground Zero
"With this agreement, we are continuing New York's collective healing, restoration, and resurgence," Cuomo said in a statement. "Now we are finally returning this treasured place of reflection to where it belongs."
Comments
×