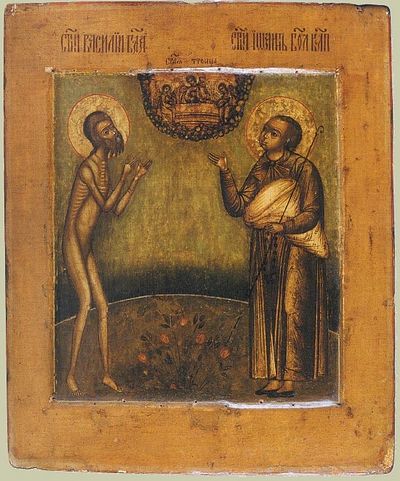 Blessed John the fool-for-Christ and wonderworker of Moscow was born near Vologda, in northern Russia. In his youth, John labored in the salt works, carrying water. Despite the heavy work, he was a strict faster, and prayed continually. Later he moved to Rostov, where he began his podvig of foolishness-for-Christ.

Foolishness-for-Christ is considered one of the most difficult spiritual labors. The ascetic bears all possible deprivations in addition to scorn and mockery from people around him who often see nothing more in him than madness and contrariness. The fool-for-Christ takes on inhuman physical burdens—not for a few days or even forty days, but continually for many years. His apparent madness, however, conceals his spiritual gifts, and he thus escapes the pitfalls of human flattery and pride.

St. John wore heavy iron crosses on his body, and on his head he wore a large iron cap, for which he was known as “John the Big Cap.” When he later came to Moscow he walked around barefoot and almost naked even in the bitterest cold.

In around the year 1580, John visited St. Irenarch of Rostov, also known to wear iron chains, and foretold to him Russia’s coming disaster. He told him, “In Moscow would be many seen and unseen enemies.” He was referring to what would go down in history as the “Time of Trouble”, when after the death of Boris Gudunov, pretenders to the throne would arise, claiming to be the Tsarevich Dimitry. Dimitry was the lawful heir to the throne, but he was murdered as a child in Uglich. Many believe that Boris Gudunov himself had the boy assassinated so that he could ascend the throne and rule Russia. The Poles took advantage of this state of confusion and invaded Moscow, setting their own puppet “false Dimitry” to rule as tsar with the aim of making Russia part of Poland, and forcing the Russian Orthodox Church to submit to the Roman Pope.

John feared God alone, and spoke the truth to every person no matter how highly placed. Even to Tsar Boris Gudunov he would often repeat the words: “You, with your smart head in the air, take a look at God’s affairs. God has a lot of patience first, but when He beats, it really hurts.”

John knew the time of his death and indicated the place where he wanted to be buried—at the Church of the Protection of the Mother of God in Red Square, which would later come to be known as the Cathedral of St. Basil the fool-for-Christ of Moscow. He prepared himself by removing his iron crosses and pouring cold water over himself three times. Not long before his death in 1589, healings occurred at his prayers. For example, one day a lame man was walking by the church as St. John was coming out. The fool-for-Christ accidentally as if stepped on his toes and he leg was restored to health.

Having received permission from the head priest of the Cathedral, St. John was buried there. During his burial, a man who had suffered from a disease of the eye was healed. His incorrupt relics were uncovered in 1672. A service to him and his Life were preserved in lists dating to the seventeenth century. Blessed Alypia, Fool-for-Christ of Kiev
Sergei Geruk
Further on in her life we read how she was miraculously freed from prison, and how the Apostle Peter appeared to her. In light of this fact and her later life of prayer, it becomes clear why she prayed so many years directly in front of the large icon of the Apostles Peter and Paul located in the right side-altar of the Demeyevsky Church in Kiev.