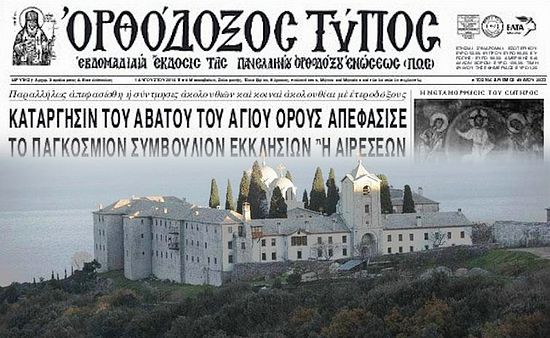 According to an article in “Orthodoxos Typos” newspaper, the World Council of Churches (WCC), during its latest convention in Busan, South Korea, decided the repeal of Mount Athos avaton, allowing women to visit the holy area.

During the convention, 16 agreements between Christian churches were signed, of which three (7th, 8th and 16th) refer to Mount Athos in Chalkidiki, northern Greece. The 16th agreement refers to the repeal of the avaton in Mount Athos and in other places of the world.

For more than 1,000 years women have been banned from entering Mount Athos. Many Orthodox women have protested against the ban saying that it is their right to visit the monastery. A European Parliament Resolution in 2003 criticized the ban as a violation of sexual equality and citizens’ religious freedom.

The World Council of Churches is an ecumenical Christian organization aiming to promote Christian unity. It is consisted of 340 churches, of which 157 are members, representing over 550 million Christians in over 100 countries.

The WCC was founded on August 23, 1948. Its founding members include the Ecumenical Patriarchate of Constantinople, the Church of Greece and the Church of Cyprus.

It includes Orthodox as well as Protestant, Lutheran, Methodist, Baptist and Pentecostal churches. The Roman Catholic Church, although not a church-member, cooperates closely with the WCC.

The response of Mount Athos Governor

The Civil Governor of Mount Athos, Aristos Kasmiroglou responded: “Mount Athos belongs to its residents and no one can enter without their permission, let alone change their rules,” pointing out that the avaton is not regulated by international conventions. John Oxford8/6/2014 9:17 pm
Soon they will claim rights over the church itself with female to male transsexuals demanding access to male lockerrooms, and restrooms, satan is surely playing his game here with these women as his pawns, and using equality as the argument.
My point here is the church must remain steadfast ignoring these coopted organisations, for if women need access to holy places, there are more than enough, in fact there are more convents where they can have their spiritual needs met. It is an absolute imperative that Orthodoxy remains unpoluted by these demands. No amount of pressure or sentiment by political ideologues can be tolerated; they must know their efforts in this arena they will loose.
Let me add, salvation does not depend on visiting Mount Athos, salvation is especially given in the most unlikely places across this fallen world. The faithful must not hold on to politised issues over equality, they must act as scripture leads obeying their leaders. Leaders of Mount Athos do not wNt women as well as the majority of men who apply for access.
It's disturbing to learn the world council of churches has been coopted as it is. It is only by on trolling your impulses that sin is defeated. To push this way is sinful requiring adult Christians to admonish those who resist the Gospels of Salvation.

Michael Martin8/6/2014 5:42 pm
Please be responsible before posting these rumors. This has been rebutted here:

In the future, please do your homework.