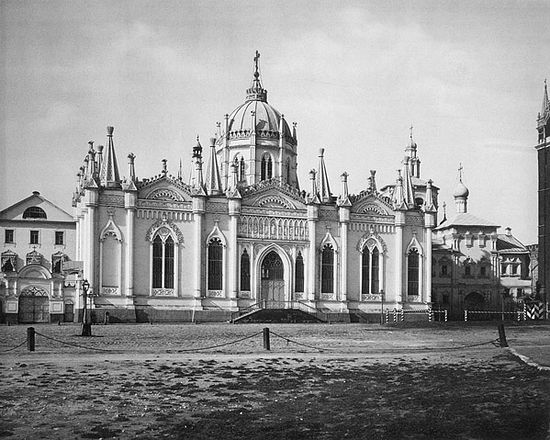 According to Sergei Devyatov, head of the department of 20th century National History at the Moscow Lomonosov State University, part of the site of the demolished Chudov (in honor of the miracle of Archangel Michael) and Ascension Monasteries of the Moscow Kremlin have survived, reports Interfax-Religion.

“Parts of the Chudov Monastery were simply paved over. Underground rooms have survived. And if the monastery is restored in its original proportion, this site will need to be excavated. I feel that certain, great discoveries await the archaeologists,” said S. Devyatov.

According to his information, some of the monastery’s premises were below ground level. They have survived and are subject to laws governing museums.

“Apart from the fragments of the Chudov Monastery, there are also ground floors of two churches, basements of the metropolitan’s apartment as well as the brothers’ quarters under the block pavement of Ivanovskaya Square (the largest square within the Kremlin. Its name comes from the John the Great bell tower). The vault of the Small Nikolaevsky Palace is also situated there, on the Ivanovskaya Square (today it is considerably larger than it was in the early 20th century). The previous excavations on this site in 1995 resulted in the discovery of the remains of Grand Duke Sergei Alexandrovich,” reminded the historian.

Last week, the Russian president Vladimir Putin proposed thinking over the idea of restoring the two above-mentioned monasteries, which had been destroyed in 1929-1930. One Kremlin administrative building now stands on their site. V. Putin stressed that such a plan could be implemented only after its approval by the public and by UNESCO.

S. Devyatov noted that the question of demolition of administrative building 14 and restoration of two monasteries on its site had been raised as early as in 2002. Architects of the “Mosproekt 2” (“Moscow project 2”) state unitary enterprise were charged with the task of exploring this question.

“But the work did not proceed. By all appearances, the idea was forgotten. However, several years ago, on the wall of Kremlin building 14 a commemorative plaque appeared with indication that the Chudov Monastery was located on this site until 1929,” he added. Moscow church destroyed by Napoleon to be restored
The Church of Beheading of St. John the Baptist, destroyed by the French at their retreat from Moscow in 1812, will be reconstructed near the walls of the Novodevichy Convent.
Comments
×