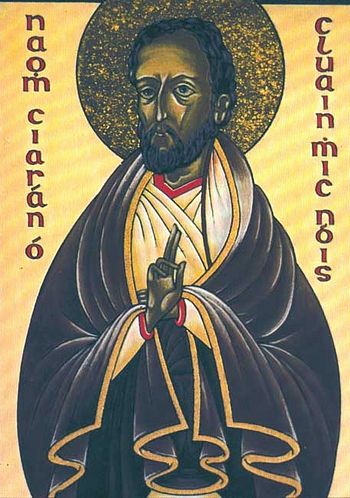 St. Ciaran of Clonmacnoise, icon.
St. Ciaran (Kieran) of Clonmacnoise is known as “Ciaran the Younger”. He was born in about 512 (about 516 is also found) to the family of an itinerant carpenter and chariot-maker in the western Irish province (and former kingdom) of Connacht on the site of the present-day county of Roscommon. The saint’s birthplace was called Fuerty and his parents’ names Beoit and Darerca. Ciaran had brothers and sisters, some of whom also dedicated their lives to the service to God. The future abbot inherited from his ancestors a deep love for wisdom and learning. He was baptized by a righteous priest named Justus, who was his first instructor in the spiritual life. In his childhood the saint worked for some time as a cowherd, helping his family. His Life attributes his first miracles to that time when as a boy he already showed signs of holiness.

Ciaran was educated by the prominent theologian St. Finnian of Clonard, the spiritual father of the “Twelve Apostles of Ireland”. Here he showed himself to be a most gifted student and one of the most zealous monks. The Lord worked more miracles through his servant. After some time in Clonard he continued his studies with another great saint of the age—St. Enda of Inishmore, on one of three islands in western Ireland known as the Aran Islands. The future saint was to spend seven years in this island monastery and it was here that he was ordained priest. The tradition says that here a vision of a great miraculous tree once appeared before Ciaran. This tree was seen growing very high from the middle of Ireland, protecting the whole “Emerald Isle” (i.e. Ireland), with its sweet fruit surrounding the country, and beautiful birds taking some of the fruit to other lands. St. Enda realized that the miraculous tree was Ciaran himself, who was great in the eyes of God and man, and who would nurture and cover with his grace all Ireland, becoming a true mentor for many. Therefore St. Enda suggested that St. Ciaran go and found a monastery in central Ireland. 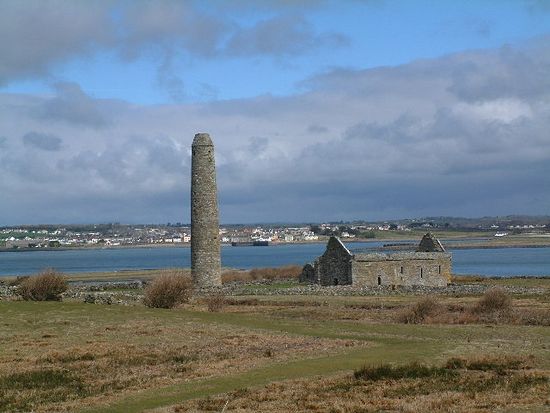 From there Ciaran then moved to Lough Ree (Lough is the Irish word for lake) where he settled on an island. There he lived the ascetic life for another seven years and built his first monastery. It is likely that at approximately the same time the ascetic also lived on Scattery Island, where his spiritual mentor was St. Senan, a great contemporary founder of Irish monasteries. The saint may have briefly visited other Irish islands, like Hare Island, where he also established small communities and worked miracles. (One of these stories is that once a monk lost the saint’s Gospel book in the lake, but in the summer when a cow went down to the water, a strap to the Gospel book stuck to one of the animal’s feet, and when the Gospel was lifted out onto the bank, all its pages and even letters appeared to be completely intact).   His labours here prepared Ciaran to fulfil the main task of his life.

About the year 544 (or 548), Ciaran eventually established his main and greatest monastery of Clonmacnoise in the present-day county of Offaly in Ireland, on the west bank of the River Shannon. He predicted that many souls would go to heaven from this site, that the Lord would be especially present here forever and that many devout Christians would always visit this place. According to tradition, the saint was told to build this monastic complex at another, more beautiful site, but the saint declined, saying that all the beauties of our fleeting life should not divert monks from their striving for heavenly and spiritual heights. Ciaran became the first Abbot of Clonmacnoise and he formed for his brethren an ascetic rule which became known as “The Rule of St. Ciaran”. Soon afterwards more than half of all Irish monasteries began to follow this very strict ascetic rule. First of all, the saint confirmed his preaching with his own example, for he was generally known as a man of faith, prayer, fasting, labour, humility, learning and discipline, as well as protector of the poor. It was recorded that Diarmait, the future high king of Ireland, much assisted Ciaran in founding the monastery and promised to endow lands for its needs. 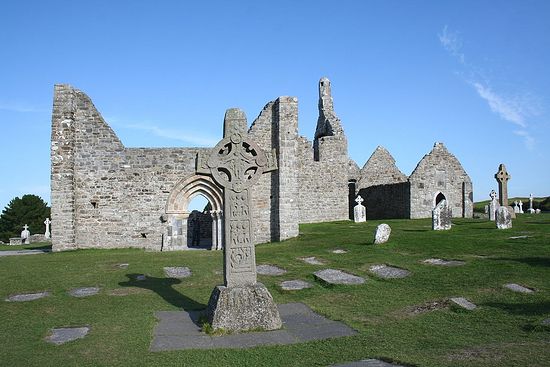 Clonmacnoise, a view from the river.

Ciaran, a great ascetic and wonderworker, is listed among the “Twelve Apostles of Ireland”. As also many other saints (and there are especially many examples among those who lived in the so-called Celtic Christian tradition), the venerable man lived in full harmony with nature. His Life recounts the story of a dun cow, which lived with the saint all its life, providing the monastery with milk. According to a legend, early in the twelfth century the skin of this cow was used to create one of the most remarkable manuscripts in the Irish language—the so-called Book of the Dun Cow. It is a collection of religious, historical, political and literary works. Today this unique folio, many pages of which are unfortunately damaged, is kept at the Royal Irish Academy.

Another story tells of when St. Ciaran was a student, a tame fox used to deliver the written tasks that he fulfilled to his teacher. Once, at a time of famine, Ciaran prayed very hard to God so that a small amount of oats he was bringing to the monastery’s mill might be turned into good wheat. And while he still was praying, a single sack of oat turned into four big sacks of wheat of the best quality! When bread was baked from this wheat, the brethren noticed that it was the tastiest bread that they had ever eaten and it even healed some of them from sickness. 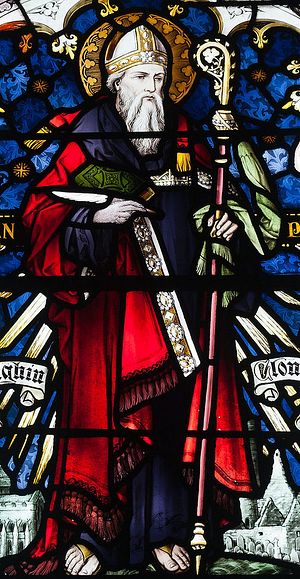 St. Ciaran of Clonmacnoise, a stained glass window.
It was said that Ciaran was so humble and meek that shortly before his death he asked his disciples not to bury his body in the ground, but just leave it on a hilltop as if his were the bones of a deer.

St. Ciaran reposed in the Lord in about 545 (or about 549), dying from the plague, living only until the young age of 33. Several other Irish saints also died of the same plague at that time. His abbacy lasted for less than a year, but over his short life Ciaran attained sainthood and remained for many centuries a father to thousands of Irish monks. St. Columba of Iona, a friend of St. Ciaran who had studied together with him in Clonard, called him “a lamp shining with the light of true wisdom.” St. Kevin, a great hermit and wonderworker of Glendalough, was also among Ciaran’s friends. Alcuin (c. 735-804), an English scholar at the Frankish court, who had studied in Clonmacnoise, referred to St. Ciaran as “the glory of the Scots (i.e., the Irish)”. Many noted chroniclers, poets, theologians, artists, architects, sculptors, historians were educated in this renowned monastic centre; for example, Dicuil, a brilliant geographer.

The monastery of Clonmacnoise, founded by St. Ciaran, at first with only his ten disciples, grew very rapidly and by the eight and ninth centuries had become the largest Irish monastery and centre of learning and culture. The same fame was enjoyed by its school-seminary, which had been founded by the abbot himself and afterwards became “a smithy of saints”. Researchers stress that this seminary was not merely of regional, but of national importance. In the eleventh century the site of the original small wooden monastery was dominated by a massive new stone monastery, in which already some 1500-2000 monks lived. In the seventh-twelfth centuries—the monastery’s period of particular prosperity—hundreds of learned monks flocked to Clonmacnoise from the whole of Europe. 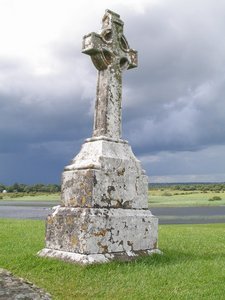 A cross in Clonmacnoise.
Clonmacnoise developed into a real monastic city and was considered to be the most famous in Ireland. The monastery could boast of its school, a scriptorium for copying manuscripts, and numerous churches. Masters from Clonmacnoise created the most excellent artworks from stone and metal in all Ireland. Many kings of Connacht and Tara were buried and rested within the monastery. By 1408 the brethren had completed writing The Annals of Clonmacnoise, which was a chronicle of historic events in Ireland from the prehistoric period till 1408. The monastery possessed a large number of high and round Celtic crosses; most of them, sadly, were destroyed by the Vikings, and in 1552 by radical Protestant-iconoclasts who ravaged and desecrated Clonmacnoise Cathedral. This holy monastery existed until the sixteenth century, and over its history suffered from forty different raids! The shrine with the saint’s relics was also subjected to desecration and pillaging more than once. However, St. Ciaran’s staff did survive and is now kept at the National Museum of Dublin. 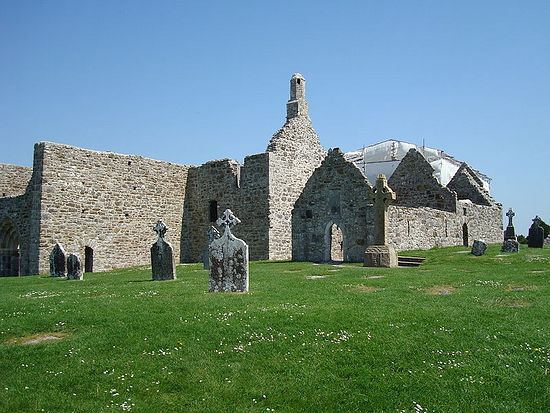 Today in Clonmacnoise, Catholic and Orthodox pilgrims visit the well-preserved ruins of the ancient monastery. On this old monastic site (the nearest town to Clonmacnoise is Athlone, some twelve miles away) very ancient churches partly survive as well, and some of them have been restored in recent times. The ninth century St. Ciaran’s Church contains the former grave of St. Ciaran. In Clonmacnoise you can also visit the Cathedral, which was originally built in 909 and partly restored not long ago. A number of unique Celtic crosses, which are of a special interest, miraculously survive here to this day. One primary school in Dublin is dedicated to St. Ciaran.

St. Ciaran of Clonmacnoise, one of the most celebrated fathers of Irish monasticism, should be distinguished from another illustrious saint with the same name—St. Ciaran (Kieran) “the Elder”, Bishop of Ossory and Abbot of Saighir, who lived in the late fifth‑early sixth centuries.

Holy Father Ciaran of Clonmacnoise, pray to God for us! Venerable Comgall, Abbot of Bangor in Ireland
Commemorated May 10/23

Venerable Comgall, Abbot of Bangor in Ireland
Commemorated May 10/23
Dmitry Lapa
St. Comgall is venerated as one of the greatest confessors, spiritual fathers and ascetics of his age. The biographer of St. Columban, Jonah of Bobbio, wrote the following of St. Comgall: "He was a great father of monks in Ireland, noted for his perseverance in teaching and strict discipline." St. Comgall was venerated all over Ireland.

Venerable Finnian, Abbot of Clonard
Commemorated December 12/25
Dmitry Lapa
The disciples of Clonard established hundreds of churches and monasteries in Ireland as well as in other countries. According to a custom which existed in Clonard, every monk who left the monastery as a missionary took with him a copy of the Gospels, a crozier and some holy object and later, when building his own church or monastery, placed these relics inside it.
Comments

Reader Andreas Moran9/24/2014 3:22 pm
Many thanks for this article which brought back memories of my own visit to Clonmacnoise last year. Even after so many centuries, there is still a mystical atmosphere there.

Russian readers will be interested in a new book which has just been published: Раннее христианство на Британских островах by Балашова Л.С. It is available through Amazon (just type in Balashova).

Helen9/23/2014 12:33 am
I am so grateful for publishing materials of these wonderful Anglo-Saxon and Celtic saints. Very interesting and edifying.