History tied to feast of the cross 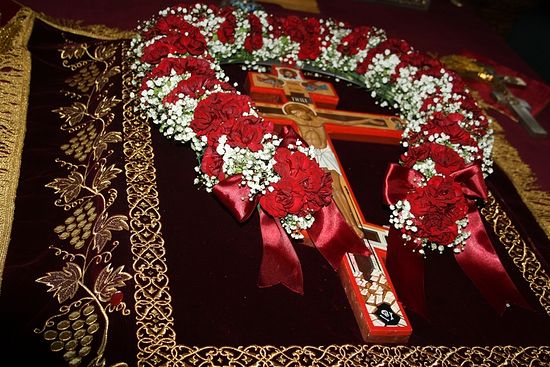 In Orthodox churches Sunday [this Saturday, old calendar—OC], crosses will be adorned with flowers.

The cross is the heart and soul of the Christian faith. It has been the source of devotion in life and comfort in death. The sign of the cross has been, since the earliest times, the act that has preceded, attended and closed the actions and thoughts of faithful Christians.

Yet despite the theological and salvific basis of the cross and our Savior’s sacrifice upon it, the origins of the great Orthodox feast we celebrate, Sunday the Elevation — or Exaltation — of the Precious Cross, has a distinctly historical flavor to it.

The first three centuries of the Church saw great persecutions; Christians were routinely and brutally put to death for professing their faith. The accounts of the martyrs are a testimony.

For it was in that year that the Byzantine Emperor Constantine, preparing his army to engage in a crucial battle against the pagan Emperor Maxentius, saw emblazoned against the evening sky the huge form of the cross with the inscription “By This Sign Conquer.”

This was the turning point in the history of his life and that of the Church.

Constantine interpreted the vision as a mandate from the Lord, and ordered the symbol placed on the banners of his army. He defeated Maxentius and went on to Rome in triumph.

After his victorious entry into Rome, he issued an edict that brought freedom to Christianity and an end to the persecutions.

However, years later, in 326 to be exact, it was the Emperor Constantine’s mother, Helena, who while on a pilgrimage to the Holy Land to search for sacred relics that could be preserved, found that most sacred and precious of all relics, the wood on which Jesus died — the cross of our Savior.

Tradition has it that she was guided to the place of the crucifixion by an aged Jew named Cyriacus, who had inherited the secret knowledge of it.

After the ground had been dug to a considerable depth, the holy sepulcher and then the three crosses were found, that of our Lord being known by the immediate healing of a dying woman who was laid beside it.

Another story claims a dead person was raised to life by contact with it.

Yet the tradition of the cross does not end with its finding. It continued to have an interesting history.

For years the cross lay intact, venerated by the faithful at Jerusalem.

In 614, the Persians, under King Chosroes, crossed the Jordan and became masters of the land. They treated the Christians with great barbarity, killing many and burning churches.

They carried away sacred vessels from Jerusalem, and the cross, which was kept in a jeweled case.

Heraclius, the Roman emperor, tried in vain to recover the cross, and finally by 623 he began to gain an advantage over Chosroes, and in 627 he defeated him in a great battle, eventually pursuing him into Persia.

The Persians sued for peace, and soon the cross was restored to the Church of the Holy Sepulcher.

The Patriarch of Jerusalem, Zacharias, made the emperor lay aside his imperial garments and enter Jerusalem barefoot and simply clad, holding the cross. The seals of the jeweled case, which had not been broken, were now cut and the case opened, exposing the wood to the people. All desired to see and venerate the cross. The patriarch raised it on high and blessed the multitude. And so was born the “Elevation of the Cross.”

This ritual still forms part of the Orthodox observance of the day. The cross is borne in solemn ritual by the priest and carried to the center of the church, where the faithful come and venerate it.

And it is on this Feast Day in remembrance of the mystery of the cross that Orthodox Christians sing with joy the familiar hymn: Before Thy Cross, We bow down in worship, O Savior, And Thy holy Resurrection, We glorify.

The Rev. Andrew D. Nelko is pastor of St. John the Baptist Church in Campbell.