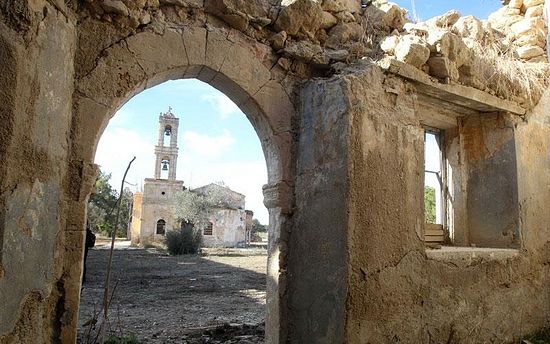 Until 1974 there were 575 churches and other Christian shrines on the territory of Cyprus, now occupied by Turks.

During the Turkish invasion and the subsequent occupation many churches were destroyed. Others were adapted for the use of livestock businesses: stall boxes as well as silage, building materials and technical equipment depots. Some of them were simply sacked or bulldozed.

Around 80 temples were converted into mosques. 20,000 icons, dating back to the 12th-20th centuries, vessels and mosaics were stolen from 575 churches.

As a result of the strong foreign policy pressure and the interference of the UN, the situation with the icons has started to improve over the past year. Nevertheless, ancient churches are gradually crumbling due to the lack of any restoration work since 1974 to the present time. In order to understand what happened and is happening today in this region, the Greek website Romfea addressed the Church of Cyprus.

Bishop Porphyrius of Naples has referred Romfea to Priest Savvas Hagiionas, representative of the Synodal Committee for the Monuments on the occupied territory. According to him, about 50 churches, which are of international cultural importance, are absolutely inaccessible, as they are situated on the territory of Turkish military bases.

In collaboration with international organizations, some of relics were returned. In February 2012, the 12th century wall paintings were returned from Houston (Texas, USA). In October of last year, dozens of relics, for which the Church had been searching from 2004 to 2013 through various agencies, were brought from München (Germany).

“Now we demand the return from Zurich of a 16th century icon of the Savior and an iconostasis of the same period, which belonged to the Antiphonitis Monastery (Kalogrea village),” said Fr. Savvas. “The Church will not cease its attempts to return the stolen relics!” Archbishop Chrysostomos II: Cypriots are victims of the Turkish invasion
“Cyprus, by its geographical position in the east of the Mediterranean, is the crossing-point of Europe, Asia and Africa. And its residents, peaceful and quiet people by nature, have over last forty years constantly fallen victim to the disorder brought here by the barbaric Turkish invasion."
Comments
×