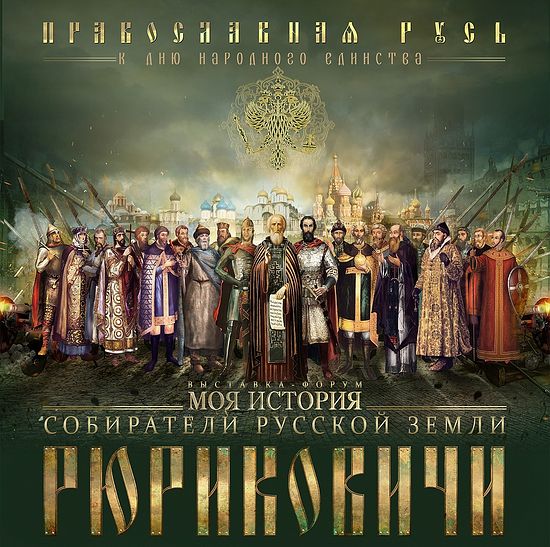 On November 4-20, 2014, with the blessing of His Holiness Patriarch Kirill of Moscow and All Russia the exhibition, “My history. The Rurikovichi” (the descendants of Rurik) will take place at the Manege Moscow central exhibition hall. The 700-year-long history of the Ancient Rus’ will be represented in 18 multimedia halls with a total area of 4,000 square meters (c. 43,100 square feet).

The age of the Rurik dynasty was rich in the events that exerted a decisive influence on the formation not only of Russian statehood, but of all the sides of Russian life: the foundation of ancient cities and towns, the Baptism of Rus’, the 200-year-long Mongol-Tatar Yoke and how it was overthrown, the struggle with foreign invaders, the transformation of Moscow to one of the centers of European socio-political life, and the establishment of a strong state with its distinctive character. These significant events and periods of history will be represented at the exhibition through several hundred multimedia stands and exhibits.

The events of the distant past, created by historians, artists and specialists in the field of advanced computer technology, such as those in The Tale of Bygone Years (a chronicle of history of Kievan Rus’ from 850 to c. 1100, which is considered to be a fundamental source for the early history of the Eastern Slavs), the history of ancient trade routes and legendary battles, the mysteries of fortified strongholds and great victories and little known facts of the period of division among principalities and of the Mongol invasion, will literally come to life before the audience. Great deeds of heroes and diplomats, examples of holiness, sacrificial maternal love, bitter lessons of apostasy and betrayal and many other stories will be displayed before the exhibition’s visitors. Widely known and forgotten pages of history will become an unexpected key to understanding of the present for attentive guests.

A revered Icon of Venerable Sergius of Radonezh will be brought to the exhibition from the Holy Trinity – St. Sergius Lavra.

The project pages in social networks: Festivities in honour of 300th anniversary of the legendary Transfiguration Church take place on Kizhi island
The extensive cultural program of the celebrations of the 300th anniversary of the Transfiguration Church began on August 15. Within the span of five days, numerous folk bands from Karelian districts performed for the visitors to the island, the Kizhi fair, and “The day of Kizhi Volost” holiday, open-air exhibitions and concerts were held.

Russians line up for the Romanovs
People stood for hours to visit a recent exhibition at the Manezhnaya Square dedicated to the 400th anniversary of the House of Romanov.
Comments
×