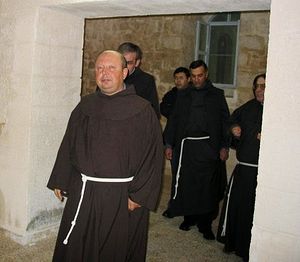 A priest and 20 other Christians kidnapped by Al-Qaeda’s affiliate in Syria this were released Thursday, the Franciscan order said.

“Father Hanna Jallouf has been released this morning ... He is under house arrest at the convent of Qunyeh,” the order said, without providing further details.

A Franciscan spokeswoman later confirmed to AFP that the other captives were also released.

Rebels linked to the Nusra Front, Al-Qaeda’s Syria branch, abducted Jallouf and the others Sunday in the northwestern village of Qunyeh, near the Turkish border, the order said.

A local activist said Nusra had been trying to take over some of the Franciscan properties in Qunyeh, prompting Jallouf to complain to an Islamic religious court last week.

Nusra rebels have seized several Christian and Muslim villages in the area during the course of Syria’s three-and-a-half-year civil war.

The Franciscans, a Roman Catholic religious order that has operated in the country for more than eight centuries, have 19 people working there. They have been working in Qunyeh for 125 years, the activist said.

Kidnapping is rife in Syria, with all sides accused of abducting people.

Civilians have often been targeted for ransom, while extremists such as the Nusra Front and ISIS group have seized journalists, aid workers and soldiers, as well as civilians and rival opposition fighters.

In August, rebels that included Nusra kidnapped more than 40 Fijian U.N. peacekeepers in the Syrian-held sector of the Golan Heights. The troops were released two weeks later.