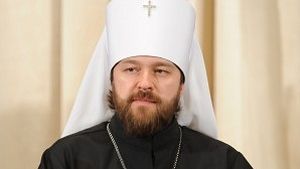 The Moscow Patriarchate official urges Greek Catholics to abstain from participating in Ukrainian politics and supporting schismatics in the country.

"On behalf of the Russian Orthodox Church, I would like to address the representatives of the Ukrainian Greek Catholic Church present in this hall with an appeal to renounce any statements on political topics and any visible forms of support of the schism as well as calls to create "one Local Church of Ukraine," head of the Synodal Department for External Church Relations said speaking on Thursday in Vatican at the General Assembly of the Synod of Catholic Bishops, the DECR press service reports.

He noted that they "wish to tear away the Orthodox faithful in Ukraine from their Mother Church, the Moscow Patriarchate, with which Ukraine has been bound by age-old blood ties."

"Regrettably, the conflict in that country, which has already taken the lives of thousands, from the very beginning has acquired a religious dimension. A significant role in its conception and development has been played by the Ukrainian Greek Catholic Church. From the very first days of the conflict, the Greek Catholics identified with one of the sides of the confrontation. Contrary to the respect for canonical norms prevailing in relations between the Catholic Church and the Orthodox Church, the Greek Catholics have entered into active cooperation with the Orthodox schismatic groups," the hierarch said.

He reminded that the Joint Commission for Orthodox-Catholic Dialogue, as far back as 1993 in Balamand, recognized that Uniatism is not the way to unity.

"We are grateful to our Catholic brothers for their open recognition of the mistakenness of Uniatism," the Russian church official said. Russian Church accuses Uniates of enticing violence against Orthodox Christians in Ukraine
The Moscow Patriarchate has again expressed its concerns about the support provided to Ukrainian radicals by Greek Catholics (Uniates). Statement by the Synodal Information Department Regarding the Death of a Priest, and Threats to Religious Peace in Ukraine
The number of victims of the civil confrontation in Ukraine is multiplying every day. On July 31, a cleric of the Church of St. George in the Lugansk diocese, Archpriest Vladimir Kresliansky, died of wounds received during the shelling of residential areas of Lugansk. His five children have been left orphans. New reports are coming in about acts of violence against churches of the Ukrainian Orthodox Church and her clergy who have found themselves in a battle zone.