“Our country has been unconditionally surrendered to foreign invaders. It is now not so important that the monuments of culture are falling into disrepair—we are losing Christian Greece!” reads the statement of Metropolitan Amvrosios of Kalavryta, cited by the Romfea portal. 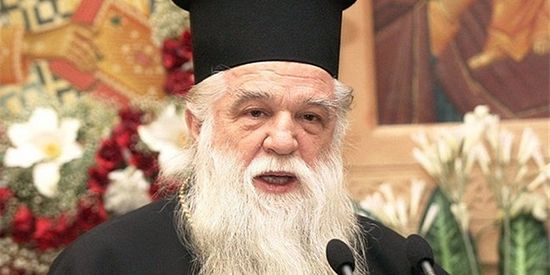 “Unfortunately, they are in every way supporting the development of Islam as a religion; more than that, at the same time they are promoting immigration of Muslims to Greece in great numbers in order to neutralize the Christian orientation of our motherland,” said the Metropolitan.

The hierarch then described the crimes committed by the jihadists (militant islamists):

“Look at this bloodstained hand of a young woman, all in wounds, holding a small crucifix! She was cold-bloodedly murdered by jihadists! Or look at a photograph of the poor African Christian, burnt alive straight on the road”.

“Our country’s leaders attach no importance to what is going on,” he states. “And what is more: they have already resolved to build a mosque in the very heart of Athens, in the “Botanical” district. And this is at the expense of the state budget to boot!

According to our information, the construction of the mosque will cost 80 million euros and will be paid allegedly from the income of the Ministry for Foreign Affairs.

And all this is taking place during the terrible economic crisis when there is always a lack of money for ordinary honest citizens,” the metropolitan’s statement reads.

“Moreover, before long we will not be able to talk about all this and write these things as the anti-racist law will put a veto on this,” the archpastor stressed.

“Our country has been unconditionally surrendered to the foreign invaders. It is now not so important that the monuments of culture are falling into disrepair—we are losing the Christian Greece!” the hierarch noted in conclusion.

Metropolitan Seraphim of Piraeus: “By passing the ‘Anti-racist law’, the state deceived the Church”
The same processes are going on in the countries that have joined or are intending to join the European Union: thus, an “Anti-discrimination law” recently has been passed in Georgia, and now an “Anti-racist law” was passed in Greece.
Comments

Jeanne6/14/2017 2:35 pm
In Canada, if you want a place of worship, the community builds and pays for it, not the Canadian government.
Greece is in no financial condition to build any place of worship.

sister theonymphe12/24/2016 6:01 pm
Yes, our metropolitan has spoken out when we are too shy. There should be treatment for every affliction. Warm welcome, removal of lax ways,demonstrating unflinching faith and love of country.We all see the rapid changes but His Grace doesn't mince his words. Bless, Bishop.

Adriann Giovanni9/3/2015 2:23 pm
Yes, but they cannot take away our Faith !! No matter what the Globalization of the World may hold , like the first Christians who held strong in their Faith while facing the Lions and onto Martyrdom ..

We will always be Strong , we have nothing to Fear , and we will Pray together from the Holy Scriptures and Rejoice in his Word and his Word is Love ...

Glory to God in the Most Highest !!

Nicholas Anagnostis10/23/2014 4:25 am
We Orthodox in America thank His Excellency, Metropolitan Amvrosios, for speaking out so bravely and boldly on this matter in this time of ever increasing persecution. The unholy coalition His Excellency refers to, spawned by the synagogue of satan, seeks to destroy Christianity throughout the world. The case of Greece is particularly tragic given her immeasurable and incomparable contributions to Christianity, and to civilization at large. May our Lord and His Blessed Mother the Theotokos give comfort to His Excellency, and to all faithful Orthodox Christians in Greece.

God bless him much!