The Feast of the Iveron Icon of the Mother of God, and the Veneration of Holy Icons 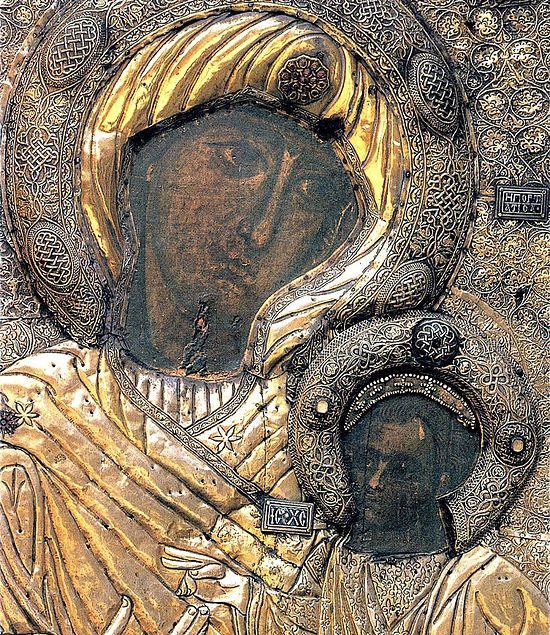 According to tradition, in the ninth century this icon floated in a miraculous way on the sea to the Holy Mountain of Athos. The monks of the Georgian Iveron Monastery on Athos saw the icon in the sea, upheld upon a fiery pillar. Having received instructions in a dream from the Mother of God, St. Gabriel the Hagiorite walked upon the water and brought the icon to the Iveron Monastery.

God has many times wrought miracles through this icon of the Mother of God—not only through the original icon but also through copies of it, one of which was brought to Moscow in 1648 during the reign of Tsar Alexei Mikhailovich.

The miraculous appearance of the icon of the Mother of God in the ninth century, during the era of iconoclastic dispute, was literally a confirmation “from above” of what had been pronounced at the Seventh Ecumenical Council on the veneration of icons. After scrupulous investigation of biblical citations and various opinions on icons by 367 fathers of the Council, the following was established:

“That the venerable and holy icons, both of our Lord and God and Savior Jesus Christ, and of our Holy Lady Theotokos, and also of the precious Angels, and of all Saints, painted or mosaic, or made of any other suitable material, be placed in the holy churches of God upon sacred vessels and vestments, walls and panels, houses and streets.”

For the more frequently and oftener they are continually seen in pictorial representation, the more those beholding are reminded and led to visualize anew the memory of the prototype which they represent and for whom moreover they also beget a yearning in the soul of the persons beholding the icons. Accordingly, such persons are prompted not only to kiss them and to pay them honorary adoration—what is more important, they are imbued with the true faith which is reflected in our worship, which is due unto God alone and which befits only the divine nature. But this worship must be paid in the way suggested by the form of the precious and life-giving Cross, and the holy Gospels, and the rest of the sacred institutions, the offering of incense, the placing of candles before them, to be done for the purpose of honoring them, just as it used to be the custom of the ancients to show their piety. For any honor paid to the image redounds upon the original, and whoever bows down in adoration before the icon, is at the same time bowing down in adoration to the substance (or hypostasis) of the one thereon depicted.”

The thought runs like a thread through this statement that the practice of venerating icons, just as the veneration of those who pleased God and of their relics, is different from the worship of the One God. True service in faith can relate only to God. However, because God did not disdain human nature but took it on in the person of Jesus Christ, as according the apostle Paul, For in him dwelleth all the fulness of the Godhead bodily (Col 2:9), therefore Christ can be depicted and we can honor His image.

Although it would seem at first glance that the second commandment of Moses forbids the creation of any graven images of visible and invisible things, it can be seen from the Bible that this is not the case. God Himself commanded Moses to make an ark with a depiction of the cherubim (cf. Ex. 25:17-22). On the walls of the temple in Jerusalem there were not only pictures of the cherubim, but also of palm trees and flowers (cf. 3 Kings 6:29). And this does not contradict God’s commandment “not to make for yourselves idols.”

Ancient Christian icons in the form of wall paintings of Biblical scenes and depictions of the cross date back to the first century A.D.. They have been discovered in excavations in the cities of Pompeii in Italy, which was covered by lava and ash in the year 79. Those were still apostolic times, as fifteen years prior to this the apostle Paul was preaching ten kilometers from Pompeii in the town of Puteoli (cf. Acts 28:13). In the catacombs of Dura-Europos in Mesopotamia, Christian frescoes with depictions of the Virgin Mary dating to the second century have been preserved to our times.1 In Roman catacombs even now we can see frescoes from the second and fourth centuries A.D., showing scenes on the theme of the resurrection of Lazarus, the symbols of the anchor, the fish, and the image of Christ as the Good Pastor or the Lamb. The third century writers Tertullian, Minutius Felix, and Origen witness to the fact that Christians of their times venerated the sacred image of the Cross. St. Basil the Great asked artists to depict the feats of the holy Martyr Varlaam in paint. That by the fourth century the use of icons in churches was ubiquitous is proved by the words of St. Basil: “I receive also the holy apostles, prophets, and martyrs and call upon them to intercede before God, that through them, through their intercessions, the man-loving God will be merciful to me and grant me remission of my sins. I honor also their depiction on the icons and bow down before them especially because they were bequeathed from the holy apostles and not forbidden, but depicted in all our churches.”

Thus, the Seventh Ecumenical Council, which we commemorate today, did not introduce anything new in the way of the veneration of icons, but rather interpreted what had already been discussed earlier, and articulated the language of its acceptance.

Of all the words spoken at the Council in defense of icons, the words of John of Thessaloniki particularly draw our attention: “We make icons of those who were people and servants of God, and bore flesh. We do not depict some bodiless beings in physical form. If we make icons of God, that is, of our Lord and Savior Jesus Christ, then we depict Him as He was seen on earth, when He lived among people.

After citing biblical information on the cherubim in the tabernacles and in the Jerusalem Temple, the Ecumenical Council proved through patristic citations the psychological naturalness and value of icons in religion, and thereby shed light upon the works of the artists themselves: “The art of the [icon] painter is a sacred occupation…” and “the holy fathers represent the artist [iconographer] as a man who does a pious work.”

The Greek word, “icon”, means “image”. Man lives in a world of images. The entire surrounding reality that we observe is marked in our consciousness as a collection of images. When a certain reality is reflected in another material, an image is created. A picture drawn according to an artist’s conception is the image of that conception. The memory of another person or the replay in the mind of some event is the remembrance of their images. A word by which an object is defined is also an image. We understand objects and events to an extent equal to our ability to accommodate an understanding of them and their images. Therefore, the Gospels themselves are an image of Christ and His disciples, described in words.

Thus, also all culture, from music to sculpture, from literature to painting, is in fact the various ways of transmitting images. By the same token is man’s cultural development the learning of how to live in the world of correct, lofty, and harmonious images. By rendering honor to the image we are raised to the prototype. By giving honor to the artist we honor the One Who inspired the artist to create the work of art.

Just the same, it is necessary to emphasize the educational-formational meaning of culture. The holy fathers did not sanctify every kind of art. They opposed not only idols, but also fetishes and blasphemous use of images. The work of an artist becomes sacred when the artist uses his God-given talent for the glorification of God’s name, and not for his own glory.

One of the problems of our times is people’s omnivorous behavior. The “mega-market” has not only become a means of satisfying our consumer interests with regard to food, but also to other sides of [earthly] life: furniture, pictures, music, theatre, and cinema. We have become specially omnivorous in regard to films. Most of our parishioners, of course, would never say that they worship or serve cinema as they do God. But let’s take a look at how much time modern man wastes on unnecessary news, empty TV serials or films. It is hard for us to concentrate for ten minutes on our evening prayers, but we are ready to sit the armchair for hours, nights, and days watching empty films. Empty, and even vulgar images rapidly impress themselves in our memories. They appear before our eyes day and night; they come to mind even during prayer.

God forbade Moses to make graven images of men and women, birds and animals for a very important reason: Lest ye corrupt yourselves (Deut. 4:16). Therefore, it is not art in and of itself, the embodiment of images in material that is sinful, but rather those idols and images that lead a person to depravity.

Remembering this, dear brothers and sisters, let us honor the holy images of Jesus Christ, the Mother of God, and the saints, rendering honor to the prototype, to the persons depicted on the icons. Let us emulate the lives of the saints and avoid all kinds of spectacles that lead a person to depravity.

1 Dura Europos is an ancient city in Mesopotamia that was abandoned after its conquest in 256–7 and no other edifices were erected over it, thus enabling archeologists to form an accurate picture of its life. Since the onset of the recent war in Syria, the site has been severely looted by Islamist.
See also The Iveron Mother of God, and the Myrrh-Streaming Icons of Hawaii

The Iveron Mother of God, and the Myrrh-Streaming Icons of Hawaii
In June of 2008, the “Hawaiian” Myrrh-streaming Iveron Icon was officially recognized by the Russian Orthodox Church Outside Russia as miraculous and worthy of veneration, and was given the blessing to travel to the various churches and monasteries of Holy Orthodoxy. The original “owner” of the Icon, Reader Nectarios, was charged by the Russian Orthodox Church to be Her guardian, and provide for the safety and care of this Wonderworking Icon of Christ’s Holy Church.
Comments

Fr William Bauer2/25/2020 7:40 pm
About 18 months ago I had a urinary tract infection. The prescribed medication was worse. A fellow clergyman mailed to me myrrh from the Icon. I was without symptoms 24 hours later. Praise the Lord.

Steve Cox10/26/2018 6:25 am
The Hawaiian Iveron Mother of God made it's way to Alabama yesterday. I have never seen anything like it. Myrrh streaming from the icon. By human standards this is impossible but it happened. We actually have some of this sweet smelling myrrh in our home. I don't know how to express the feeling of this.
×