On the night of October 23 to 24 the windows were shattered in the Rivne Diocese’s administration building, reports the press service of the Ukrainian Orthodox Church of the Moscow Patriarchate. 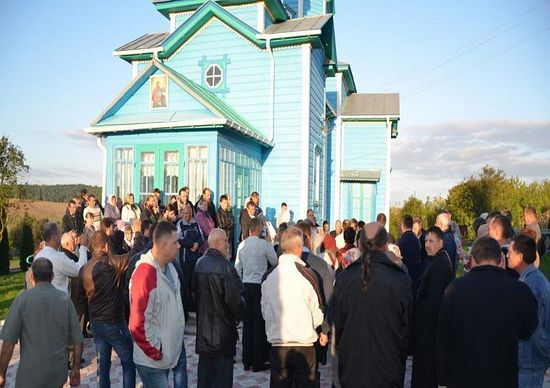 The day before, there were several unsuccessful attempts to forcibly seize the Holy Trinity Church in Povcha village of the Dubno district of the Rivne region, when Priest John Savchuk was seriously injured (with an internal brain injury and a brain concussion).

On October 19 the schismatics also attempted to make an attack on the church. In spite of the physical and moral pressure from the “Kyiv Patriarchate” and “Right Sector” extremists, the church was rescued from the seizure on that day. It was decided to lock and seal the church in order to prevent development of the conflict.

However, several days later, on October 21, in the village headman’s presence, the schismatics took the locks off the church doors and hung their own locks.

Thus, the church building as well as all the property inside were taken away from the legal owner—the parish of the Holy Trinity Church.

Despite the numerous police reports and applications to the district’s administration, the local government is refusing to consider the case.