No Longer the House of God.

In the Orthodox Christian tradition, a church that has been consecrated by a bishop must remain in use as a church. This is not something taken lightly, and is the reason why a bishop may not consecrate a church if he is not entirely sure that the building will always be used as such. It is also why the Russian Orthodox Church is endeavoring where at all possible to restore the churches in Russia that were destroyed by the godless Communist regime.

The Roman Catholic Church, however, has a rite called “desanctification” that “frees” the church to sell its property to entirely secular concerns, and this, unfortunately, is what is happening in many Western countries. In some places the Catholic authorities try according to conscience to find new owners that will put the property to a charitable purpose, as in the Netherlands. In that country, you will now find many former Catholic convents used as clinics, sanatoriums, schools, and even as Orthodox monasteries—a highly commendable policy for which the Dutch Orthodox are very thankful.

In other places, unfortunately, you will find quite a different picture. In Italy, for example, there are some church properties for which title conferred to the families of benefactors, and the Church no longer has control over their sale. In some cases, the Church itself sells the property after “desantification.” One such example is a monastery in the tourist town of Taormina in Sicily, where an old monastery now functions as a five star hotel. There are many other such hotels in Italy, presumably because there were once many working monasteries.

This article was translated from the German website SPIEGEL-ONLINE, which made no comment from the religious standpoint other than a somewhat ironic tone, although a good deal of reader commentary appeared on the original page. To our great dismay, most of those who left comments were in favor of such use, mainly for purely pragmatic reasons. One lone comment lamented the decline of Christian sensibility in Europe, and expressed fear for the future. OrthoChristian.com would be very interested to hear what our readers have to say about this issue.

More and more churches in Italy are being sold into private ownership. New owners often use these buildings at their pleasure: arrange their offices, pizzerias or even auto-repair shops. 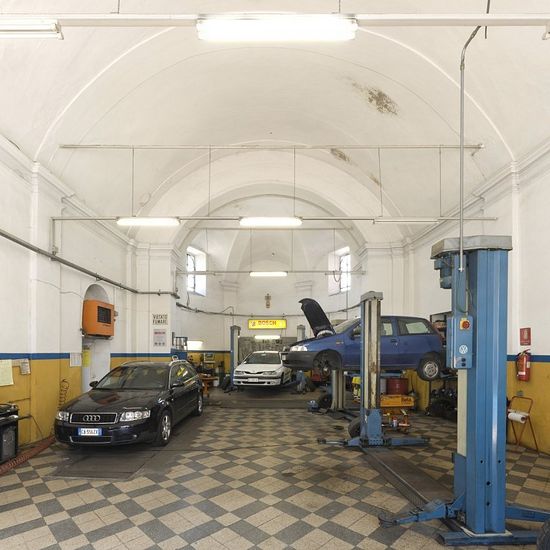 There is now an auto-repair shop in the former church in the Como community on lake Como. Where worshippers formerly dipped their fingers into the stoup with holy water and made the sign of the cross before entering the church, now drivers can change engine oil in their cars.

Italy is currently in a deep recession, so people have to save on everything. As there is no more money for restoration of churches and keeping them in good condition, churches are denuded of their status of places for public worship and sold.

New owners can use former churches at their pleasure. Italian photographer Andrea di Martino has shot a great number of former houses of God. Striking pictures opened up before him behind the massive church doors.

There is now an auto-repair shop in the former church in the commune Como on the lake Como. In the white-yellow Portichetto-Luisago, where worshippers formerly dipped their fingers into the stoup with holy water and made the sign of the cross before entering the church, now drivers can change engine oil in their cars. 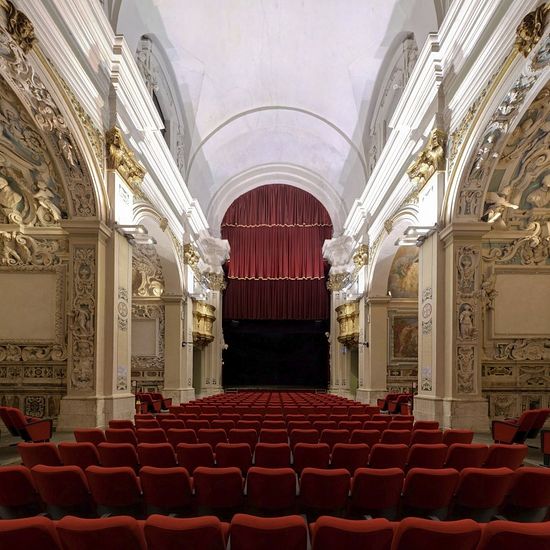 Stalls of red velvet below the images of angels. The former San Filippo Church in the commune L’Aquila is now used as a theatre. When there is a lack of money for restoration of churches, in Italy they are sold into private ownership.

There are red velvet stalls inside the former San Filippo Neri Church in L’Aquila. Since 1987 the “San Filippo” theatre has been located here. Angels look down from the ceiling of the play performed on the stage. Applause. 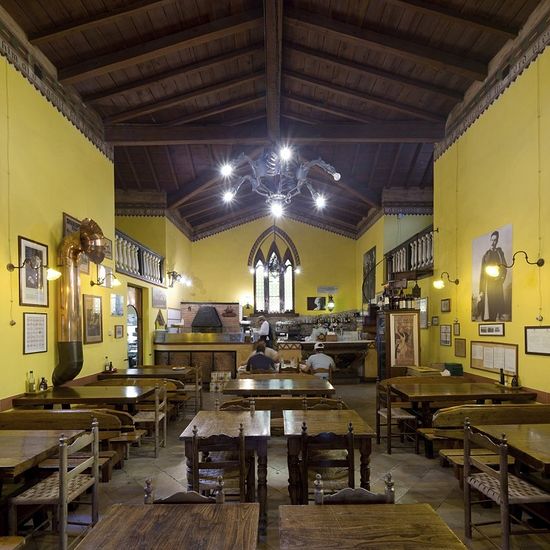 A pizza or a communion wafer? It makes no difference: both are round. In the former All Saints Church in Viareggio, where sermons on morals were once delivered, now people treat themselves to wine: the new owners have opened a pizzeria in the building.

In the former All Saints’ Church in Viareggio, where sermons on morals were once delivered, now people treat themselves to wine: the new owners have opened a pizzeria in the building.

Photographer Andrea di Martino says he is religious, though he does not attend services every Sunday. He visits churches solely for his photographs. “I liked all of them. I like places with history. I had such a feeling in all these churches,” di Martino says. “Over the past centuries they saw so much, went through so different times and people. There is an absolutely special atmosphere there.”

He really enjoyed the auto-repair shop, as it was among the first churches restructured for different functions, of which he took photographs. “When I went out of it I felt that I wanted to know by all means what happened with other churches,” di Martino recalls. Thus his travels to “God’s” restaurants, hotels, and designer clothing stores began. By now he has shot 70 churches. 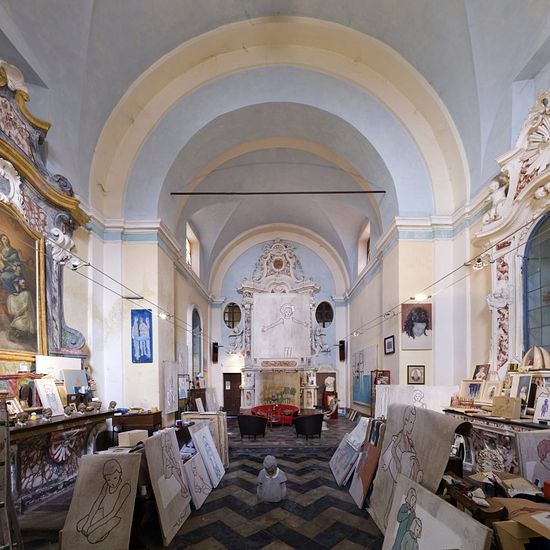 No, these are not images of saints depicted on the pictures. The former San Rocco Church in Verduno now belongs to artist Valerio Berruti who transformed it into his studio and home. 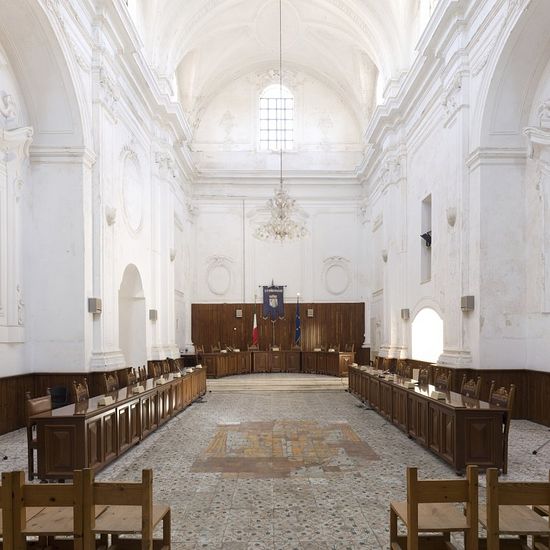 Beyond a doubt, perfect decisions (in terms of the human morals) are made here: a conference hall in the former St. Philomena’s Church in Ugento. 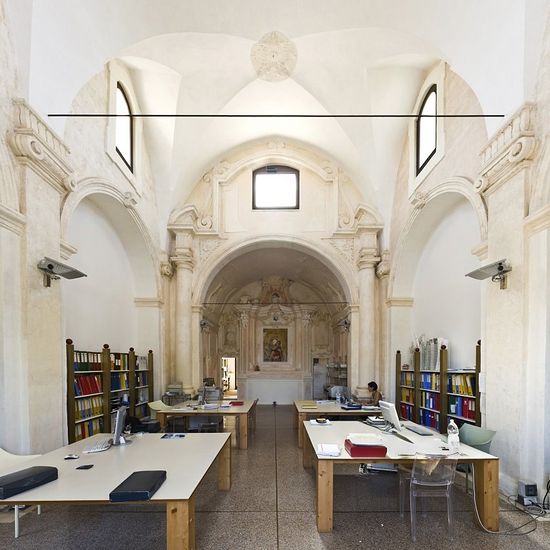 Modern buildings are designed here, aren’t they? Today the former Church Madonna del Carmine via Gallipoli is an architectural bureau. 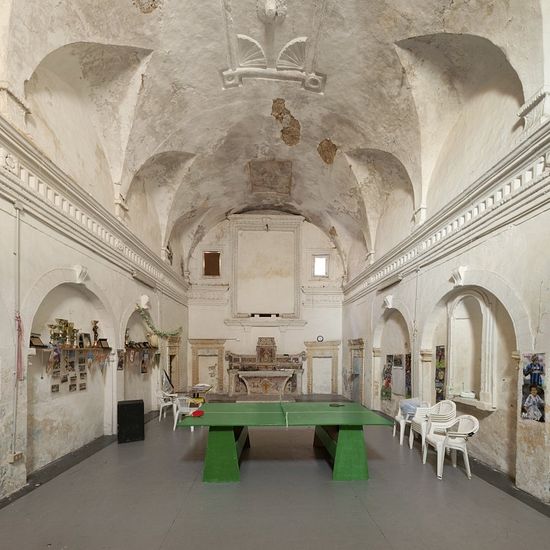 What about playing ping-pong? Today no one is expected to sit still in the former Santa Lucia Church in Montescaglioso. 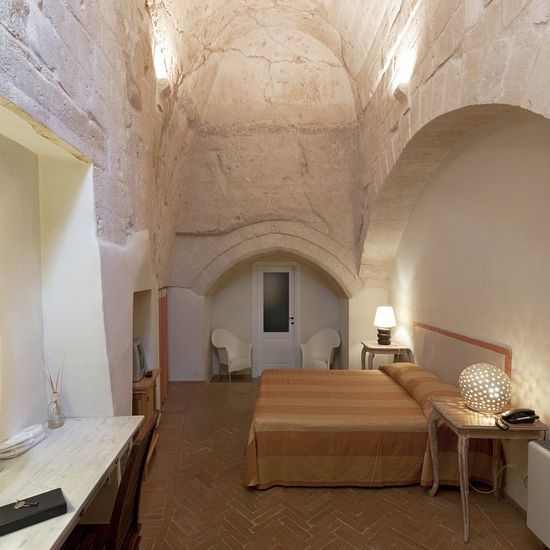 Pious dreams: today a hotel is offering accommodation to guests in the former San Martino Church in Matera. 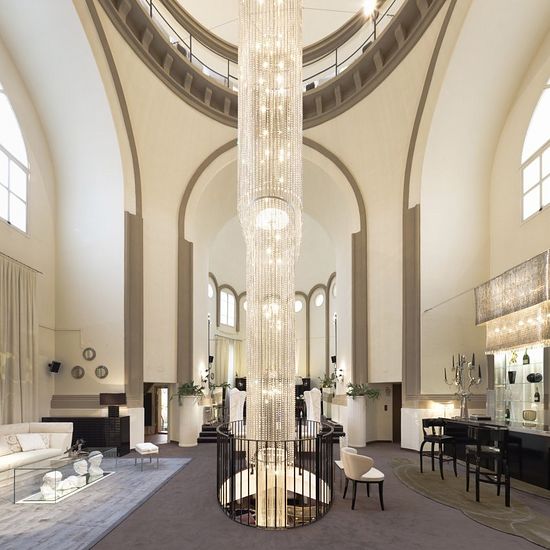 Joe Cocchiarelli4/8/2021 5:22 am
Why report on this without reporting on the source of the evil that controls these Northern Italian dioceses? There is only one Archpriest in Rome who now represents the Chinese Communist Party and is actively seeking to destroy the 'catholic' faith worldwide including Orthodoxy by making inroads through its satanic agents: Rothschild/Soros. These are the instigators of the Ukrainian Schism. There is one patriarch who stands up to this Roman madman posing as a leader of Christians: Kirill, Patriarch of the Russian Orthodox Church. Until the rest of the Orthodox leaders openly denounce the latest attempts of the Northern Italian heretics, why even bother to mention this latest of many outrages against the Body of Christ?