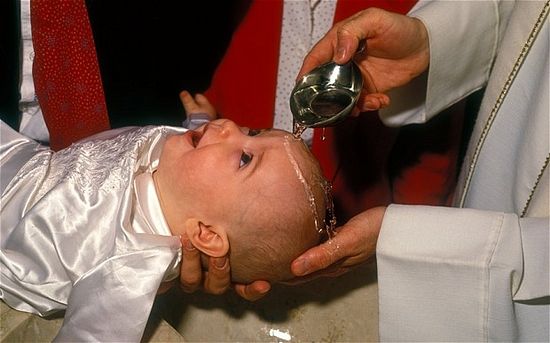 The Church of England has been accused of “dumbing down” its traditional christening ceremony after rewriting the service for a modern congregation.

Parents and godparents are no longer asked to “reject the devil”, “repent of sins” or “submit” to Christ under the new wording, aimed at making the service easier to understand.

But critics claim the new version strips out “key elements” of the baptism service and undermines its meaning, according to the Mail on Sunday.

The new text, which is supported by the Archbishop of Canterbury Justin Welby, removes the questions, ‘Do you reject the devil and all rebellion against God?’ and ‘Do you repent of the sins that separate us from God and neighbour?’, which prompted the replies. 'I reject them' and 'I repent of them' respectively.

Now the vicar will ask: “Do you reject evil? And it all its many forms? And all its empty promises?”.

There is no mention of the devil or sin in the new service which is already being used in 1000 parishes and is now to be tested in a trial lasting until Easter.

The congregation is no longer asked to “submit to Christ as Lord” as the idea of submission is considered too controversial, particularly for women.

The new service will be offered as an alternative to the traditional version found in the Common Worship prayer book but is likely to become the favoured text for most christenings if it is approved by the General Synod, according to Church insiders.

The church’s governing body may discuss introducing the text on a permanent basis as early as the summer.

It was drawn up after Church of England reformers voted in favour of updating the text, claiming it was no longer relevant to deprived communities.

Arguing for the change, reformer Rev Tim Stratford, the team rector of Kirkby, Merseyside, said: “The language of BBC One would be fine, not the language of a theological treatise, which is I think what we have at the moment.

“The text does matter. You can’t make EastEnders out of Shakespearean tragedy without changing the language.”

But the new version has been criticised for “destroying” the meaning of the baptism.

Writing in the Mail on Sunday, Michael Nazir Ali, said: “Since at least the 1970s there has been a fashion in the Church of England to minimise depth and mystery in its worship because of the alleged need to make its services ‘accessible’.

The new alternative service for baptism, which has been sent for trial, continues this trend. Instead of explaining what baptism means and what the various parts of the service signify, its solution is to do away with key elements of the service altogether.”

He added: “Rather than the constant ‘dumbing down’ of Christian teaching, whether for baptism, marriage or death, we should be spending time preparing people for these great rites of passage.

“When it comes to the service itself, the need is not to eliminate crucial areas of teaching but to explain them.

“It is best to call a halt to this perhaps well-meant effort before it further reduces the fullness of the Church’s faith to easily swallowed soundbites.”

A senior member of the General Synod told the newspaper: “This is more like a benediction from the Good Fairy than any church service.

“The trouble is that large parts of the Church of England don’t believe in hell, sin or repentance. They think you can just hold hands and smile and we will all go to Heaven. That is certainly not what Jesus thought.

“There is so much left out that one wonders why do it at all? If you exclude original sin and repentance there is very little substance left.

“It doesn’t just dumb the service down – it eviscerates it. It destroys the significance of the rite by watering down the concept of sin and repentance.

“A humanist could say ‘I renounce evil.’ If you take out repentance you immediately strike at the heart of the whole idea of needing to be baptised.

“John the Baptist only baptised those who came and were repentant. This rite is saying to people you don’t need to be particularly repentant. Just come and join the club.”

Stephen Platten, the Bishop of Wakefield and chair of the Church Liturgy Commission which wrote the new text, dismissed claims it had dumbed down the service.

He said: “We are certainly not dumbing down. Far from it. What we are concerned about is to make sure that people who are coming to baptism understand what is being said.”

The baptism ceremony had not been altered for more than 400 years until it was changed in 1980 and this will be the third revision in 30 years.

Vicar: Do not be ashamed to confess the faith of Christ crucified

Congregation: Fight valiantly as a disciple of Christ against sin, the world and the devil, and remain faithful to Christ to the end of your life

Vicar: In baptism, God calls us out of darkness into his marvellous light. To follow Christ means dying to sin and rising to new life with him. Therefore I ask: Do you reject the devil and all rebellion against God?

Congregation: I reject them

Vicar: Do you renounce the deceit and corruption of evil?

Congregation: I renounce them

Vicar: Do you repent of the sins that separate us from God and neighbour?

Congregation: I repent of them

Vicar: Do you turn to Christ as Saviour?

Congregation: I turn to Christ

Vicar: Do you submit to Christ as Lord?

Congregation: I submit to Christ

Vicar: Do you come to Christ, they way, the truth and the life?

Congregation: I come to Christ

Vicar: Do you believe and trust in God the Father

Congregation: I believe in God, the Father almighty, creator of Heaven and Earth

Vicar: Do not be ashamed of Christ. You are his for ever

Congregation: Stand bravely with him. Oppose the power of evil, and remain his faithful disciple to the end of your life

Vicar: In baptism, God calls us to new life. We die with Christ to all that destroys, and rise to live with him for ever, Therefore I ask: Do you reject evil?

Vicar: And all its many forms?

Congregation: And all its many forms

Vicar: And all its empty promises?

Congregation: And all its empty promises

Vicar: Do you turn to Christ?

Congregation: I turn to Christ

Vicar: And put your trust in him?

Congregation: And put my trust in him

Vicar: Do you believe in God the Father, source of all being and life, the one for whom we exist?

Congregation: I believe and trust in him No Longer the House of God.
New Life of Italian Churches (+Photos)
There is now an auto-repair shop in the former church in the Como community on lake Como. The former San Filippo Church in the commune L’Aquila is now used as a theatre. In the former All Saints Church in Viareggio, where sermons on morals were once delivered, now people treat themselves to wine: the new owners have opened a pizzeria in the building. An Open Letter To Orthodox Anglicans
Fr. Geoffrey Korz
The fact is, the historical reality of Christ's Church remains undivided and unchanging, waiting with quiet patience for those who would return to Her for rest, stability, the fullness of Truth and joy. How long will those who are thirsty for this continue to visit empty wells, and remain restless and unsatisfied?
×