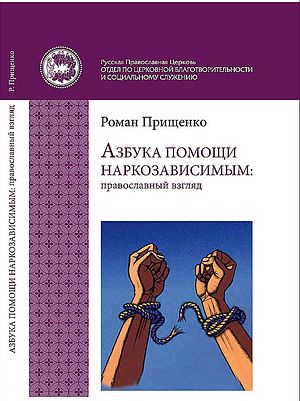 This new book [in Russia] is based on the experience of the Church’s help to drug addicts: there are over 60 active Church rehabilitation centers for drug addicts, dozens of first-referral consulting rooms and other rehabilitation auxiliary structures in Russia, reports the Synodal Department for the Church’s Charity and Social Ministry.

The book reflects the Church’s view of drug addiction, and it will also be of interest to secular specialists in the fields of medicine and drug rehabilition. The book has been written by psychologist Roman Prishchenko, who has over many years worked in the sphere of rehabilitating drug addicts in Church and secular organizations.

The manual explains what the main difficulties for those who wish to help drug addicts are, and why certain methods used in Church rehabilitation practice have proved to be the most successful ones. According to the author, one of the special features of the book lies in this combination of simple language and the depth of the issues touched on.

“We have made an attempt to relate extremely important things in a simple, confidential manner, so that we can dialogue with our reader,” says Roman Prishchenko.

The book gives a detailed description of the stages of the Church’s help to those who are on drugs. The preparatory period lasts from one to three months and includes motivational work: a person’s motivations and his or her attitude to further rehabilitation are ascertained. During the main period, which may last from one to one and a half years, the person becomes part of a parish where a clergyman and volunteers help him or her find ways out of drug dependency. The next stage is re-socialization, which lasts from one to three years. After all these stages the individual who has given up drugs is given permanent support to avoid relapsing and returning to addiction.

The book can be downloaded from the Synodal Charity Department’s website [in Russian].

According to data from the Federal Drug Control Service of Russia, today 8.5 million Russians take drugs and psychoactive substances (nearly 7% of the population of the Russian Federation). This index is critical as on reaching the point of 6-8%, there are irreversible consequences for a country’s gene pool. Every year around 100,000 people in Russia die from taking drugs.

"You Know Where to Go!" St. Xenia of Petersburg comes to Oakland
Nun Cornelia (Rees)
Our biker rode off on his Harley Davidson, and soon had a terrible accident, which cost him his legs. Eventually he landed back in the company of his old “friends”, in a run-down apartment in a low-rent neighborhood in the bad part of a crime-ridden city.